Danny Morgan (Rhys Ifans) is a cement truck driver working in Sydney, Australia and dreaming of his next vacation. His live-in girlfriend (Justine Clarke) thinks that he has no ambition and is losing interest in him. When she cancels their scheduled camping vacation, Danny is desperate. He asks his friends to tie large helium-filled balloons to his folding chair and sits on it. No one expects it to really work, but it does and he sails high into the sky and across the Outback where he eventually crash lands and becomes an interesting addition to a small town called Clarence. Also with Miranda Otto, Andrew Crabbe and Rhys Muldoon. Directed by Jeff Balsmeyer. [1:30]

SEX/NUDITY 6 - A man and a woman kiss passionately, she climbs on top of him, they kiss and lie back on a sofa, she removes her top (we see her bra and bare back) and continue kissing (we hear them moaning). A woman in a bra (cleavage and bare abdomen are exposed) sits in a bed and a man lies on top of her with his head positioned at her lap (there's suggestion of oral sex). A man and a woman kiss tenderly, kneel down on a floor, continue kissing, lie back on the floor and we see them sleeping later with clothes strewn around the room (they are covered by a sheet and their bare shoulders are visible). A young woman invites a man to dance; she moves sensually, pulls him close to her and tries to kiss him. A man falls on top of a woman and they kiss. A man and a woman lie in bed together, she tries to seduce him and he declines. A woman flirts with a man on the phone and while driving in a car. Three men do wolf calls toward a woman. A man poses nude for an art class (all women), he starts with a cloth draped over him, then removes it (we see only his bare chest) and strikes poses that cause the women to scream and hoot. A man in a robe lies on pillows on a floor and a woman (she's clothed) lies behind him (no suggestion of anything physical happening). People talk about art classes and models posing nude. A man telling a story says, "he's becoming aroused." Women talk about a man being attractive and cute in a few scenes. A man says to a woman "got some big stacks there" while serving her pancakes. People make reference to a man having a "fling" with a woman. A woman talks about a man being interested in modeling nude and says, "they say he's got a lot to offer." A man sees his girlfriend riding in a car with another man. We see very briefly a woman in bra and panties. A man takes off his clothes (down to his boxers) and jumps into a river (people stop to watch him). Women wear evening gowns that reveal bare shoulders, backs and cleavage. A woman wears low-cut tops and dresses that reveal cleavage throughout the movie. A man floats in a pool bare-chested and in swim trunks. A man wears his shirt unbuttoned to reveal his bare chest. Men and women dance together, a man invites a woman to a dance, and a man and a woman hug in a few scenes. A woman talks about having lunch and walking on the beach with a man other than her boyfriend. A man in a robe lies sleeping on a sofa in a woman's home.

VIOLENCE/GORE 3 - A man punches a man in the face (he falls to the ground). A man sitting in a folding chair attached to helium-filled balloons floats off the ground, high over a city, and when one balloon pops, he falls out of the chair but catches one of its legs. The man floats into a storm cloud (lightning flashes around him and he is pummeled with rain), a bird lands on his head, fireworks explode around him and one hits a balloon causing it to explode, knocking the man out of his chair and sending him crashing through a tree where he dangles for a moment (a woman sprays him with a fire extinguisher), and then falls to the ground (he has a large cut on his shoulder). News reports tell us that it is possible that a man has died and discuss search-and-rescue efforts for a missing man. A man jumps out the back of a plane, sails through the air, pulls his parachute, crashes into a tree and slams into a wall. A woman drives a motorcycle away from a man whose parachute has become entangled in the motorcycle, the parachute rises into the air pulling the man along, and he crashes to the ground landing on top of the woman (they are uninjured). A woman yells at a man, a man yells at a woman, and a man and a woman argue in several scenes. A man and a woman are angry at each other and slam things around their kitchen (e.g. she slams a cleaver down cutting up pieces of chicken). A man yells at a woman and calls her an insulting name. A man falls into a pool of wet cement, struggles to get out, two other men lift him up and he shakes himself spraying them with cement also. A man disparages a man while talking on the phone. A group of boys on bikes chases another boy on a bike. A man and a woman ride a motorcycle and are out of control for a moment, nearly hitting a car. A man jumps off a bridge and into a river below. A man squirts fluid onto a barbecue repeatedly making flames flare up with each squirt. A woman spins around and falls into a fountain, and many others jump in with her.

SUBSTANCE USE - People are shown drinking alcohol. Men have a drinking contest in one scene.

DISCUSSION TOPICS - Daydreaming, being who you want to be, lying, betrayal, inspiration, creativity, jealousy, relationships, love, friendship, ferocious nature of the press, politics.

MESSAGE - We do not have to lead a miserable existence, we can change our lives even if it means having to float away to do it. 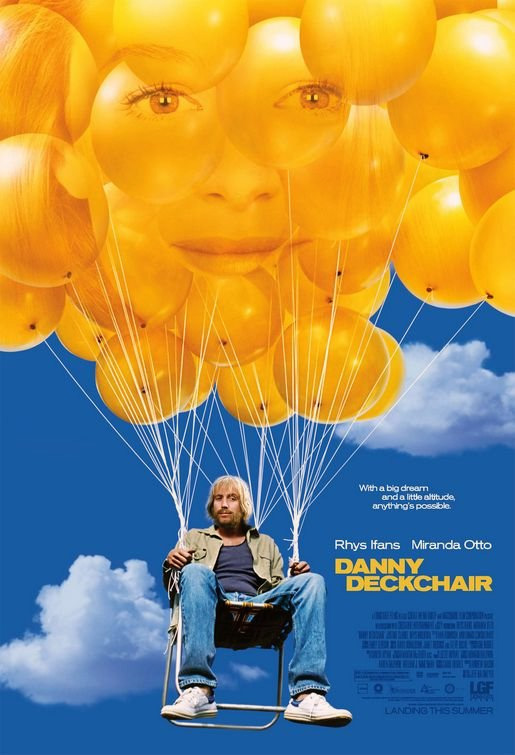