Pixar animated feature about Lightning McQueen (with the voice of Owen Wilson), a cocky, ambitious rookie race car that crashes into the sleepy Route 66 town of Radiator Springs, destroying the main street. Sentenced to community service, the hotshot gets to know the town's offbeat characters and learns that there's pleasure in the journey, not just getting there. Also with the voices of Paul Newman, Bonnie Hunt, Cheech Marin and Larry the Cable Guy. Directed by John Lasseter & Joe Ranft. [1:56]

SEX/NUDITY 2 - A car kisses another car on the cheek.
► A male and female car flirt and drive together. Two female cars flirt with a male car and swoon over him in a couple of scenes. A male car flirts with a female car and asks her out to dinner.
► A male car lifts up its chassis as if to flash its privates at a female car. A male car admires a pin-striping tattoo on a female car's bumper. A car wife admires her car husband's new paint job.
► A character talks about two cars "getting cozy." A car says, "I wanna get a look at that sexy hot rod." A car sings a children's song about two cars "kissing." A car talks about being able to see another car's "dirty under carriage."

VIOLENCE/GORE 3 - A field cutter with whirring blades, glowing red eyes and smoke billowing from its exhaust chases a truck and a car through fields (they are unharmed but they have a couple of close calls).
► A car drives off a road, breaks through barbed wire, crashes into a statue, wraps it up in the wire and drags it, the statue is caught in telephone cables, it is flung back, and the car hangs upside down from the cables and we see that a road has been completely torn up.
► A car bumps into another car during a race, it then bumps another car causing it to blow a tire, another car runs into a wall, another spins out onto grass, and another one is knocked off the road (we see this car completely crumpled).
► Cars race along a speedway, one car skids off the side of the track, another is pushed against a wall, several others crash and spin out, one flips, another one flips and lands on the roof of another, and one jumps over the others (we see several cars crumpled up after the crashes).
► Cars throw things at another car on a stage. A car has a nightmare about a field cutter chopping up cars. A car races off a road, down a hill and into a cactus patch. A stampede of tractors charges into a town (no one is injured).
► A truck begins to fall asleep while driving, it swerves onto the shoulder, the back hatch of the truck opens, a car (which is asleep inside) rolls out and onto the road and it is nearly hit by oncoming traffic.
► A car speeds toward a railroad track as a train approaches and manages to cross just before the train. A car speeds along a road and is chased by a police car, the police car backfires and the other car thinks he is being shot at. A car blows a tire during a race, sparks fly from the rim, another tire blows and the car is forced to stop.
► A truck drives recklessly in reverse and spins around (no damage). A car and a truck go "tractor tipping," where they sneak up on sleeping tractors, honk their horns and the tractors tip over from being startled (they also make a flatulent noise when they hit the ground).
► There is a reference to a car product called "Rust-eze" and it is referred to as a medicated bumper ointment. A car has many bugs stuck to its grill. A truck snorts and gets ready to spit on a car. A truck flatulates.
► Two pit crews argue.

SUBSTANCE USE - There are comments made about a VW minibus having done drugs in its youth, which apparently caused some brain damage.

MESSAGE - Happiness cannot be bought, and fame is hollow. There's a lot more to racing than winning. 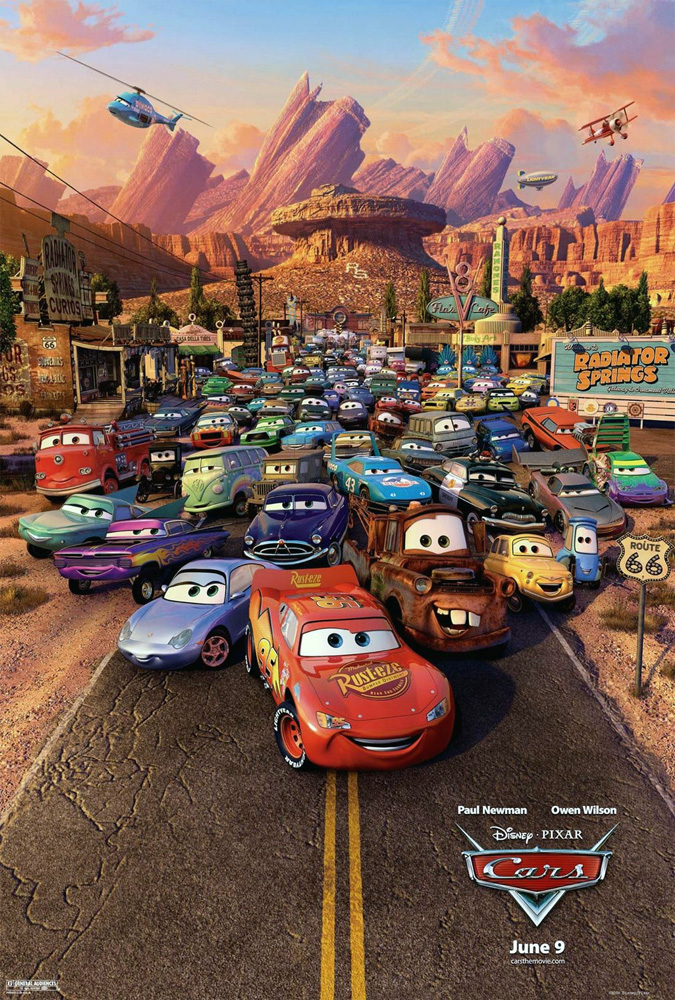