An 11-year-old boy who's bullied and lonely meets his new neighbor, who is also shunned by the other students because she is new to town. In order to escape the drudgery of their everyday lives they create the imaginary world of Terabithia in the woods near their homes, where the trees become giant trolls and the squirrels the minions of a dark master. With AnnaSophia Robb, Josh Hutcherson, Zooey Deschanel, Lauren Clinton and Bailee Madison. Directed by Gabor Csupo. [1:36]

VIOLENCE/GORE 4 - Large tree trunks and roots pop out of the ground and morph into giant troll feet that begin to chase a boy and a girl through thick woods; a dog barks and charges the troll feet, nuzzles in between the toes causing the troll to laugh, and the dog pulls out green moss (which is referred to as troll toe jam).
► Large sharp-toothed creatures (they look like wild dogs) surround a boy and a girl, and they lunge at them: the boy and the girl fight them off with sticks, a dog bites the tail of one creature, and the boy imagines having an iron glove on his hand and punches two of the creatures that are thrown into a tree.
► A boy punches another boy hard in the face (the boy is thrown back into a set of shelves).
► A boy and a girl are chased through woods by flying creatures (they look like crows), against whom they throw "grenades" knocking them out of the sky; but other creatures pick up the chase, and one lifts the girl off the ground, whereupon the boy grabs her legs and they manage to make the creature crash into a tree (the boy and the girl are unharmed).
► A boy falls out of a tree and is caught by a giant troll, just before hitting the ground. A large tree tips into a tree fort where a boy and a girl are, it cuts through a canvas tarp, and they imagine that the event was caused by a giant troll.
► A boy imagines being chased by a creature (we see mostly moving shadows) through thick woods, and he trips, so he covers his head in fear (he's OK). A boy sees a dark, shadowy figure moving close to him through a forest and he is frightened.
► Dragonfly warriors, with swords and bows and arrows, swarm creatures (they look like wild dogs) that are trying to attack a boy and a girl, and the creatures retreat.
► Pine cones drop into a tree fort where a boy and girl are, and they imagine being attacked by creatures with large teeth (they look like wild dogs), and one lunges at the boy but the boy punches it away.
► A boy and a girl find a huge troll track in the woods. A little girl stumbles on a fallen tree and nearly falls into a creek. A boy shoves his little sister and she falls on the ground.
► Children tease a boy on a school bus and one throws a piece of bread with peanut butter that sticks to his shirt. Two boys tease another boy about his sneakers, which have pink stripes and laces. Two boys shove another boy in the hallway and he falls on the floor; one of them has a bloody nose later and it is suggested that a girl punched him.
► A "dirt monster" swirls into the shape of a living thing, and then back into dust in a few scenes and it appears to be following a boy.
► A man yells at his son when he loses his keys. A young girl cries and asks her brother to beat up a girl who stole her Twinkie (he does not oblige her).
► We hear that a girl drowned and we see her parents and friends grieving. We hear that a girl is being physically abused by her father. A young girl talks about the Bible being scary with the "nails through the hands and eternal damnation." A girl talks about people who are prisoners of a "dark master" and that they need to rescue them. A girl talks about "TV killing your brain cells." A boy runs in the rain and becomes drenched. A boy says, "I'd trade all of my sisters for a good dog."
► We see drawings of winged creatures with many sharp teeth and weapons (swords, arrows, and knives).
► A boy is startled by the rustling of animals in a thick forest as he walks through trying to find his friend. A school bus driver makes a boy walk home after he is blamed for tripping a girl on the bus.
► A girl and a boy swing on a tree rope several times over a stream and land in thick shrubs on the other side. An animal is caught in a trap and a boy releases it in the woods (his father wanted to kill the animal).
► Several children chant "free the pee" while marching toward a bully who makes them pay to use the bathroom. A girl has ketchup stains on her face from another girl who squirted her.

DISCUSSION TOPICS - Death of a friend, death of a child, being an outsider, being poor, being the new kid in school, imagination, creativity, friendship, child abuse, bullies, death of a husband, grief, guilt, sorrow, dreams, hand-me-downs.

MESSAGE - You are who you are, not who your parents are.

(Note: The film includes a development which may be disturbing to some children and adults. Since it is a plot spoiler, you can read it by highlighting the following text: At the end of the film we learn that one of the main child characters has died.) 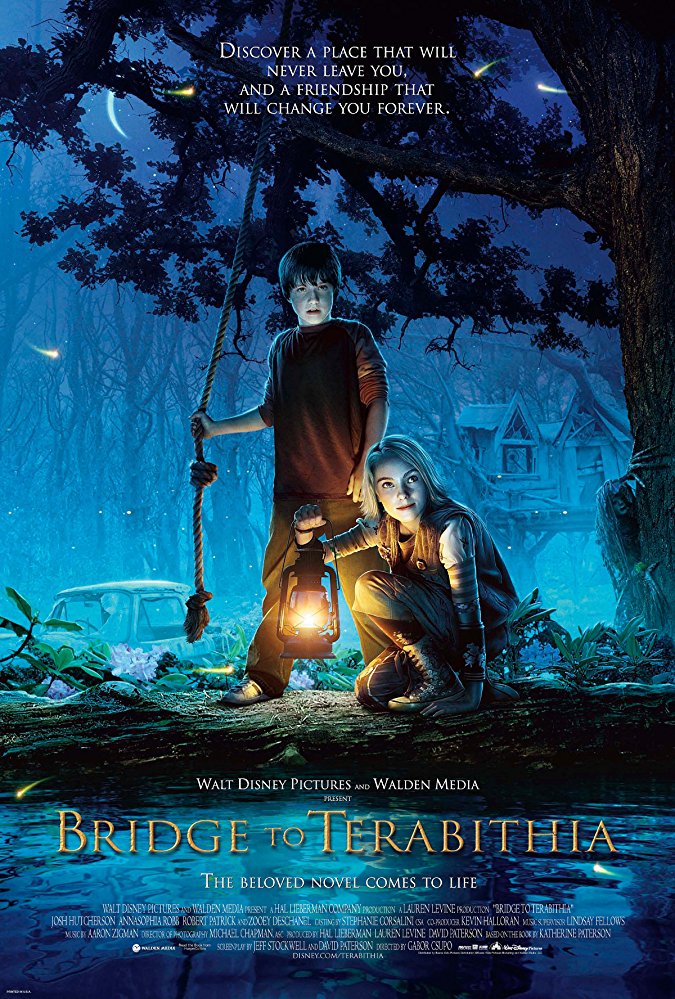