Satiric mockumentary about Borat Sagdiyev, a character created by Sasha Baron Cohen for his TV program "Da Ali G Show." Cohen also stars as Borat, a fictional Kazakh journalist who travels to the U.S.A. in order to study the American people and culture. Placing himself in real situations, and behaving as an unapologetic bigot, he often elicits anti-Semitic, racist and misogynistic responses from many people. Also with Kenneth Davitian, Luenell and Pat Haggerty. Directed by Larry Charles. [1:22]

SEX/NUDITY 9 - A nude man (we see his bare chest, abdomen and legs, while rolls of skin hide his genitals) masturbates while looking at a magazine with photos of women in swimwear; another man jumps on him, they wrestle, one man grabs the other's genitals and squeezes and also bites the other man's nipple, and one man straddles the other with his testicles in the man's face (we see one man's bare buttocks and testicles, while the other man's genitals are covered by a superimposed black bar).
► Two men touch each other's genitals (both are clothed) and they then wrestle while wearing only their underwear; we are told that one man takes a shower and another washes him (one man asks why another man tried to put a rubber fist in his anus).
► A man masturbates while looking at mannequins dressed in lingerie in a store window (we see his hand in his pants moving rhythmically and people are alarmed as they walk by). A man slaps cologne on another man's genitals (we do not see any flesh).
► We see a very short segment (no details are shown) of a video that we are told shows a woman performing oral sex on her husband (they are both celebrities). A man drives along a road where women proposition him.
► We see photographs of a young man with his genitals clearly visible and another man identifies him as his son. We see a picture of a nude woman hanging on a wall (her bare breasts and bare buttock are visible). Two nude men run through a hotel, people in the hotel stare in shock, and the men run into a meeting room and onto a stage where they wrestle briefly. A man wearing mesh jockey shorts sits in a chair while another man blows his hair dry, and then the man points the blow dryer down his underwear in the front and back. A man wears a thong-type swimsuit that reveals bare buttocks. A man watches a TV show where actresses wear tight-fitting swimsuits (cleavage and part of bare buttocks are exposed). A woman wears a low-cut top that reveals cleavage.
► A man tells a crude story about his sister teasing his brother (that he will never have sex while she exposes herself to him) and that the brother breaks out of "his cage and gets it." A man says, "I like sex." A man introduces another man as the "town rapist" and later makes a comment about him raping animals. A man tells a woman that he would like to pay her for sex (they do not have sex). A woman joins a man at a dinner party and it is suggested that she is a prostitute. A man tells a woman that he has just met that she has an erotic physique. A man talks about wanting to ejaculate on a woman's stomach. A man passes a woman on the street, he makes suggestive noises and asks her "how much." A man asks about having "sexy time" with women. Using crude terms, a man asks a car salesman for a car that will attract women. A man is shocked when another man tells him that women can choose with whom they have sex.
► A man kisses a woman whom he describes as his sister, and says that she is a prostitute. A man kisses many men on the cheeks as a greeting. A man tries to kiss a man as a greeting, and the man becomes upset and yells at him.


VIOLENCE/GORE 5 - We see a bear's severed head in a refrigerator (a small amount of blood is visible on the fur).
► A man lunges toward a woman, covers her with a cloth sack, knocks her to the ground and struggles to keep her from getting away (it is supposedly a marriage proposal); she does get away and runs, and security guards tackle the man in a parking lot and hold him to the ground.
► A man talks about killing homosexuals and Muslims, or anyone who looks like a Muslim. A man blames 9/11 on "the Jews." Two men are shocked when they discover their hosts in a bed and breakfast are Jewish and they fear that they will be murdered in the night (they say, "You can barely see their horns.").
► People line a street to watch the "running of the Jews": we see two people wearing very large plaster heads with horns running along a street, while other people run in front of and behind them yelling; one of the people wearing a plaster head stops and drops a large egg on the ground, whereupon children rush and crush it.
► A man and a woman are asked to leave a dinner party (presumably because the woman is an African-American prostitute) and are told that the police have been called.
► A man buys a black bear, chains it to the back of the ice cream truck he is driving, and the bear growls loudly at children who approach the truck, and the children run away screaming. A horse rears, the rider falls off and the horse falls on top of him (we do not hear anything about the rider's injuries).
► Two men shove each other. A man tries to say hello and introduce himself to people on a street, they yell at him, and threaten him and they run away. People become angry and yell at a man singing an anthem about his own country. A wife threatens to snap off her husband's genitals if he is unfaithful. A man driving a car yells out the car window at another driver who honks at him. A man tries to kiss a man as a greeting, and the man becomes upset and yells at him.
► A man defecates in shrubs along a busy street (we see part of his bare thigh and people walk by and are alarmed). We see bear feces smeared on the back of a truck. A man washes his face in a lake right next to where another man is urinating. A man washes his face in toilet water. A man tells his host that he needs to use the bathroom and returns with a plastic bag filled, presumably, with feces (the host is alarmed and she takes him back to the bathroom in order to dispose of the bag properly).
► Children in a dilapidated building are introduced as being in pre-school and they are holding guns. A man is introduced as being an "abortionist." We hear that a woman was killed by a bear and her husband celebrates.
► A chicken runs through a subway train car and frightens passengers. A man throws a bag down and we hear a chicken cluck from inside the bag. A man stumbles and falls several times breaking many fragile items in an antique store.
► We see people thrashing on the floor during an Evangelical Christian church service. A man is tied to a large cross and poked with a reed rake repeatedly (symbolizing a crucifixion).

MESSAGE - Cultural differences can be extreme. Many people won't admit it, but they are bigots. 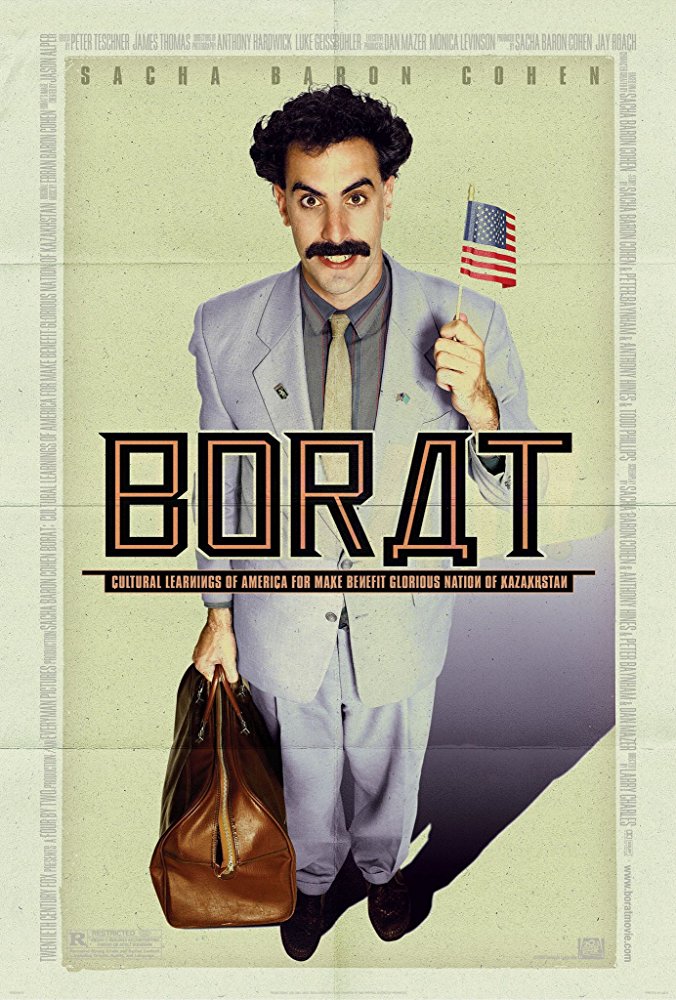