Broad farce adapted from Dave Barry's best-selling novel and starring Tim Allen and Rene Russo. By way of plot, two hit men are hired to kill a man because he's been embezzling money from his employers. Through many twists and turns, a suitcase with a bomb, the hit men, a divorced dad, an unhappy housewife, the embezzler, two ex-cons out for some quick money, some Russian weapons dealers, the FBI, two lovestruck teens, and a psychedelic toad, all cross paths. Also with Omar Epps, Dennis Farina, Janeane Garofalo, Jason Lee, Tom Sizemore and Stanley Tucci. [1:33]

SEX/NUDITY 5 - A man and woman kiss passionately, grab each other, groan, begin taking off their clothing, fall back across a desk and land on the floor before they are interrupted. A man tries to force himself on a woman and in the process massages her feet, licks her toes and puts her foot in his mouth while he moans. A woman asks a man if he wants to have sex with her. A man and woman kiss romantically. A completely nude man runs through an airport; we see everything but his private parts. A man dances at a strip club wearing a g-string and wiggling his hips. A woman undresses and we see her in a slip that exposes some cleavage, a woman is shown in a night shirt that exposes some cleavage and part of her thigh, we see a woman wearing a red lace bustier under her police uniform, and a woman wears a low-cut halter and a mini-skirt that reveals some cleavage and thigh. There are several shots of a TV broadcasting a woman doing aerobics with different camera angles of her body in a tight-fitting leotard. We see a woman in a photograph with very large breasts and cleavage. A man watches and admires a woman from a distance, and a young man admires a young woman's breasts and buttocks several times. A dog repeatedly sniffs people's crotches. There is some sexual innuendo: a young man describes a scene where he falls on top of a young woman and her mother falls on top of him, a man asks a couple if there's room for a third, a young woman asks a young man "is that a water pistol in your pocket or are you just glad to see me," a man refers to a "strip search" at an airport security check point.

VIOLENCE/GORE 5 - A man is shot in the foot and he falls to the ground moaning. A man falls out of a plane while it is flying, dangles from stairs (while the plane is surrounded by fighter jets), lets go and falls into water below where there's a huge explosion and plume (he was carrying a suitcase with a bomb inside). A man punches another man who falls off a barstool and lands on the floor, and then he is kicked. A man is hit with a bat, a man is hit with a bottle, a woman hits a man on the head with a crucifix, and a man is hit in the head with a fire extinguisher. A man is hit on the head with a gun; the gun fires and shoots a TV. Two men with stockings on their heads tie a group of people up with telephone cords, fire a gun and the bullet hits a TV. A man blows cigar smoke in a man's face and the other man breaks his fingers. Three young people are shot at as they run away, and an airport window is shot out. A man breaks a man's car window and drags him out through the opening, and a man slams a police officer into a cement pole. A man jumps out of a tree, lands on a man and takes his rifle. Police officers throw a young man on the hood of their car (he had a gun in his hand). There are several instances of threatening with guns: A group of people are held at gunpoint by two police officers, two police officers are held at gunpoint, a man holds three people at gunpoint, two men hold a group of men at gunpoint, two men threaten a man with a gun and talk about shooting him in the forehead, a man and young woman are threatened with a gun, a man holds a water pistol to a man's head, and a man threatens two pilots with a gun and fires the gun in the airplane. Two women scream and tackle a young man who they think is trying to shoot them (he's carrying a water gun), a young woman jumps on a man's back and he's knocked out when he hits the floor, a man knees another man in the stomach, a man knees another man in the groin, and a man is sprayed with chemical from a fire extinguisher. A man kicks a computer screen and the glass breaks and sparks shoot out. A comment is made about shooting a plane down. A man chases and jumps onto a taxiing airplane, a car is driven through a fence, a large book case is shoved through a sliding glass door, a car is driven recklessly causing other cars to crash into each other, and a car crashes into highway barrels. A gun is fired and the bullet hits a TV that explodes. A suitcase with a bomb in it is carried around. A goat is hit by a car, tossed in the air over the car and lands on its feet unharmed. There are several verbal threats. Two men talk about pelicans being trained to drop bombs. A young man asks his father if he can use the car because he and a friend "need to kill a girl." Two men are hired to kill a man. A man falls and drops a rifle out of a golf bag. A woman runs into a tree and knocks herself out. A frog spits on a dog and a man; both start hallucinating. Young men and women play a game called "killer" which involves squirting each other with water guns when they least expect it. A goat urinates.

MESSAGE - Life is hard but it can be easier if you go through it with a partner. 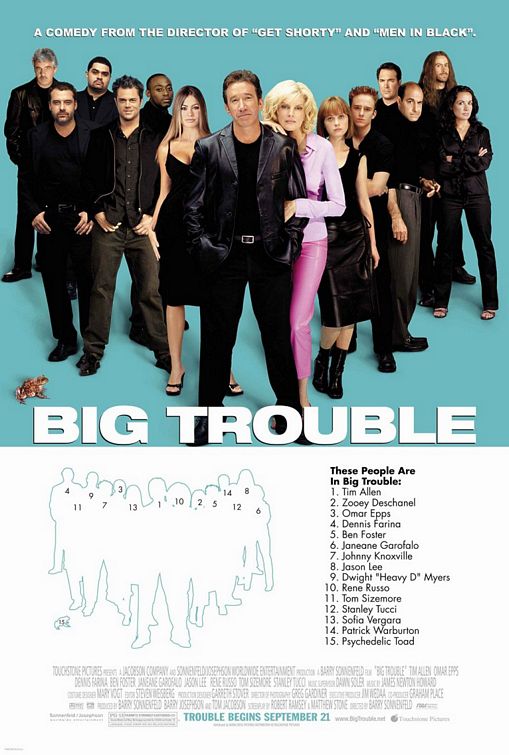