It's 1864 and a preteen girl takes an injured Union soldier (Colin Farrell) to her Southern all-female boarding school. As sexual tensions rise, girls and two women offer him companionship as they belittle one another and tempers flare. Also with Nicole Kidman, Kirsten Dunst, Elle Fanning, Oona Laurence and Angourie Rice. Directed by Sofia Coppola. A few lines of dialogue are spoken in French with no subtitles or English translations. [1:34]

SEX/NUDITY 6 - A woman runs from a dinner table and enters the room of a man where she blocks the closed door with a table and tries to kiss him; he grabs her head and falls on top of her on the floor, he rips her bodice (we see cleavage in an under-bodice), he pulls up her long skirt (we see one bare thigh) and he reaches toward his groin, grunts and thrusts several times as she grimaces and the scene ends. We see a man's hand rubbing a teen girl's bare thigh as the couple writhes together; a woman sees them, shouts in surprise and backs onto a stair landing (please see the Violence/Gore category for more details).
► A man tells a woman that she is beautiful and then says, "I love you" before hugging and kissing her (she rushes out of the room). A man stands close to a 16-year-old at a parlor music recital and smiles as she giggles; she goes to his room later that night, kisses him twice as he sleeps, he awakens, and she leaves. A man and a woman almost kiss, but do not do so. A man stumbles with a cane, falls into a woman's arms, and then stands and a young girl helps him walk away.
► A man asks a woman if he can come to her room that night (sex is implied) and she agrees; she puts on a sleeveless long nightgown (we see her breasts bounce slightly in the gown) but the man does not go to her room.
► Five girls ages 10 to 16, a woman in her 30s and a woman in her 40s all giggle at a man staying in their seminary for girls; the girls and younger woman giggle at him at three dinners and each girl and both women visit in his room, giggling and smiling as he smiles. A man flirts with a woman as they smile discreetly at a dinner table and while she looks out of a window at him in the garden.
► A man tells a woman that he wants to stay with her because he is attracted to her. A man tells a 12-year old girl that she is his best friend. A young girl says that Yankees harm and molest any women they find; a older woman tells her to stop that nonsense. A woman admits to a man that she had a boyfriend before the Civil War, but not now.
► A woman gives a man a sponge bath, stopping to take a deep breath twice when she gets close to his groin, which is covered by a small table cloth; she uses a cloth to wipe his chest and abdomen (we see a close-up of one of his thighs being wiped) and when she leaves the room, she breathes deeply for a few moments to calm herself.
► A woman wears a slightly off-the-shoulder dress at a dinner and another woman forces her to cover her shoulders with a shawl. A preteen girl laces another preteen girl into a tight corset; there's no nudity.

VIOLENCE/GORE 6 - A woman and a man argue and struggle on a stair landing (please see the Sex/Nudity category for more details) and she pushes him down a long flight of stairs; he tumbles and lands on the lower floor unconscious and stitches in a leg wound break open and blood pours as we see the splintered ends of bones.
► A man awakens to find his leg is a bandaged thigh and stump where his knee used to be and he screams and bellows; we hear him slamming furniture and breaking pottery as the screams last for several seconds and when a teen girl enters his room, he grabs her roughly by the hair and demands a key to a desk containing a gun. A man pushes a woman away roughly. A man chases a 12-year-old girl who yelps and runs away. A man fidgets with his collar as if he is hot, gasps, grunts, clears his throat, gags, stands, shudders, croaks, "Help me," grunts some more and falls to the floor dead with his eyes open; the camera cuts to girls sewing the man into a muslin bag.
► A man crashes into a kitchen on crutches and finds women and girls sitting; they scream as he brandishes a gun, drinks (please see the Substance Use category for more details) and shoots down a chandelier (we hear and see glass break as the chandelier crashes loudly to the floor); he shouts and bullies the women and girls and says that he will shoot each one of them if they do not do what he says from now on. A woman locks a wounded man in a room, but girls keep unlocking the room; the woman speaks sternly to the girls and roughly pushes one out of the hallway and upstairs.
► A woman cuts away a man's trouser leg to reveal a large, open wound and some bullet holes around it; with scissors, she picks out several pieces of ball-shot covered with blood and she uses a curved rug needle and thread like string to sew up the wound (we see her bloody hands) and she makes several stitches that we see (we see blood on bandages in subsequent scenes).
► A preteen girl is surprised by a wounded soldier in a wooded area; she helps him walk to her boarding school (he limps, gasping) where other girls and two women lift the man into the house and onto a chaise. We hear cannon fire off-screen in several scenes. We hear cannon fire and see streams of smoke rising above trees on the horizon in one scene.
► Two women and five girls place an injured and unconscious man on a dining room table (one woman's night gown is covered in blood) and a woman shouts at the others to get themselves together and bring her chloroform and the saw from the smokehouse; she says that she cannot save the leg and the man will bleed to death if she does not remove it at the knee.
► A dinner bell is used for emergencies and when it rings in one scene, a troop of soldiers march up with prisoners in tow; the captain gives a woman a box of bullets and she locks it, and a pistol, up in a desk in her house.
► A young girl in a group of five girls suggests that a preteen girl gather poison mushrooms and feed them to a man who is holding them hostage; two women agree and the older woman says, "We'll invite him for a big sendoff." A man shouts, "I'd rather be dead than be a man without leg! I'm not even a man anymore. You butchered me!" Women and girls snap at each other in jealousy. A man says that a woman butchered him because he would not come to her room at night. A young girl brings a man a prayer book "in case you're on the edge of death." A man holds the hand of a woman and she leaves the room, gasping and shaking. A preteen girl says soldiers could shoot a wounded man and leave him along the road to die. In another room, a woman with a pistol says, "There is nothing more frightening than the sight of a woman with a gun." A teen girl says, "He told me he'd kill me if I made any noise."
► A man sharpens a hatchet in close-up on a grinding stone and chops limbs off a tree.
► Several girls and women stand outside with one holding a Bible and they shovel dirt into a hole, likely burying a man's leg.

SUBSTANCE USE - A woman and a man drink small glasses of brandy together in two scenes, a girl pours wine for a man at dinner and he drinks it, a man pours wine for a woman and she drinks it, a man chugs a partial bottle of bourbon and smashes the bottle on the floor loudly, three bottles of bourbon are seen on a shelf untouched, a woman pours bourbon over a wounded leg as antiseptic and dabs on some non-beverage alcohol later.

MESSAGE - One's kindness can be interpreted as weakness by an opportunist. 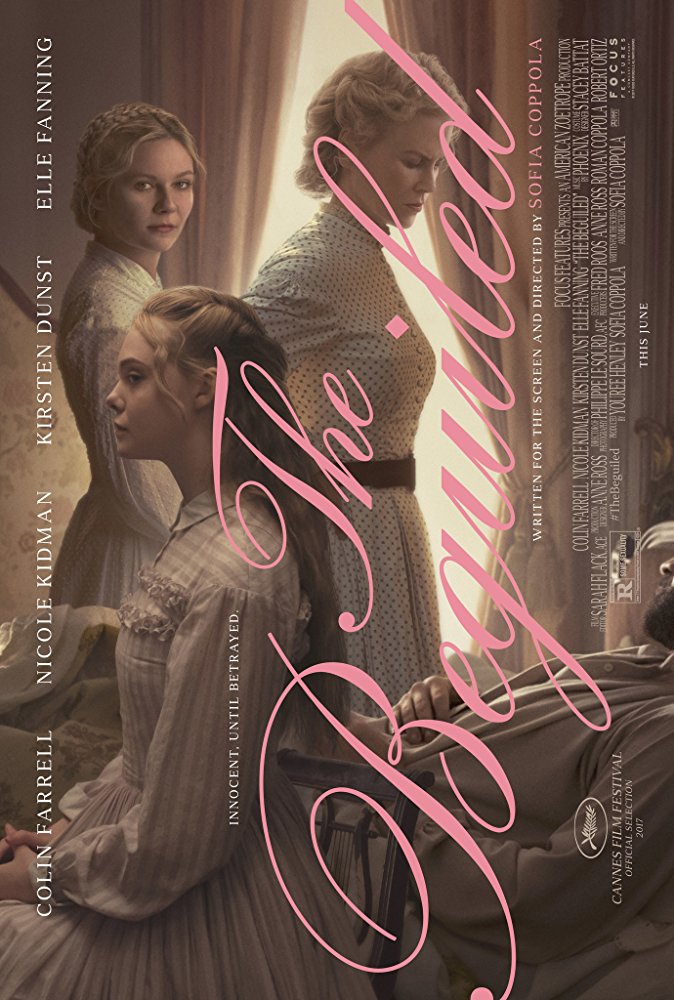