Two American brothers are given the task of taking their grandfather's ashes to Germany and sprinkling them in his homeland, and they are surprised to uncover family secrets that involve a secret underground beer competition. Receiving a humiliating reception from their German cousins, they return stateside, determined to train and return to Germany in order to win " Beerfest." With Paul Soter, Erik Stolhanske, Steve Lemme, Kevin Heffernan and Jay Chandrasekhar. Directed by Chandrasekhar. [1:40]

SEX/NUDITY 9 - A man and a woman flirt and make suggestive remarks to each other; they are then shown kissing, they take off each other's underwear (we see his bare-chest, and her bare abdomen and legs), the woman moans and thrusts (we see her bare breasts) while the bed shakes, she puts whipped cream on the man and licks it off, puts a plastic bag over the man's head and squirts mustard on him, and finally the man sucks the woman's toes and fingers.
► A man and a woman have sex in a barn: we see the woman's dress, down to her midriff, revealing her bare breasts, and we see his bare chest to the hip as they thrust and moan rhythmically.
► A man and a woman have sex: he thrusts from behind her (we see her bare breasts and his bare chest) and they both exclaim. A man and a woman kiss with open mouths and tongues protruding.
► Two women unzip their tops and reveal their bare breasts. Several women wear tops made of strands of fabric that appear sheer and reveal their bare breasts. Several people fall down in a large crowd pulling down the dresses of several women and exposing their bare breasts.
► Several women in skimpy lingerie pose in windows along a street in Amsterdam as men walk along and admire them. Several women wear Oktoberfest dresses that are low-cut and reveal cleavage and bare shoulders. A man bends over and his pants sip down revealing his buttock cleavage. A nude man wakes up in a forest (we see his bare buttocks, back and legs) (please see the Violence/Gore category for more details).
► Several people in a laboratory stimulate frogs until they reach ejaculation in order to use the genetic material for cloning (we see them rubbing the frogs and hear rhythmic croaking). In another scene, a man stimulates a frog until it reaches ejaculation, and we hear croaking and see green goo spurt onto the man's face.
► A man with plastic male genitals strapped around his waist approaches a man, and tries to kiss him and caresses his buttocks. A man, who appears to be a male prostitute, approaches a car with four men inside and offers them many different types of sex for money. A man unzips his pants and prepares to pull out his genitals but is stopped before doing so.
► A woman massages, rubs and slaps a sausage to warm it up and several men who are watching her suspect that there is a sexual technique being employed. A man pretends to be having sex with a male doll (he thrusts his hips toward it) and licks its face.
► Two women nearly kiss, and a man caresses another man's cheek tenderly. Men admire women wearing revealing tops.
► We are told that a man had sex with another man's girlfriend and also that another man participated as well. One man tells another man that he had sex with the man's wife, before he married her, while he was dating her, and his comments are very insulting toward her. A woman offers to put a sausage in her mouth to demonstrate how to relax the throat muscles. A man makes crude sexual remarks to a woman in a bar. A man wears a T-shirt that reads: "Girl ferrets are sleazy." A man tells a sexually explicit joke.

VIOLENCE/GORE 6 - A man and a woman fight: they punch and kick each other, the woman sits on top of the man, pounds on his genitals, and then pounds on his head, while the man hits the woman with a heavy wrench, pounds her head into a pole and kicks her repeatedly; then the man is pushed into a vat of beer, is pulled under and drowns (we see him floating motionless later).
► A nude man wakes up in a forest next to a dead deer (it has a gaping bloody wound on its throat and the man has a bloody mouth).
► Two men take a woman away, she protests, we hear two gunshots and we are told that she is dead. A man is taken away by two men and we hear two gunshots (we are told that he was killed).
► In a couple of scenes we see men walking through a dark warehouse where strange activities are taking place: a woman turns the crank of a meat grinder with a human foot sticking out of the top, a boy rides a tricycle around a man holding a dog on a leash, another person in heavy shadow appears to be torturing another person (it looks like he's branding him, but it's not clear).
► A man lunges toward and punches another man in a few scenes. A man punches two men in the face (we see one man's bruised eye afterward). A man punches a man in the eye. A woman slaps four men in the face, one falls down, breaks open a coffin, and the body in the coffin falls on the man and pins him to the floor. A man slaps a man in the face, and a woman hits a man with a cane.
► A man chews on a broken glass and we see his mouth begin to bleed. A large serving dish filled with hot cheese soup is spilled and pours on a man who screams and spins around. Beer is forced through a man's nostrils and mouth by tubes, as punishment. A keg of beer falls from a high perch and crashes into a boy on a stage (there is no blood but he is knocked on the ground).
► The spout for a large keg of beer is opened and sprays two women, soaking them and pushing them back. Several people fall backward knocking into other people and pulling down several women's dresses. A man dumps the ashes of a man on two other men. A man falls hard on the floor after jumping from a ledge. A man in a hospital bed guzzles several beers, burps loudly, pulls a cord, and dies.
► A man says that he cloned monkey-frogs, and a man prepares to destroy them by placing them in a dumpster, squirting lighter fluid on them and presumably burning them (we do not see them burning). A man holds another man's head against a table and presses against it while another man threatens him. Several men threaten two men.
► Several people participate in a hot dog eating competition, shoving many hot dogs in their mouths. A woman talks about men drinking the urine of a ram to make them tough and we see men drinking a yellow liquid that we are told is urine. A man urinates in another man's shoe (he is asked to do so). Several men urinate in urinals (we hear loud trickling), and one is pulled away before finishing and a stream of urine sprays in the air. A man urinates in a urinal (we hear the trickle). A man talks about making fudgesicles out of dog feces and watching a relative eat one.
► A man knocks the head of a doll off. Two men are pelted by cabbage thrown by an audience after they lose a beer drinking competition. We see two people running after having been "tarred and feathered." A man becomes angry and the image of the Star of David appears in his eye. People grieve at funerals in a couple of scenes. A large barrel rolls into a room and several men come out of it.
► A man talks about having been beaten and having a ping pong paddle forced into his anus. We hear that a man's wife left him and took their children. There are a few vague references to animosity between Germans and Jews. We are told that a man's ashes are contained in an urn. People talk about a person having their stomach stapled for weight loss purposes. A man talks about a man who never chews his food, and says that he once passed a whole plum.
► Many men drink beer and guzzle beer and then burp loudly. A man burps very loudly and blows air through a room.

MESSAGE - Good beer is worth fighting for. 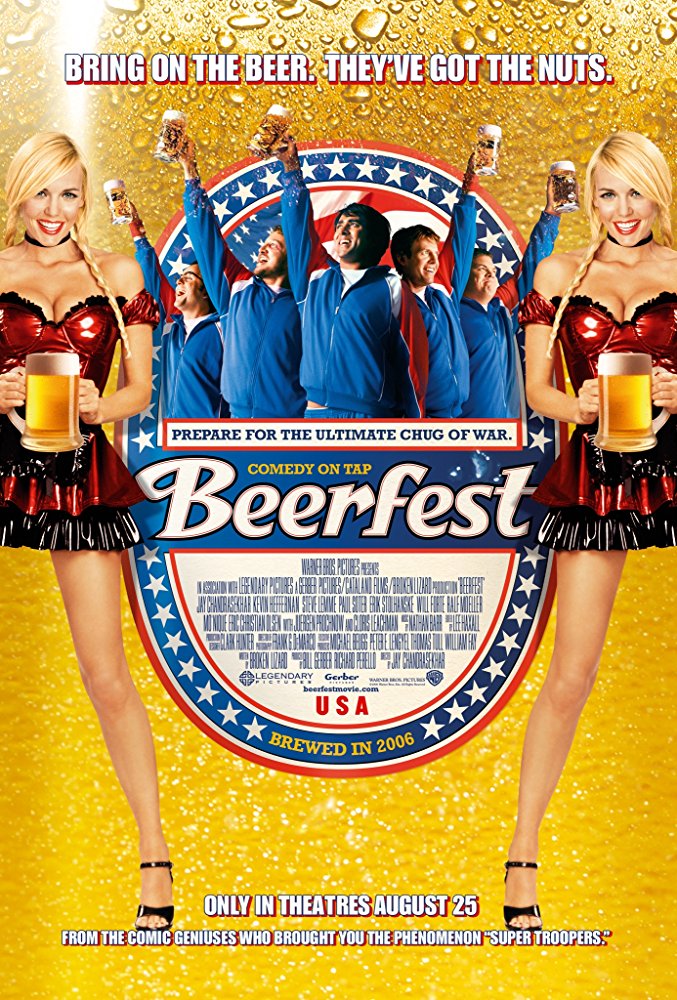