Calvin (Ice Cube), his friends, family and co-workers are back at his barbershop, and this time around he's married and has a young baby. He also has a business decision to make: A large hair care salon looms across the street from his more modest tonsorial establishment, and urban developers want to replace small stores with name-brand chains. Should he give into progress and sell, or should he hold onto what's left of the community his father helped build? Also with Cedric the Entertainer, Garcelle Beauvais and Queen Latifah. Directed by Kevin Rodney Sullivan. [1:56]

SEX/NUDITY 4 - A man and a woman kiss, he pushes her back onto a sink, and they continue to kiss until they are interrupted by someone coming into the room. A man and a woman kiss passionately, and a man and a woman kiss. A woman is in a bed partly covered by a sheet (we see her bare shoulders and legs) and is waiting for a man (he's bare-chested). A woman wears a short slinky nightie and her husband says, "you're trying to start something." A young man and a young woman dance together swaying and thrusting. A woman confronts a man about his having had sex with another woman. Women in a salon talk about the men they'd like to have for a sexual relationship, one woman makes a sexual gesture with her curling iron and makes a sexual remark about a man's stature. A woman wears a low-cut dress that reveals cleavage and a man admires her, a woman wears a short skirt that reveals her bare thighs, and a woman wears a low-cut top that reveals cleavage. Men grab their crotches in several scenes and a woman mimics a man by grabbing her own crotch. A man hangs up photos of women in bikinis and remarks about their buttocks being his motivation. A man makes a remark about a man having "oral relations" with a woman. A woman tells a man, "the last woman you had was battery operated." We hear the song lyrics "in my bedroom all alone." There are a few references to men taking Viagra, one man talks about "getting it out of the ballpark."

VIOLENCE/GORE 4 - We see people being chased and beaten by police with nightsticks, and a man throws a fire bomb into a store and there is a huge explosion. We hear about Martin Luther King having been murdered. A man grabs a young man by the throat and yells at him (the young man shaved a bald patch on the man's head). Two men fight: they yell at and insult each other. A man, being chased by the police, runs into another man knocking them both down, they both get up and the one continues running, goes into a barbershop and holds two men inside at gunpoint (it's actually his hand in his coat pocket). A woman yells at a man, throws a bag of clothing at him and hits him in the face. A man yells at a girl, a woman yells at a man, the man and the woman exchange insults, and the woman threatens the man. A man and a woman argue and yell at each other. Women practice karate moves and yell about men with each thrust and jab. A man chases a woman: she is on a subway that pulls away from the platform, he charges through the station, onto the street, jumps onto a speeding fire truck, jumps off and runs along the street and into another station. A man talks about being lactose intolerant and what happens to his abdomen, backside and the odors of the flatulence.

SUBSTANCE USE - People are shown smoking and drinking alcohol.

MESSAGE - Change and progress are good, as long as they do not destroy communities. 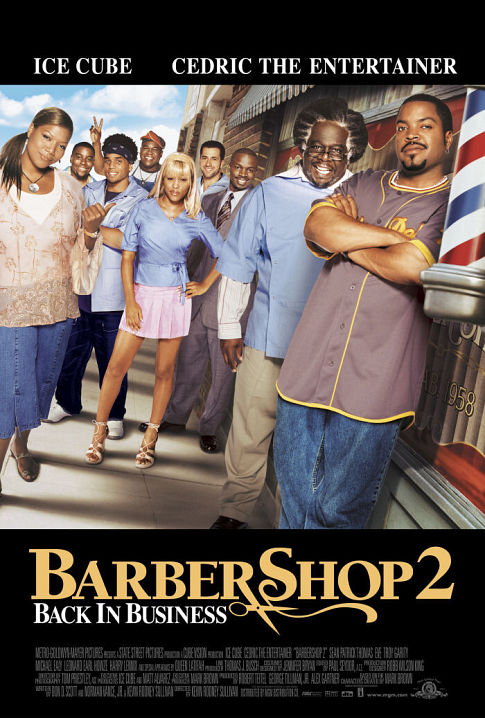