A police detective (Nicolas Cage) serving in post-Katrina New Orleans becomes addicted to prescription pain medication after being injured in the line of duty, and quickly starts using street drugs. As he investigates the murder of a family of Senegalese immigrants, he's compromised by his addictions to drugs and gambling, and his criminal associations. Also with Eva Mendes, Val Kilmer, Brad Dourif and Xzibit. Directed by Werner Herzog. [2:01]

SEX/NUDITY 8 - A woman unzips a man's pants and they begin to have active, thrusting intercourse as she stands in front of him in a parking lot, and another man watches (the woman's bare buttocks are seen as the man lifts her skirt while asking her sexually explicit questions).
► A woman and man kiss passionately and the woman slides her body on top of the man as he lies in bed (sex is implied).
► A woman wearing revealing undergarments (a cleavage exposing bra) walks into a room where a man is lying on a bed, seductively places her foot on his crotch, straddles him and attempts to kiss him, but he falls asleep. A man wakes up a woman lying in bed and they begin to kiss passionately.
► Women are seen wearing low-cut, cleavage exposing dresses and tops. Women are seen in various states of undress, and undergarments visible. A man and a woman drive by various women dressed in suggestive outfits and making catcalls; they are presumably prostitutes. A dozen photos of a woman in suggestive poses in various stages of undress are seen.
► A man has a woman sit on his lap, makes crude comments about her being a prostitute and requires that she has intercourse with two other men; another man instructs her to clean herself up so that she can have sexual intercourse with the two men. A man angrily remarks that a man had broken his promise by not ensuring that a woman has sexual intercourse with two men. A woman is referred to as a "Pros," meaning prostitute. A man discusses with another man that a woman has a "client" coming and a man has a heated discussion with a man about a woman being a prostitute. A man jokes to another man that they will find nude photos of a man's wife, saying that he had met her at Hooters.
► A man and a woman kiss. A woman and a man hug. A man kisses a woman on the forehead. A young woman and a young man are seen stumbling out of a building, arms wrapped around one another, and the young man's hand caressing the woman's behind.

VIOLENCE/GORE 8 - The dead bodies of three adults and two children are seen, with gun shot wounds in various parts of their bodies and covered in blood. Photographs of a crime scene are seen with the bodies of three adults and two children, with gunshot wounds in various parts of their bodies, and covered in blood.
► A violent shoot-out results in three men being shot dead: their bullet-hole riddled, bloodied bodies are seen lying on the ground as another man insists that they continue to shoot at the dead bodies.
► As a man angrily questions two elderly women, he pulls the oxygen tube from one of the elderly women's noses and tells the other woman that she will be blamed if the woman dies from lack of oxygen; as the elderly woman gasps for air, he points a gun at them, says that he will shoot them if they do not comply, and remarks that he should shoot both of them.
► Two men grab what is presumably a dead body, wrapped in black garbage bags and strapped down with weights, and dump it into a canal.
► A man approaches the scene of a car accident, and an alligator is seen lying on the ground, its leg twitching as its entrails out of its stomach; an SUV is seen overturned in the distance.
► A man violently slams another man into a wall and steals $10,000 from him, saying that it was in payment for "being rough" with a prostitute during sex and causing the woman to have a black eye (we see the woman's black eye and she asks a man for a painkiller to dull the pain).
► Armed police officers rush to a home, a young woman holding a small child answers the door, one of the men tells the woman that she needs to cooperate or they might start shooting and her child might "accidentally" end up being shot; the woman steps aside and the men rush into the home. Many armed police officers rush into a room, one of them shouts that a man is going to be arrested, and one officer sends away most of the other officers, instructs another officer to handcuff the suspect, and argues about shooting the suspect and stealing his drugs. A man driving a car points a gun at the head of a passenger, screams and then laughs (the passenger laughs nervously). There are several loud arguments between groups of men, and a man pulls a gun and holds it to the head of a man on different occasions.
► A man points a gun to another man's head, causing him to drop his gun; he is then escorted out of a building, surrounded by armed police officers. Police officers are seen holding guns and carrying guns at various times. A man holds a gun and threatens to shoot another man unless he gives him drugs, and the man hands him a vial of cocaine and leaves.
► Two women scream at one another and wrestle over a bag, one of the women shouts that she is going to "cut" the other and the fight is broken up. A man slaps another man on the side of the head.
► During a heated argument, a man shows another man a gun that's tucked in his waistband. A man shouts at two people to turn around and face a wall as he rifles through their pockets and handbag. A woman jokingly holds a gun up to a man's chest.
► A man in a jail cell begs two men to save him as water floods the room: the two men joke about betting on when the man will die, and one of the men releases him (we understand that one man was injured).
► A woman watches a bullfight on television; a man is seen being tossed in the air, and his lifeless body falls to the ground.
► A teenage boy explains how he had heard shots being fired in a house, hid in a closet, and later came out and discovered the dead bodies of three adults and two children. A man tells a woman that a teenage boy was a witness to five homicides. A woman discusses a murder, asking a man to find justice for her dead family members. A man remarks that a teenage boy will possibly "end up dead." A man remarks that a man without a gun is not a man. A man shouts death threats at a group of men. A man angrily shouts at people. Police officers recite the list of charges a man had previously been convicted of, including rape, sodomy, possession of a deadly weapon, and possession of drugs.

SUBSTANCE USE - A man is seen snorting cocaine and heroin, smoking crack and marijuana, and taking prescription painkillers; a man is seen smoking crack with two other men, snorting cocaine and heroin with a woman, having a woman blow smoke from a crack pipe into his mouth, snorting cocaine while driving a car with a teenage boy sleeping in the passenger seat, and taking a drag from a joint of marijuana and offering it to another man; a man and a woman are seen snorting cocaine on multiple occasions and the man offers the woman cocaine multiple times; after finding an envelope of cocaine in a woman's purse, a woman pours cocaine onto the floor as two men and a woman watch, a man is seen purchasing drugs and is then accosted by the police who take the drugs and bribe him, four men are seen with a very large bag of uncut drugs, discussing potential profits and later one of the men begins to scoop drugs into a bag, a man who had been arrested for possession of drugs states that he only had "skinny little joints," a man discusses with various people that he is stealing drugs that have been brought into the police department, and people discuss drug dealers. A woman, referred to as a "booze hound" is seen in a drunken state and holding a beer multiple times, people are seen drinking in bars, in a casino, at restaurants and out of brown paper bags, a man discusses going to AA meetings, a woman says that she is going to an AA meeting with a man and is later said to be enrolled in rehab, and as part of a burial ritual a man takes a drink of alcohol and spits it over closed caskets lined up in a cemetery.

MESSAGE - Addictions will ruin a person's life and must be dealt with properly. 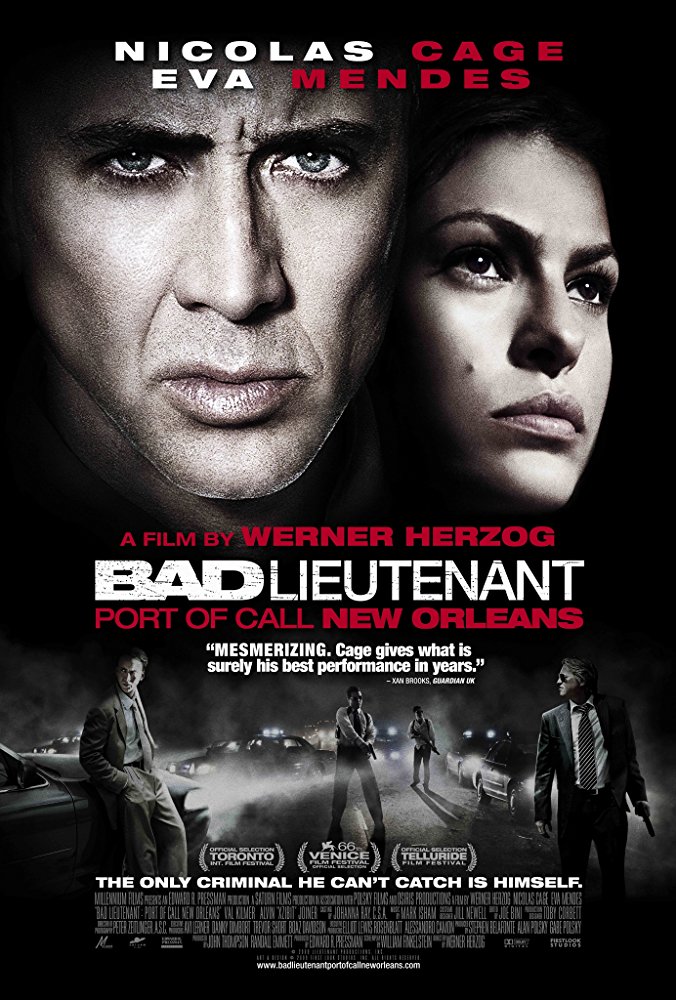