Why is “Army of the Dead” rated R? The MPAA rating has been assigned for “strong bloody violence, gore and language throughout, some sexual content and brief nudity/graphic nudity.” The Kids-In-Mind.com evaluation includes an implied oral sex scene and a scene of nudity, many scenes of death and destruction with a lot of blood and gore, and over 30 F-words and other strong language. Read our parents’ guide below for details on sexual content, violence & strong language. The founder of a mercenary strike force (Dave Bautista) travels to a quarantined Las Vegas with his team to fight zombies and steal cash from a defunct casino. While there, his daughter (Ella Purnell) and her friends join the fray. Also with Omari Hardwick, Ana de la Reguera, Theo Rossi, Matthias Schweighöfer, Nora Arnezeder, Hiroyuki Sanada, Tig Notaro and Garret Dillahunt. Directed by Zack Snyder. Several lines of dialogue are spoken in Spanish and French with English subtitles. [Running Time: 2:28]

Army of the Dead SEX/NUDITY 5

– Oral sex is implied when a woman is shown from the waist up wearing a bra that reveals some cleavage in a moving car; she unbuckles the male driver’s belt, leans over his lap, and he says, “Get in here” as he moans.
► A zombie man rubs faces with a zombie woman. A man touches a woman’s shoulder and she says, “Stay the [mild obscenity deleted] away from me.” A man asks a woman if she wants to touch his “handgun” and she takes the gun and shoots him in the leg. A man threatens to use a rectal thermometer on a woman, scaring her. A pianist imitates Liberace with flamboyant gestures.
► We see three topless female zombies for several seconds (bare breasts and nipples are shown). A man wears a leotard that is open across the chest, stomach, and navel. Several male zombies with pale skin are shirtless, revealing backs, abdomens, chests and shoulders. A man appears shirtless in four scenes (we see his bare chest, abdomen and back). Two women wear crop tops that show their arms, cleavage and abdomens. A zombie woman wears a bra top and skirt made of scarves that show her legs to the upper thighs, along with shoulders and cleavage.

Army of the Dead VIOLENCE/GORE 10

Army of the Dead LANGUAGE 8

Army of the Dead SUBSTANCE USE

– A woman smokes a cigar in four scenes, and a man smokes a cigarette outside. A man and a woman drink from beer bottles, a woman on a plane pours champagne and she and two others sip from their glasses, beer cans are tied to a newlyweds’ car, and people shoot empty beer bottles off a wall.

Army of the Dead DISCUSSION TOPICS

Army of the Dead MESSAGE

– Health disasters can be overcome by groups of diverse people working together. 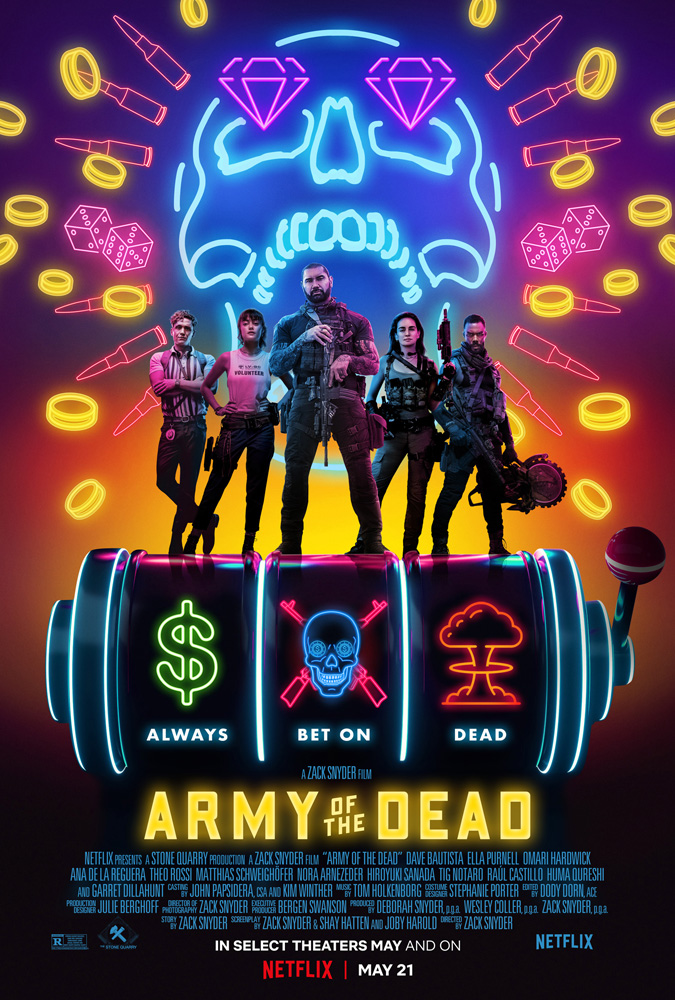