An elderly couple (Jean-Louis Trintignant and Emmanuelle Riva) have lived a life of sophistication, filled with music. After the wife has a stroke, the husband becomes her caretaker and it tests the strength of their bond. Also with Isabelle Huppert, Alexandre Tharaud and William Shimell. Directed by Michael Haneke. In French with English subtitles. [2:07]

SEX/NUDITY 4 - A woman tells her father that she had been awakened multiple times as a child by the sound of him and her mother having sex, but that it reassured her that they loved one another. A husband tells his ill, infirm wife that as a child at camp they had been instructed to jump into a cold lake and he speculates that it was to calm any "prepubescent urges."
► We see a paralyzed, ill, older woman in a bath while being bathed by another woman and the older woman's bare breast is visible. We see an older man pulling off his pants (a small portion of his bare buttocks is visible) and then immediately he pulls them back on. We see a portion of an older woman's bare stomach as another woman puts a diaper on her (we do not see the diaper); the older woman is upset by the woman's step-by-step description of how to position the diaper.

VIOLENCE/GORE 5 - A husband places a pillow over his infirm wife's face; we see her struggle for a minute as he lays his entire body over the pillow, he sits up, pauses, leaves the pillow over the woman's face, and then places flowers in the room with his dead wife and places tape over the door.
► Police officers break into a home, and one officer walks around and holds his nose; he then discovers the dead body of a woman and we see flowers around her head.
► An older man warns his ill wife that if she does not drink water, she will die; he asks her if she wants to die, she does not respond and he adds that if she does not willingly drink water she will have to be hospitalized and force-fed and the woman takes a drink, spits it out, the man slaps her, and a moment later apologizes.
► An older woman, after suffering a stroke, is found by her husband on the ground after he hears a shout in the middle of the night; she appears unharmed, but we see a table that has been toppled and the older man chides her for being stubborn. An older woman becomes non-responsive while sitting at a table, and an older man places a towel on her face and neck and she does not respond; she "awakens" with no sign of injury or illness, other than unsteady hands and the woman pours tea and it is obvious that she had a small stroke.
► We see an older woman slowly deteriorate in health throughout the movie: she suffers from two strokes and after the second stroke she is not only restricted to bed, but is also unable to communicate and she expresses that she is in constant pain, shouting "pain."
► A woman is very upset and crying after seeing her elderly mother in bed, struggling to speak, after suffering a second stroke; the woman shouts at her father, saying it is not fair to keep her mother in the house. A woman shouts at an older man after he fires her from her job. An older man wakes up, screaming, in the middle of the night after dreaming that he had discovered a water-filled hallway and an unseen man places a hand over the older man's mouth to suffocate him. It is implied that an older man has disappeared; we see him having a hallucination, seeing his dead wife (whom he suffocated after she suffered multiple strokes) and the man is not seen again, but we see him in the hallucination walking out an apartment door.
► An older woman, after suffering a stroke and being partially paralyzed, tells her husband that she does not want to live any longer, saying that she is obviously a burden on him. We hear a husband tell his adult daughter that her ill mother has become helpless and it is embarrassing for her and she is unhappy. An older man tells a woman that the woman's mother had been to the doctor and was diagnosed with having a blood clot in her brain and if she did not have surgery that she could have another, more serious stroke. A woman and an older man (her father) discuss how a woman had attempted suicide for attention, but was better after her husband returned to her. An older man tells his wife that he had gotten diphtheria as a child at camp and was sent to the hospital to be quarantined. An older woman asks her husband to never take her back to the hospital, implying that if she would have another stroke, she would want him to allow her to die peacefully. An older man and an older woman discuss how they had found evidence of a person breaking into their home using a screwdriver; the woman poses a hypothetical question: if they had been in bed what would have happened, and she tells the older man that she had heard from another woman about burglars that had entered a woman's apartment after simply knocking on the door and letting themselves in. We hear an older man on the phone, discussing with a person about fixing a door; a person had attempted to break in.
► We watch an older man chase a pigeon around his house; he attempts to put a blanket over the pigeon multiple times and we then see the older man succeed in catching the bird.
We see an older man lift his wife from the toilet (no nudity is visible) and it is implied that the older man wipes the older woman clean after helping her up. We see a large stain on the back of an older woman's clothing and as her husband lifts her from bed, we learn that the older woman had urinated on herself (the older woman had a stroke and is partially paralyzed); we see a large wet spot on the bed. An older man tells his wife that another couple had to wait for three "unpleasant" days after their toilet was clogged.

SUBSTANCE USE - We see a man smoking a cigarette.

DISCUSSION TOPICS - Stress in a marriage, health effects of having a stroke, disappointment, frustration, embarrassment by one's own deteriorating health, being a caregiver, assisted suicide. 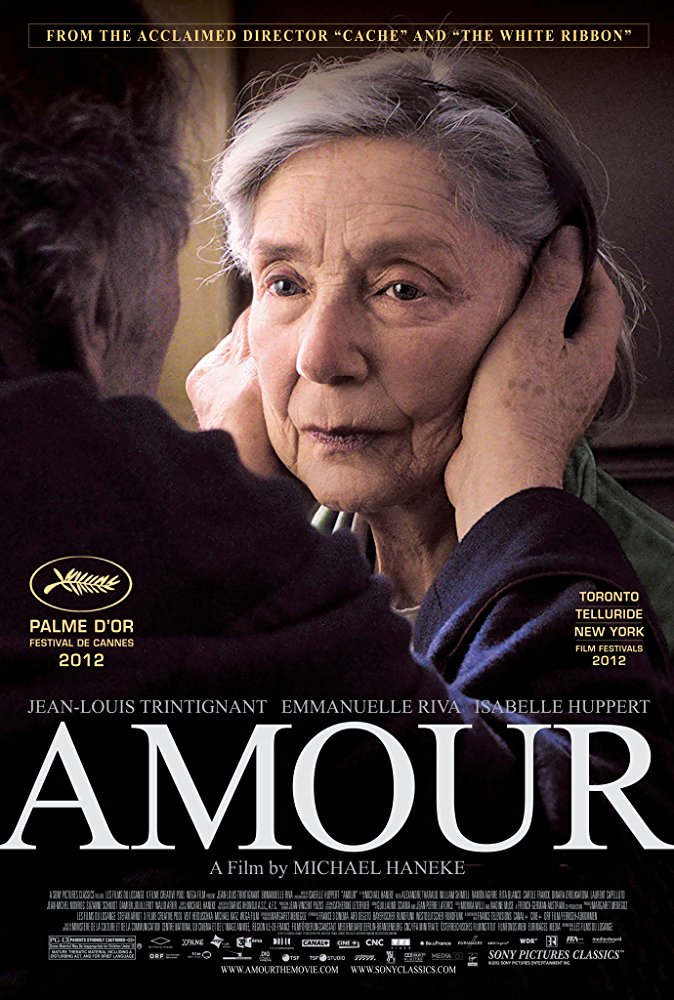