The familiar Lewis Carroll tale is reinterpreted by being framed as the story of a grown-up Alice (Mia Wasikowska), who is manipulated into a marriage to a young man she does not love. When she runs away after he proposes during a party, she falls through a deep hole that brings her to the world of the Mad Hatter (Johnny Depp), the Red Queen (Helena Bonham Carter), the Cheshire Cat and other magical characters. Also with Stephen Fry, Michael Sheen, Christopher Lee, Matt Lucas, Anne Hathaway, Crispin Glover and Alan Rickman. Directed by Tim Burton. [1:49]

SEX/NUDITY 2 - A woman wears a low-cut dress that reveals very deep, and very exaggerated cleavage and the top of her unnaturally protruding breasts. Women wear low-cut dresses that reveal cleavage in a few scenes. A woman lifts the skirt of a younger woman to reveal that she is not wearing stockings (we see her bare shins) and they discuss not wearing a corset. A young woman shrinks to a very small size and her dress falls off her (she cinches up the undergarment she was wearing and reveals bare shoulders). A young woman grows very tall and we see her dress become very short and reveal her bare thighs. Part of a man's oversized abdomen is seen (it turns out to be fake). A young woman grows to large proportions (we hear her dress ripping as she grows), a hedge hides her but it is implied that she is naked.
► A married man passionately kisses another woman, and his wife's young sister sees them. A man kisses a woman's hand romantically.
► A man pins a woman against a wall and says, "I like you, I like largeness." A man praises a woman flirtatiously. A woman says that another woman can make anyone fall in love with her, such as, "Men, women, furniture." A man tells a woman that another woman "forced herself on me." A young woman asks two other young women about their swimming naked in a pond. A rabbit makes a remark about women being unclothed. A young woman tells a man that she has had a vision of all of the men at a party wearing dresses and he seems dismayed.

SUBSTANCE USE - A blue caterpillar is shown on large mushroom cap while smoking from a hookah pipe and in one scene it blows smoke in the face of a young woman, who complains.

MESSAGE - Follow your own path, not one that is chosen for you. 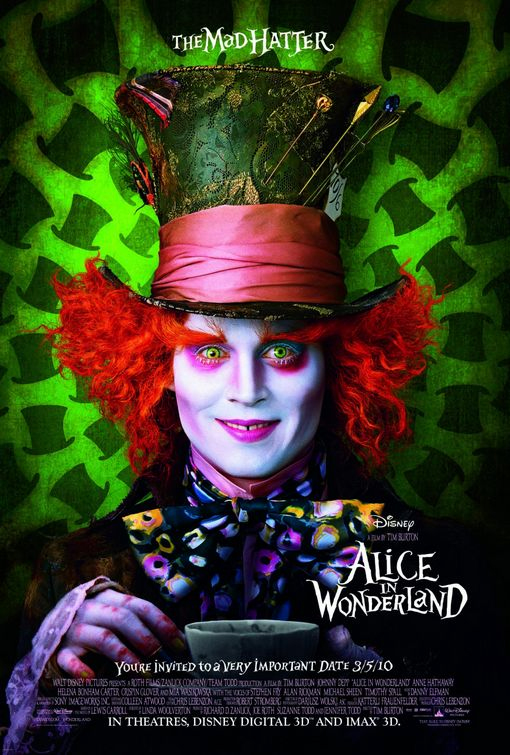