Why is “After We Fell” rated R? The MPAA rating has been assigned for “sexual content and language.” The Kids-In-Mind.com evaluation includes several sex scenes that include partial nudity, a phone sex scene, flirting that leads to infidelity, a few fights leading to bloody facial wounds, many arguments ending in tears, many conversations and arguments about alcoholism, and nearly 40 F-words and other strong language. Read our parents’ guide below for details on sexual content, violence & strong language. A couple’s relationship begins to deteriorate after the woman (Josephine Langford) prepares to leave for a job in another city. Then her father arrives and creates problems with his alcoholism, as her boyfriend (Hero Fiennes Tiffin) reveals unsavory details about his own family. Also with Louise Lombard, Rob Estes, Arielle Kebbel, Chance Perdomo, Frances Turner, Kiana Madeira, Carter Jenkins and Mira Sorvino. Directed by Castille Landon. Directed by Castille Landon. [Running Time: 1:38]

After We Fell SEX/NUDITY 7

– A man hears groaning and panting in the kitchen and finds his mother sitting on a counter with a clothed man thrusting between her legs (we see her bare arms and legs to the upper thighs in a hiked up opaque nightgown); the woman gasps, rushes away and the man zips his pants (no flesh is visible) as the son shouts and curses (please see the Violence/Gore category for more details). A man sits on a hot tub seat and a woman wearing a bikini (revealing cleavage, abdomen and thighs) straddles him, they kiss a few times, he unhooks her bra (we see close-ups of his bare chest, her back and their grimacing faces) and he thrusts as they both grunt, groan and pant while a suggestive song plays in the background. A shirtless man wearing biker shorts (his bare chest, abdomen and back are shown) lies on a bed and pulls a clothed woman on top of him; he rubs ice on her throat and inner thigh after raising her skirt, he rolls onto her and kisses her several times, and we see thrusting and hear panting as the scene ends (a blanket covers the couple to above the waist). A woman wearing a negligee straddles a seated man on a weight bench and she begins to thrust; we see close-ups of his side and thighs as thrusting continues with moaning and gasping and they watch themselves in a wall mirror as he pushes down the negligee bodice (we see her bra and cleavage); they continue thrusting and panting as the scene ends. A man has a nightmare in which his girlfriend and another man under a quilt seem to be having sex; we see thrusting and then see their faces gasping as the dreamer wakes up, screaming.
► A man and a woman on a phone call in their darkened bedrooms mention phone sex and begin rubbing their groins during the conversation and the scene ends. Two men watch two women they know as the women dance in a disco, bumping hips; one woman dances alone, rubbing her own hair, abdomen and thighs and one of the men dances with her and they kiss for several seconds. A man avoids being struck by a cyclist and walks on to embrace and kiss a woman. A woman and a man kiss briefly in a few scenes.
► At a family dinner in a restaurant, a man introduces a woman to his girlfriend, letting her think they are old lovers; the girlfriend begins to flirt with a waiter and the first man sneers and grumbles (please see the Violence/Gore category for more details) and later, the introduced woman tells the girlfriend that she is gay and has a girlfriend. A woman gets a waiter’s phone number and her boyfriend finds it and becomes angry for a few days. A woman calls her boyfriend, hears another woman’s voice in the background and hangs up; he calls her back and she learns he is in a gym where there is a woman trainer. A woman goes to her doctor for birth control when she is told that because of a cervix problem, she might not conceive. A man and a woman tell another woman that they are expecting a baby.
► A woman wears a series of tight scoop-top blouses that reveal cleavage. Two women wear deeply cut cocktail dresses that reveal significant cleavage. A woman wears a deeply cut top that reveals cleavage and a short skirt that ends mid-thigh. A woman wears a short skirt that reveals her bare legs to the upper thighs. A shirtless man wearing shorts (we see his bare chest, abdomen, back and legs to the knees) reveals tattoos of thin black ribbons and an outline of a coiled snake in half a dozen scenes. A man leaves a hot tub wearing a long towel (we see his bare chest, abdomen and back).

After We Fell VIOLENCE/GORE 4

– A younger man and an older man in a bar look at a picture of the first man’s girlfriend and another man lurches forward and mumbles something about her; the first two men get up and the older man pushes the third man away, but the younger man punches the third man unconscious. A younger man curses several times, shouts at his mother and an older man, and punches the man in the face a couple of times and the stomach three times; the woman breaks up the fight, cries, and the younger man leaves.
► A man and a woman argue loudly in several scenes; the man is bullying and controlling. Two men and a woman loudly argue and the woman cries. A woman and two men argue loudly for a few seconds. A man sits with another man in a bar, they argue, and the first man walks out angrily. A man thinks a waiter is flirting with his girlfriend; he gets up from the table and slams a shoulder into the waiter’s back. In a flashback, a woman shouts loudly and kicks her husband out of the house because of alcoholism, while their preteen daughter tearfully pleas to let him stay.
► A woman lets her alcoholic father stay with her and her boyfriend, but the boyfriend offers the older man money to leave and he declines. A man enters an apartment and hears coughing, he carries a ball bat around and drops it when he sees another man sitting on the bathroom floor, groaning because he was beaten (we see blood on the man’s forehead, eye and nose).
► A few scenes show one or more men hitting punching bags fast and hard and grunting. A man and a woman brush their teeth and we hear them as they bend below the frame and spit.

After We Fell LANGUAGE 8

After We Fell SUBSTANCE USE

– A woman purchases a morning-after abortion pill (we do not see her use it). Men and women in a disco bar hold and sip from glasses of mixed drinks, two men sit in a bar where one man drinks a glass of beer and we see a full glass of beer on an empty table, several men and women sip from glasses of wine at the bar, a man enters a bar and orders an Old Fashioned cocktail but does not receive it, two men drink beer as a shot of whiskey is poured in close-up but we do not see anyone drink it, a man drinks a short glass of whiskey at home, a man and a woman drink from glasses of wine and the woman giggles and slurs her words, a man and a woman argue about his alcoholism a few times, a man criticizes another man for drinking even though he himself still drinks, and a man says he is sober and has quit drinking.

After We Fell DISCUSSION TOPICS

After We Fell MESSAGE

– Families can have complicated problems and alcohol abuse worsens them. 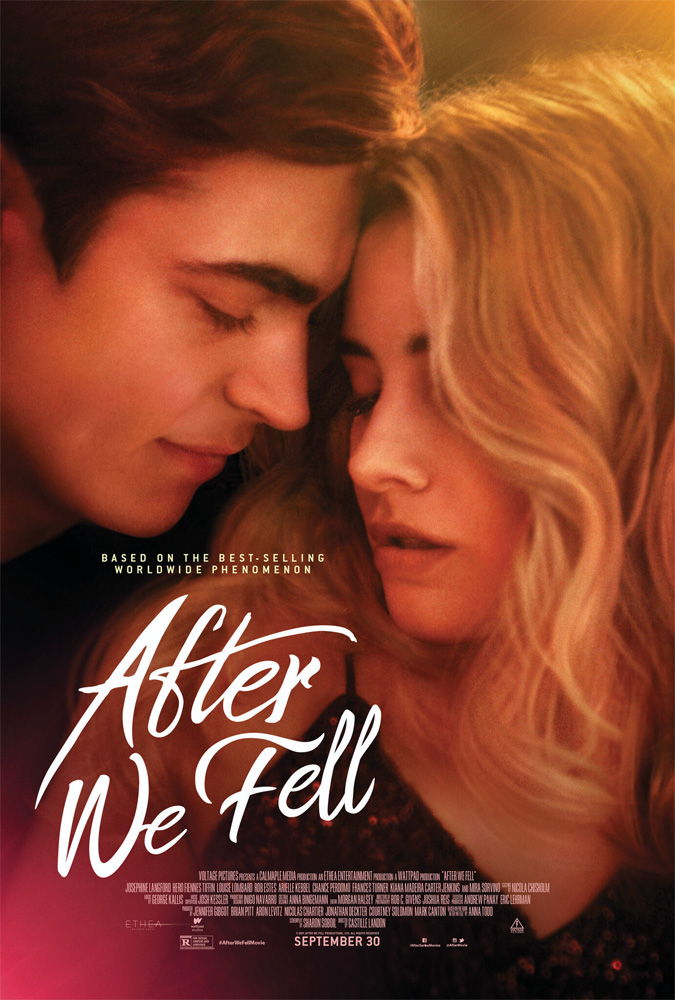