Friendless and harassed by bullies, 10-year-old Max creates two imaginary friends that help him through moments of sadness and stress. But reality and fantasy cross paths, and soon Max is off on a mission to Planet Drool where his superhero friends Shark Boy and Lava Girl live. Most of the action takes place in a dream world as a stream of consciousness. With Taylor Lautner, Taylor Dooley, Cayden Boyd, George Lopez and David Arquette. Directed by Robert Rodriguez. [1:32]

SEX/NUDITY 2 - Lava Girl kisses Shark Boy on the cheek, and he sizzles; plus Shark Boy puts his arm around Lava Girl, and his arm sizzles and he pulls it away.
► A girl wears a short top that reveals her bare abdomen and a woman wears a low-cut top that reveals cleavage.
► A boy refers to a girl as "hot."

VIOLENCE/GORE 4 - Lava Girl's leg pops off at the knee, she goes back for it and she sticks it back on (the leg does not seem to be artificial, but the reality where everything takes place is). Lava Girl melts into a puddle (she comes back to her normal form later). Lava Girl's feet are frozen into ice cubes. Lava Girl's head spins completely around and we hear a squish and a creak. Lava Girl touches Shark Boy on the arm and he sizzles.
► Two characters lie motionless on a bank and we fear that they are dead. A character falls into water and is attacked by many sharks (we see him thrashing, but no blood or anything else; it's not clear if he survives or not).
► Brains fall from the sky and splat on the ground (we hear squishes and spurts when they hit). Brain matter also splatters on the screen. A character's head inflates and he topples over.
► Shark Boy is zapped repeatedly by electric eels swimming beneath his feet. He is also chased by many electric eels in the water, he tries to swim away, they continue to zap him, and he sinks to the bottom motionless; a boy touches the water and is shocked, and Lava Girl dives into the eel infested water and pulls Shark Boy to the surface. A boy is zapped on the backside by an electric bolt.
► Shark Boy, Lava Girl and a boy are locked in a cage: Shark Boy becomes very angry and his teeth become pointed (like a shark's teeth), and he uses them to tear apart the cage to free them.
► A boy throws a journal at another boy hitting him in the head. Bullies throw paper balls at a boy. Bullies chase a boy through the playground trying to get a book away from him, they climb up a rope ladder, one slips and hits his crotch on a rope, and he falls back and drops the book on the ground -- the bullies get it.
► A toddler feeds fish to sharks while standing at the end of a pier. Two characters fight each other: one shoots piranhas at the other, who fends them off with bubbles.
► A large storm swirls in the ocean toward a boy standing on a pier, it destroys the pier, we see the boy in a raft while the boy's father drifts in the other direction, and the boy's raft is surrounded by sharks who actually protect him; he rides on the back of one shark and is taken into a cave where we hear that he grows up and begins to develop shark gills, fins and instincts. A man and a woman are sucked into a large funnel cloud, but they are retrieved and brought out of it. A large funnel cloud blows and swirls toward a school building, the windows are blown out, and the children in a classroom fall to the floor under their desks.
► Shark Boy throws Lava Girl into a volcano, and she emerges shooting lava from her hands. A narrow walkway begins to melt under Lava Girl's feet, she sneezes, blowing Shark Boy back (he nearly falls off the walkway), and they rush across and get to the other side just as the walkway falls away.
► Two boys ride rock pillars that shoot up into the air, a rope bridge joins them, they walk out onto the bridge and it breaks; one catches the other as they fall, and they soar on wooden planks that spin like helicopters. A boy climbs a tall ice column, he retrieves an ice crystal, he drops it to Lava Girl who catches it and she is turned into ice, and they are surrounded by guards. Lava Girl shoots a stream of lava at Shark Boy's backside. A boy eats lava rocks and spits out fire. A girl freezes a character, who explodes into many snowflakes.
► Lava Girl is wrapped up in cables and shocked, a boy fights them with punches and kicks, then with a stick, and two cables surround the boy and zap him. Electric bolts are shot toward Lava Girl (she's ok). Electric cords writhe like snakes, and Shark Boy and Lava Girl fight with several of them.
► Many creatures charge toward Shark Boy, Lava Girl and a boy, and the children ride on a vehicle that shoots fudge at the creatures. Shark Boy, Lava Girl and a boy ride on a trolley, it speeds across a planet's surface, they jump from the trolley, and they land on a chocolate cookie floating in a milk river.
► Shark Boy, Lava Girl and a boy fall off a conveyor belt and land on the ground. Two boys and a girl sit on a platform that rises high into the air. Shark Boy and Lava Girl stop a speeding roller coaster. Shark Boy, Lava Girl and a boy skid and land on a planet in a shark-shaped flying vessel.
► A bully tells Shark Boy that his father is "at the bottom of the ocean." We hear about Lava Girl and see her with glowing lines along her suit. A boy takes Shark Boy home with him and cares for him in his shower stall, which is filled with water. A huge glowing face speaks to a character with a booming voice. We hear that a planet is dying. Shark Boy tries a piece of chocolate and spits it out.

MESSAGE - Dreaming can keep you from seeing what's right in front of you. 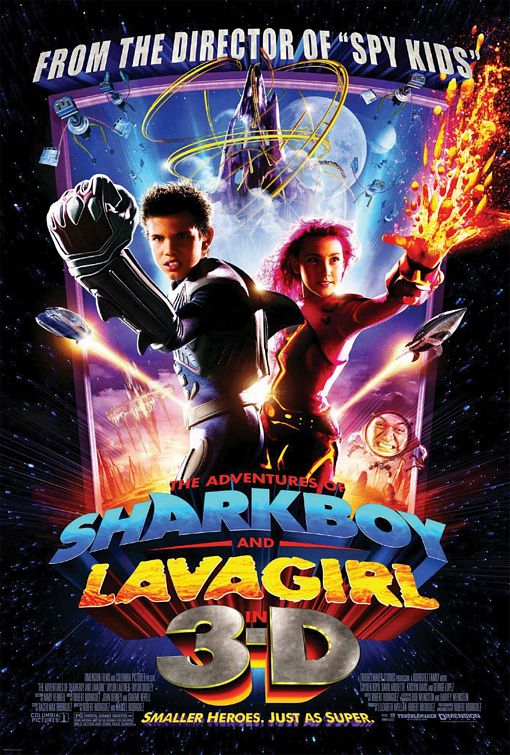