A politician (Matt Damon) meets a dancer (Emily Blunt) by chance and instantly falls in love, only to have a mysterious force attempt to keep the two apart, by any means possible. When he finds himself confronted by The Adjustments Bureau, he watches as his fate and his sense of free will begin to unravel. Also with Michael Kelly, Anthony Mackie, John Slattery and Terence Stamp. Cameos by Jon Stewart, Margaret Thatcher, James Carville, Mary Matalin, Betty Liu and Michael Bloomberg. Directed by George Nolfi. [1:39]

SEX/NUDITY 5 - A man and a woman kiss passionately, we see the shadowed outlines of their bodies (presumably nude) as they kiss and then are seen engaging in sex with the man on top of the woman (a portion of his bare back is visible and they are later seen sleeping, with his arms wrapped around her; it is implied that they are nude under sheets).
► A man and a woman kiss passionately. A man and a woman kiss, the man puts his hand on the woman's back (her bare back is exposed from the low-cut dress) and they are interrupted by another man walking into the room. A man and a woman hold hands and the man kisses the woman on the cheek. A man is interrupted, as he is about to kiss a woman.
► Throughout the movie, a woman wears a variety of cleavage-exposing dresses and short skirts. A pair of cover-up underwear are briefly seen when a woman's dress is lifted up during a dance performance. A group of women wear tight dance costumes with low-cut backs.
► A woman and a man kiss. A man and a woman hug. A man kisses a woman on the cheek. A woman wraps her arms around a man.
► A woman teases a man for staring at her legs, and the man makes a remark about how short her skirt is and they flirt. A woman teases a man for implying that she is a stripper when she tells him she is a dancer. A man jokes with a woman that says she will dance for him on a pole. A man tells a woman that he had woken up thinking about her after they had kissed. It is implied that a newspaper ran a full-page picture of a man's bare buttocks; we do not see the photograph. A man mentions how another man's behind had been seen after a picture of him "mooning" a group of people was released and printed. A woman jokes with a man about a photograph of a man "mooning" people, saying he can relate because he "pulls his pants down." A man jokes over the phone with another man that he will pull his pants down.


VIOLENCE/GORE 5 - A man watches as a car T-bones a taxi, we hear the crash and the taxi driver is seen with blood coming from a cut above his eyebrow and a small amount on his lip; the driver tells the man that he is okay, and while we do not see clearly the other driver, we understand that he is unharmed. A man is struck by a car, he slams into the windshield and rolls to the ground; the windshield spiders but the man is unharmed.
► A man punches another man, his body spins from the force, hits the ground and he appears to be unconscious. A man punches another man, and he spins around from the force, but is unharmed. A man shoves two men out of the way, one of them falls to the ground and the other hits a table and then falls to the ground. Two men lift up a man and throw him through an open door; we see him lying on the ground moments later, unharmed.
► A man races through an office building as several other men chase him, they catch him and pin him to the ground; we see him moments later, appearing to wake up with his hands tied to a chair. A man and a woman race through a series of doors, buildings and streets, including racing across a busy street as cars honk and swerve to avoid hitting them. A man runs through a crowded city street, we hear cars honking and see two cars come to an abrupt stop to avoid hitting him. A man causes a tile on a concrete floor to raise, tripping another man that's attempting to run from him; we hear the man's body slam into the concrete and he winces in pain before two other men grab him and drag him back to a chair (he appears unharmed).
► A man instructs a taxi driver to drive through a series of red lights, we see a man and a woman leap out of the way to avoid being struck and cars honk and brake to avoid hitting the taxi as it runs red lights.
► A woman falls as a man lifts her during a dance performance, she hits the ground, we see her being carried away and she is seen in a hospital receiving an X-Ray; we learn that she sprained her ankle and will be okay. A woman shoves a man on the chest and shouts at him. A man accidentally runs into another man, knocking him to the ground and several people shout at him. A man stumbles into a woman and pushes her out of the way. A woman jokingly punches a man in the stomach and he doubles over, but is later seen unharmed.
► We see a man's mugshot and newspaper headlines that read that a man had been arrested for a "bar brawl." On multiple occasions a man is confronted with information about a "bar brawl," when he had punched a person in a bar.
► A man shouts angrily at several men. A man shouts at a man. A man shouts at a man and a woman.
► Several men discuss how a man will be "reset" and his memories will be erased. A man tells another man that he will be "lobotomized." A man lists a series of events that had almost ended a war through violence, including saying that the world was almost "blown to bits" during the Cuban Missile Crisis. A man tells a woman that his mother had died and a month later his brother had died, followed by his father when he was a teenager. A television reporter announces that a man's brother and mother had died when he was younger, followed by his father when he was a teenager. A woman tells a man that she is hiding from security in a men's restroom and we later see her running as two security guards approach her.
► A man shoves against a door, breaking a wooden handle to keep the door closed. A man accidentally spills coffee on a woman, and the woman then jokingly puts the man's cell phone in his cup of coffee.

SUBSTANCE USE - A man tells a woman his brother had "overdosed" but does not mention the drug. Men and women are seen with drinks in front of them at a bar, a man is seen drinking a bottle of beer, a woman is seen holding a presumably empty champagne bottle, and a man jokes that he expects another man to shout, "chug!"

MESSAGE - Fate and free will are quite contested concepts. 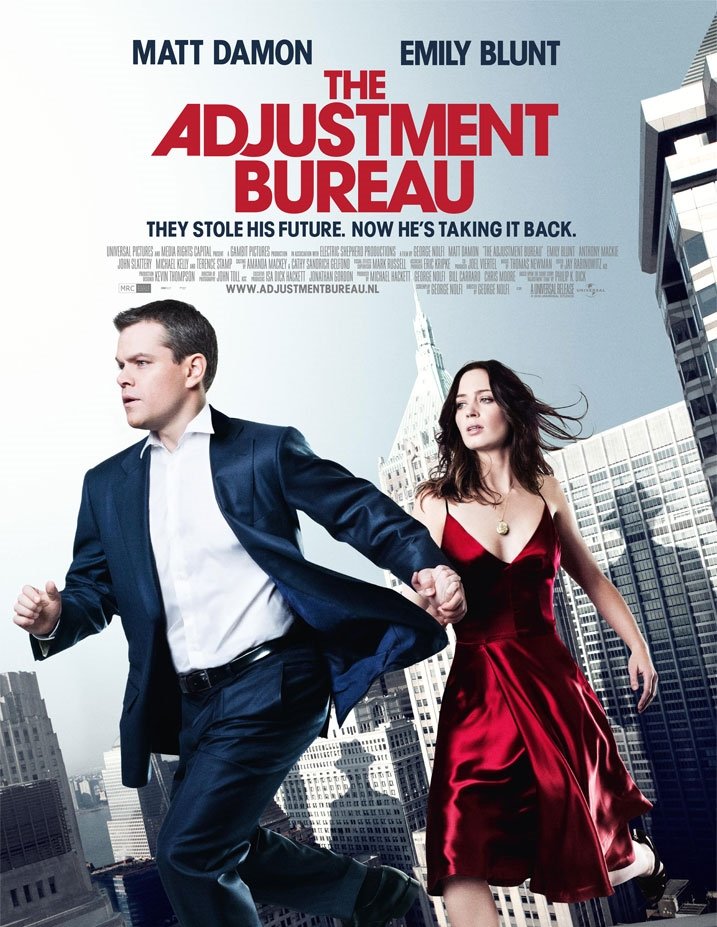