SEX/NUDITY 5 - Many instances of subtle sexual innuendo, a couple of passionate kisses (in one scene, a woman straddles a man and kisses him briefly). A shirtless man takes off a woman's skirt and shirt (we see her bra and panties), kisses her passionately and pulls her on top of him before the scene ends. Two post- or pre-coitus scenes: in both, we see the backs of a nude couple in bed, talking and kissing; in one, the woman also runs an ice cube over the man's bare chest and arm. Several people look at a couple's orange bodies (one lying on top of the other) on a screen that detects heat. A man briefly runs his fingers over a woman's bare thigh (her torso is covered with a blanket); and she runs an ice cube down her face and neck and presumably on lower areas (her hand goes off-screen). While wearing special glasses, a man sees many women's bras and panties underneath their clothing; also, we see lots of cleavage and a brief, partial glimpse of a woman's bare breast. Lots of women and shapes of women dance during the opening credits.

VIOLENCE/GORE 6 - A man is stabbed in the back of the neck and another is impaled with a rocket (no blood is visible). Lots of people are shot, but we never see any bloody gunshot wounds; also, lots of scenes in which gunfire is exchanged, people are nearly shot and people are threatened with guns. A dummy is shot and torched during a training session. Two people are caught in an avalanche but aren't injured. A man hanging onto a hot air balloon falls onto a building's roof and roughly tumbles down it for a few seconds (he injures his arm). A man's neck, wrists and ankles are locked into a torture device and a small bar is cranked into the back of his neck. A man purposely punches his hand through a table and a woman pulls a shard of glass from his bloody knuckles. A man forces another to hold an extremely hot rock, a man squeezes another's injured arm, a man hits another with a gun (he gets a bloody cut on his forehead) and a man uses another's head as a battering ram (we see some bloody cuts on his forehead). During a fight scene, two men punch, choke, elbow and kick each other; also, two slaps and some punches, shoves, slamming into walls and poles and kicks to the chest and head. An extended boat chase during which a boat drives through another (one of the boats explodes), a boat is hit with rockets and explodes and a boat is launched onto land and drives through streets, a market and a restaurant (many people are nearly hit). A hot air balloon explodes, a helicopter explodes, a small plane crashes into a tree, a snow mobile crashes into a bank and two planes crash into each other (all passengers are presumably killed). Lots of explosions (sometimes killing people, though we never see them) and lots of property damage. Men are chased by a large saw-blade device hanging from a helicopter; the blades also saw through a building and a car. We see several corpses in different scenes; one is thrown into a dumpster and some are thrown into the sea. A car falls into water but its passengers swim to safety. After an explosion, a man has bloody facial cuts and a bloody cut on his hand. We see a man with a gunshot wound scar on his forehead and learn that the bullet is still in his brain.

MESSAGE - James Bond always gets the bad guys and the beautiful women. 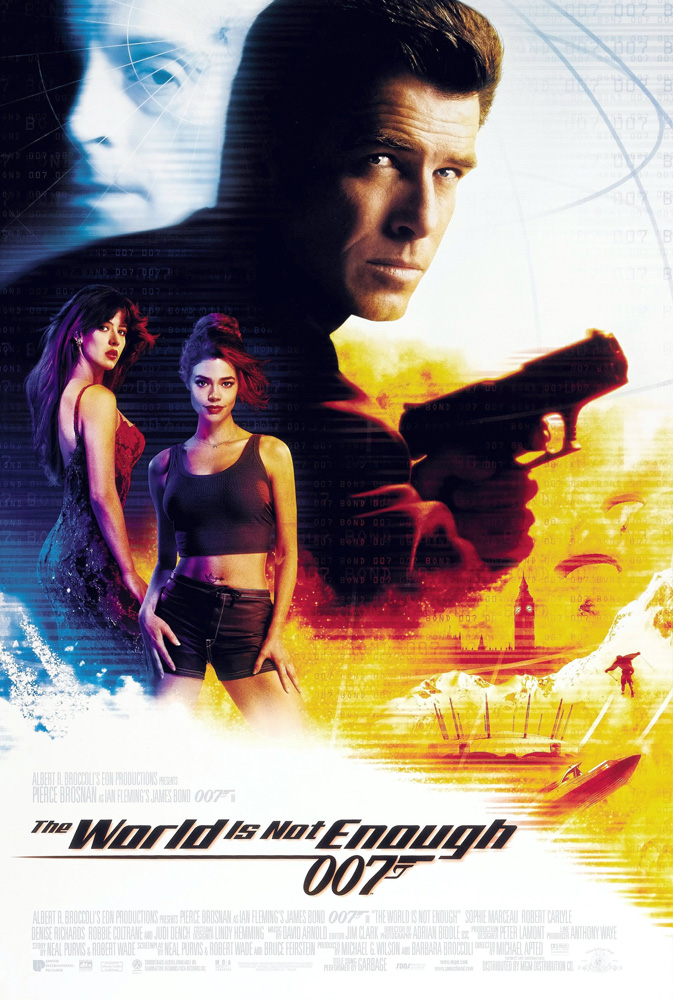