The world famous monster is back to take on a giant meteor/UFO -- and Tokyo isn't happy about it. With Takehiro Murata, Naomi Nishida, Mayu Suzuki, Hiroshi Abe and Shirô Sano. [1:37]

VIOLENCE/GORE 5 - Note: Much of the violence comes off as unrealistic and plastic, but the noises the monsters make are loud and could be scary to some viewers. A man is crushed by an electrical tower, a man falls through a hole in a roof and apparently dies (we don't see him die), a man falls down an elevator shaft, a man punches another in the face, and a fireball almost hits a few people (no one gets injured). A UFO is destroyed by fire. A monster enters another monster's mouth and then the two seem to explode like a bomb, igniting fires around the city; one monster dies. A monster is shot at and hit numerous times by missiles from helicopters, tanks and fighter planes, suffering smoking burns and losing chunks of skin from the explosions; the monster is obviously in pain, making loud, scary noises when withstanding the hits. Two big monsters engage in a hand-to-hand fight (they punch, bite and shoot fire at each other); we hear loud monster roars and cries during this scene. A monster bites another monster's wrist; a monster bites another monster's arm. A monster torches another monster by breathing fire on it; also, a monster breathes fire several times, one time knocking another monster into the sea, another time destroying a UFO, and another time torching a building. Several times a meteor/UFO shoots a line of fire (heat laser) and hurts a monster. A monster is tied and muzzled with large cable wires and then pulled to the ground and dragged through the city destroying many buildings; the monster writhes, obviously in pain. A skyscraper falls on a monster. A monster's tail destroys a building; the people in it are obviously scared. In a few scenes a monster romps through a city and crushes several trains, cars, buildings and power lines, causing several sparks and fires; in one scene this causes a blackout in the city (people run in fear). A big meteor/UFO almost crushes a boat; another time it almost crushes and actually does set fire to a building, causing it to explode. A bridge, a few helicopters and a car are destroyed by a big meteor/UFO. A monster roars at a car, shattering its windshield, and a monster chases a car through a tunnel. A car wrecks into another car.

MESSAGE - Godzilla is inside each one of us. 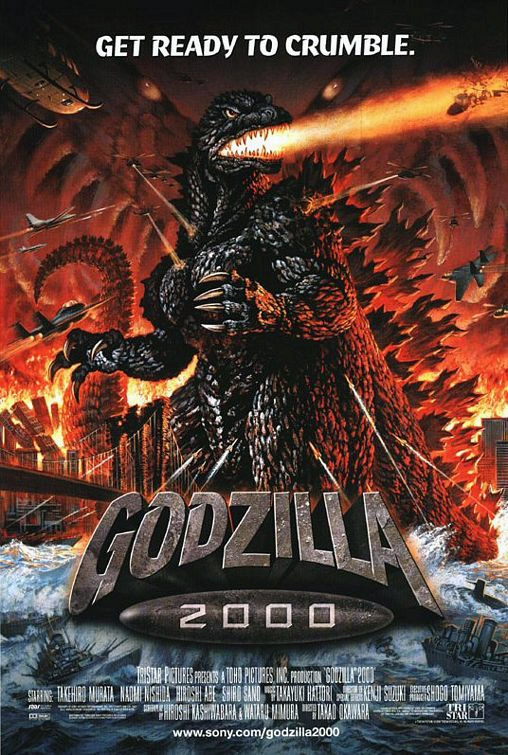