Set in the period between 1939 and '45 and based on a true story about the keepers of the Warsaw, Poland zoo and their efforts to save hundreds of Jews from the invading Nazis. With Jessica Chastain, Johan Heldenbergh, Daniel Brühl, Timothy Radford, Efrat Dor, Iddo Goldberg, Shira Haas, Michael McElhatton and Val Maloku. Directed by Niki Caro. A few lines of dialogue are spoken in German and Hebrew with no translation. [2:04]

SEX/NUDITY 6 - Two soldiers speak to a young teen girl, caress her hair and take her into a building and rape her: when we see the girl later her clothing is torn, she has bloody scratches and blood streams down her legs). A man sexually assaults a woman: She asks him to help her find her husband and he asks what he will get in return; she unbuttons her blouse, he removes a ribbon from her hair, kisses her, kisses her on the neck, throws her onto a bed and presses between her legs (we see her bare thigh, stocking top and garter clip) while kissing her aggressively (she tries to get away, he stops and she says, "You disgust me").
► A husband and his wife lie in bed talking; the man is shirtless and we see his bare chest and abdomen and the woman is covered with a sheet, but we see her bare shoulders and breasts briefly. A husband and his wife snuggle in bed (she is shown wearing a nightgown that reveals cleavage and bare shoulders). A woman wears a low-cut nightgown that reveals cleavage and the outline of nipples through the fabric. Women wear low-cut dresses that reveal cleavage and bare shoulders at a party. A man is shown wearing boxer shorts and a T-shirt while lying in bed.
► A wife sits on a bed and removes her blouse (we see her bare shoulders and she is shown wearing a camisole), her husband sitting near her on the bed kisses her and lays her back on the bed (sex is implied). A husband and his wife kiss in several scenes.
► A man leans close to a married woman and seems to be trying to kiss her; she pulls him close and holds his ears to keep him from hearing crying coming from the basement, and the man kisses her hand and leaves. A man caresses a married woman's hair and face and washes her hands and arms in one scene.
► Two bison breed: we see the male mount the female while a man holds a woman who holds a rope that keeps the female in place and the man presses very tightly against the woman.

VIOLENCE/GORE 6 - Polish resistance fighters engage German soldiers and exchange fire; we see a few soldiers shot (blood spurts) and one is set on fire (we see him running and yelling) and a man is shot in the neck (he falls to the ground and appears to be breathing) and we hear he was taken to a concentration camp.
► Two women are told to come out of their apartment and kneel on a sidewalk where they are both shot in the head by German soldiers (we see blood spurt and they slump on top of each other where they are left).
► We see a ghetto where people are crowded into an area and stand in line for food; soldiers yell orders at them and two soldiers speak to a young teen girl, caress her hair and take her into a building and rape her; when we see the girl later her clothing is torn, she has bloody scratches, blood streams down her legs and she appears to be in shock. A man sexually assaults a woman: She asks him to help her find her husband and he asks what he will get in return and he throws her onto a bed and presses between her legs (she tries to get away, he stops and she says, "You disgust me"; please see the Sex/Nudity category for more details).
► Soldiers search the grounds of an empty zoo looking for people being hidden and an officer chases a young boy, he catches him and forces him to lock his mother in an animal cage; the man takes the boy off-screen and we hear a shot (we assume the boy was shot but he was not).
► Planes fly close overhead and drop bombs in and around a zoo; a woman and her young son are thrown to the ground by a blast, animal cages and enclosures are blown up and animals scatter and panic; we see the bloody bodies of a zebra and a monkey and several birds, and an elephant is shot repeatedly and falls dead (we see bloody bullet wounds) while lions and a tiger prowl streets (we see bloody patches on the ground later).
► We see many dead bodies lying on the ground and being piled onto carts. Many animals are shot and we see their bloody bodies fall to the ground. We hear gunfire and a scuffle.
► Many Jewish people (men, women and children) are forced onto train cars to be taken to concentration camps, and their possessions are thrown onto a pile that is later burned. Many Jewish people are forced to leave their homes and go to a "ghetto" before being transported to concentration camps. German soldiers round up Polish soldiers and order them about. Many zoo animals are rounded up and placed on trucks; they are taken to a different zoo.
► A woman goes to an elephant enclosure where a female elephant kicks a newborn elephant that lays motionless on the ground; the woman struggles to open the passageway on the newborn and it begins to breathe (we see the newborn and the woman covered with goo). A woman yells in pain during labor and we see her holding a slightly goo-covered newborn baby.
► Men dump garbage into a truck and we see people hiding under the debris to escape a ghetto. Large flakes of ash float in the air when a ghetto is burned after the people are taken away to concentration camps (we see flame throwers blowing fire into buildings and all around). Soldiers splash gasoline around a bakery and set it on fire.
► A man describes having to shoot a lion and then bringing her cubs to a zoo. A woman says, "They are working the Jews like pack animals." A husband and his wife discuss leaving Warsaw before the Germans invade and the danger that is anticipated. We hear that the German government has taken control of the Polish people. A man talks about a zoo being liquidated. A young boy pleads, "Make it stop" as soldiers shoot several animals left in a zoo. A husband and his wife discuss hiding a woman in their attic to keep her safe from the Germans. A man says that Jews are "trapped and starving like rats" nearby. A woman says that her father was shot in St. Petersburg. A man describes that another man died from an ulcer that exploded in his stomach. A husband and his wife argue about another man touching her. A young boy yells, "Hitler ist kaput" as a German officer leaves the area and a woman grabs him and covers his mouth. A German officer pins a swastika pin on boy's sweater and yells, "Heil Hitler" while saluting and the boy does the same. We read that 300 people were hidden at the zoo and 298 survived.
► A young boy is shown sleeping in bed with two lion cubs. A young boy holds and pets a skunk in a few scenes.
► Several dead zoo animals are shown being placed in pits and buried; one is a bison with a bloody leg stump. A woman feeds a bison from her mouth and it gently takes the food. A woman bikes through a zoo and we see animals in cages pacing, jumping, and roaring. A man nearly collapses from weakness.

LANGUAGE 1 - Name-calling (stray barn cat), religious exclamations (part of a Seder prayer is sung, a man asks another man to pray for them as he and other people are loaded into train cars).

SUBSTANCE USE - Men and women hold and drink from glasses of champagne at a party, a bottle of liquor and a poured glass are shown on a dinner table, a man pours brandy for a man and a woman (the man drinks), a man drinks a glass of sherry and a man and a woman drink whisky or brandy, and soldiers drink liquor and smoke cigarettes while blowing horns on New Year's Eve (they appear inebriated). A man smokes cigarettes in bed in a few scenes, a man smokes in an office in a few scenes, and a man smoke son a veranda in a couple of scenes.

MESSAGE - The bravery and heroism of a few people saved many lives during the German invasion of Poland. 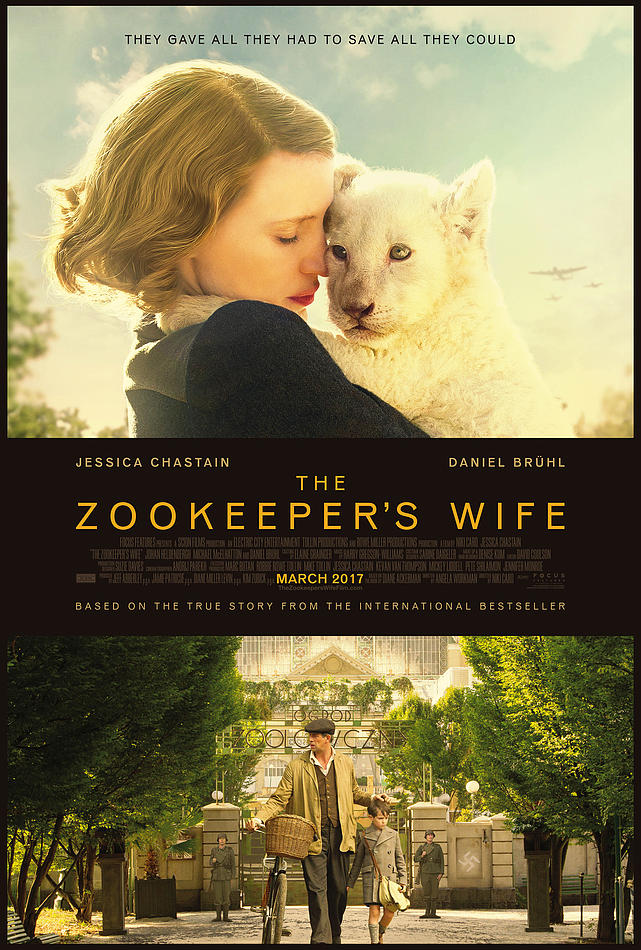