Jim Carrey stars as a man who finds no joy in life after his wife dumps him. To change his mood he enrolls in a self-help group called "Yes Man" and agrees to say "Yes" to everything for a year, but soon he realizes that sometimes acquiescing to everything brings constant and unexpected challenges. Also with Terence Stamp, Sasha Alexander, Bradley Cooper, Zooey Deschanel, Rhys Darby, John Michael Higgins and Molly Sims. Directed by Peyton Reed. [1:44]

SEX/NUDITY 6 - A man is shown lying on a bed with a woman on top of him, she moves out of the shot, and her hand appears and drops dentures into a glass of water on a bedside table; the scene ends with oral sex having been implied.
► A woman appears at a man's door every time he leaves his apartment, she offers him food and rubs up against him each time; in one scene she rubs against him, plays with his hair, asks why he is never seen with a girl, rubs her hands over his chest asking, "Do you want a release? A sexual release?" and she offers oral sex.
► A man and a woman walk into an empty amphitheater at night, they embrace on stage, exchange a prolonged kiss, and sink to the floor (it is unclear whether the couple had sex or not).
► In an auditorium we see an audience of fully nude men and women holding shopping bags in front of their crotches and chests; we see many bare legs, chests (no nipples), and partial buttocks. At a costume party we see bare-chested men. A woman singer wears very short shorts and a woman wears a sleeveless dress that reveals a lot of cleavage.
► A woman calls her ex-husband, kisses him, and asks him to stay the night but he leaves. Two young men each kiss a different woman in a bar scene. A man asks a woman to make out, and she kisses him. A man kisses a woman briefly and she asks him to live with her (he declines). A man kisses a woman twice, and a woman briefly kisses a man riding on the back of her motor scooter.
► At a party a woman approaches a man, she asks if he would like to leave with her, and they hastily exit; sex is implied and the scene ends. A man tells someone, "the nurse wants me," and gets into a hospital bed stating, "I'm gonna climb in bed in case that nurse comes back." Two men bump fists, while a third man misses the bump, stating, "I was gonna fist you." A man tells someone that every pretty girl should "have a good ball." A man looks at a man and woman embracing and says, "Oh look, they're touching each others' genitals; I'm so glad I came out tonight." A man tells a friend, "I have a thing. If I had a thing in front of me, I'd know what thing it was." A man tells his ex-wife and her boyfriend, "I am gone-ar-ee-a." An old man says to a younger man, "You cannot even summon the enthusiasm to masturbate." A woman tells her new boyfriend that his new slacks make his "package" look nice. A man reads a penis enlargement ad aloud to coworkers and states he does not need the product. A man makes an online date with a woman in a burkha, and they meet for lunch.

VIOLENCE/GORE 4 - An inebriated man slurs and staggers wildly in a bar, kisses a woman he doesn't know, and is accosted by her boyfriend; they get into a brief physical fight and one man is kneed in the groin and groans, he punches another man and is then carried away by two friends.
► A man argues with a friend because he does not want to go out and socialize. A man throws a stone through a window smashing it, two security guards chaese him and one dives to tackle him, but misses; there is a lot of yelling. A man is chased out of an amphitheater at night by a guard armed with a flashlight (there is a bit of yelling). At an airport, two Homeland Security agents grab a man and a woman and take them, in handcuffs, into the security section for questioning; the man is accused of being a terrorist.
► A man fleeing the advances of an older woman falls backward tumbling down a staircase; he is unharmed, but a German shepherd runs toward him barking and snarling but reaches the end of its chain before it can bite.
► A man stands on a ledge outside his apartment window, threatening to jump, and another man pulls him violently inside, where he sprawls on the floor and rescue vehicles arrive. A man jumps up from a stopped elevator to the floor, falls, rolls, and stands up.
► An old man hits a younger man on top of the head twice with a large microphone (he's not harmed). A man picks up another man by the neck and head and shakes him until the man shouts "Yes" (he's not harmed).
► A man gets in the back of a car to hide, he scares him, a van broadsides them and we see the man in a hospital bed, scratched over the face and arms; the other man is wearing a bandage around his throat with some blood on it and scratches across his face. A woman gives a man a ride on the back of her motor scooter, and they weave in and out of traffic while drivers honk at them (there are no accidents). A man borrows a motorcycle, does several wheelies, weaves back and forth in traffic, but no accidents occur.
► A man bungee jumps off a high bridge. A man and a woman are in heavy plastic body armor and helmets and body-skate down a winding mountain highway (no cars are present and the scene cuts). A man and a woman go skeet shooting.
► A man has a nightmare in which he is discovered in rigor mortis on his couch; he has a grimacing face and a fly crawls over his left eye (he wakes up with a start). We see a line of plucked chickens on hooks; a guide mentions tendons and waste and a man faints. Two scenes in an outdoor soup kitchen line show homeless people looking very dirty.
► On a TV movie we see a man about to use a hacksaw to cut off another man's leg. A band named "Munchausen by Proxy" is featured several times. A singer walks on stage blindfolded in dim lighting and sings a song about a boyfriend dumping a woman. A girl band sings, "I want to snap your neck and sit on you."
► We see an inebriated man lying face up on a bathroom floor and vomiting is suggested, although the room, the man, and the toilet are clean.

SUBSTANCE USE - One bar scene shows three young men with 18 empty cocktail glasses and wine glasses in front of them while they finish a tall cocktail each (one of them slurs his speech and snorts hot pepper sauce, pounding the table and yelling), three scenes show people drinking beer, four scenes show waitresses in a bar with trays full of beer bottles and mixed drinks, bottles of beer sit on tables in bar scenes and some people drink briefly, customers walk through a bar with cocktails and beer bottles in their hands and a few drink, alcohol is served at parties, and a man sets a glass of wine on a special mattress and jumps up and down on the bed without spilling any wine. A man drinks several cans of Red Bull energy drink, drives to a park, exits the car, several empty cans fall out, he talks very fast and seems unable to stop, and is later found face down, passed out on a jogging path.

MESSAGE - You don't have to say "Yes" to everything. 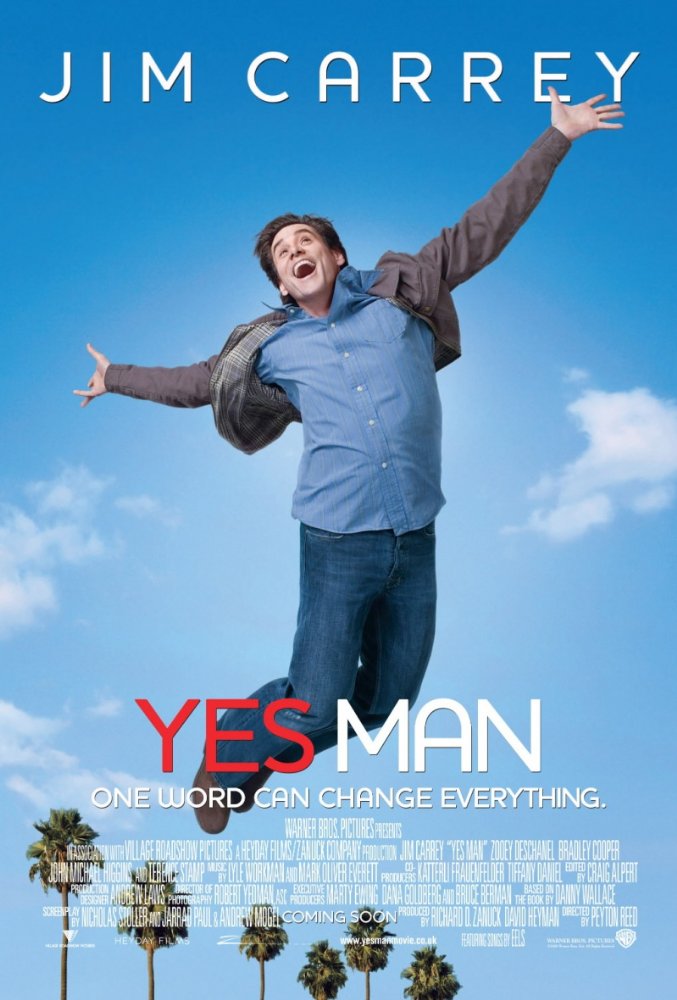