Why is “X” rated R? The MPAA rating has been assigned for “strong bloody violence and gore, strong sexual content, graphic nudity, drug use, and language.” The Kids-In-Mind.com evaluation includes several sex scenes with nudity while being filmed, a sex scene with nudity, an implied sex scene with partial nudity, a few kissing scenes, discussions of sex vs. love, several deaths by alligator attack, gunshot, being run over by a car and stabbing with bloody results, and almost 15 F-words and other strong language. Read our parents’ guide below for details on sexual content, violence & strong language. When an ensemble of adult entertainers travel to a remote rooming house to film what they term a “good dirty movie,” they are surprised by what they find and the unwelcoming reactions of the owners of the property. With Mia Goth, Jenna Ortega, Brittany Snow, Kid Cudi, Martin Henderson, Owen Campbell and Stephen Ure. Directed by Ti West. [Running Time: 1:45]

– A young man drives a van on a driveway to leave until an elderly woman stands in front of the car, he stops and tries to help her into the house (please see the Sex/Nudity category for more details), and when rebuffed the woman stabs the young man in the throat; he falls to the ground gurgling and spitting blood, the woman straddles him, pulls the knife out of his throat (blood spurts) and stabs him numerous times (blood sprays on the woman and the van and pools on the ground). A man hears a noise and looks through a hole in the wall of a barn, someone outside stabs a spike through the hole and into his eye, pulls it out (blood spurts) and the man falls dead; he is later poked with a pitchfork and covered with hay. A man is shot in the chest and falls back off-screen (we do not see the wound). A woman tries to help an elderly woman back to her house when she finds her standing on a pier; the elderly woman becomes upset and slaps the woman in the face, shoves her off the pier and an alligator bites the woman’s head and she thrashes as the water bubbles up with blood. A young woman screams and runs out of a house where she is shot and falls dead (we later see her face partially blown off and covered in blood). A young woman drives a truck over the head of an injured woman and the head is crushed and spurts blood. A young woman goes to a dark basement to find a flashlight, when she returns up the stairs she finds the door locked, she uses an axe to break part of the door open and when she reaches through the opening someone on the outside of the door hacks her hand with an axe, cutting her fingers (we see blood and a finger partially severed).
► A young woman finds a dead body hanging from the ceiling by his wrists and with his ankles shackled (we see dried blood on the body), and she screams loudly (please see the Sex/Nudity category for more details). A young woman threatens an elderly woman with a gun, she pulls the trigger but the gun is not loaded; the elderly woman shoots a shotgun and misses the young woman but is thrown out of a door and onto the ground, where she complains of her hip. A man drags a dead body into a house and the body gasps and startles the man, causing him to fall to the floor, having a heart attack.
► Traffic is stopped on a road and we see the bloody carcass of a cow on the road with blood and tissue on the grill of a truck and a man shovels the remains off the road; a car drives through a puddle of blood and we hear squishing as a young woman in the car gags (she does not vomit). Police officers are shown outside a remote house where there is a body lying outside covered with a blood-soaked sheet and a smear of blood on the floor of the porch; two officers go to the basement where they see something that alarms them (we do not see anything). A man searches for an elderly woman at night around a pond and finds a car partially submerged; he wades into water to retrieve another man’s flashlight and is startled by the man standing behind him. A young woman hides under a bed where an elderly couple has sex (please see the Sex/Nudity category for more details); she pulls herself out from under the bed and runs away unnoticed.
► A man walking barefoot in a barn steps on a nail (we hear a crunch), he falls to the ground yelling, pulls the nail out and we hear squishing and see blood on his foot. A young woman dives off a pier and into a pond where she swims and floats and we see an alligator in the reeds nearby; when the young woman swims back to the pier, the alligator follows her but she gets out of the water before it is close enough to attack her (the young woman is not aware of the alligator). A man answers his front door with a shotgun and tells a man standing on his porch, “You’re trespassing and the law says I can shoot”; he does not shoot and says that the gun is not loaded. A young woman searches through a dark house for her boyfriend and a man touches her shoulder from behind, startling her. A young woman runs away from a house and is startled when she nearly runs into a man.
► A man tells another man, “I don’t think I like you.” A young woman says, “I will not accept a life I do not deserve.” A young woman accuses another young woman of being rude for staring at her and not talking. A young man and a young woman argue about her wanting to be in a movie. A man stands in a shower and cries after filming his girlfriend having sex with another man. A song with the lyrics, “Don’t fear the reaper,” plays on a car radio during a murder.
► An elderly woman touches a sleeping young woman’s back and smears blood from her own hand on her skin. An elderly man leans over while walking and coughs deeply; he complains later of having a bad heart. A young woman goes to a house where an elderly woman was standing and waving on the front porch; she enters the house and finds many dirty dishes in the sink, something seems to be cooking on the stove and we hear flies buzzing. A coroner loads a body in a body bag into the back of a car at a crime scene.

– Being unhappy with your life can drive some people to extremes. 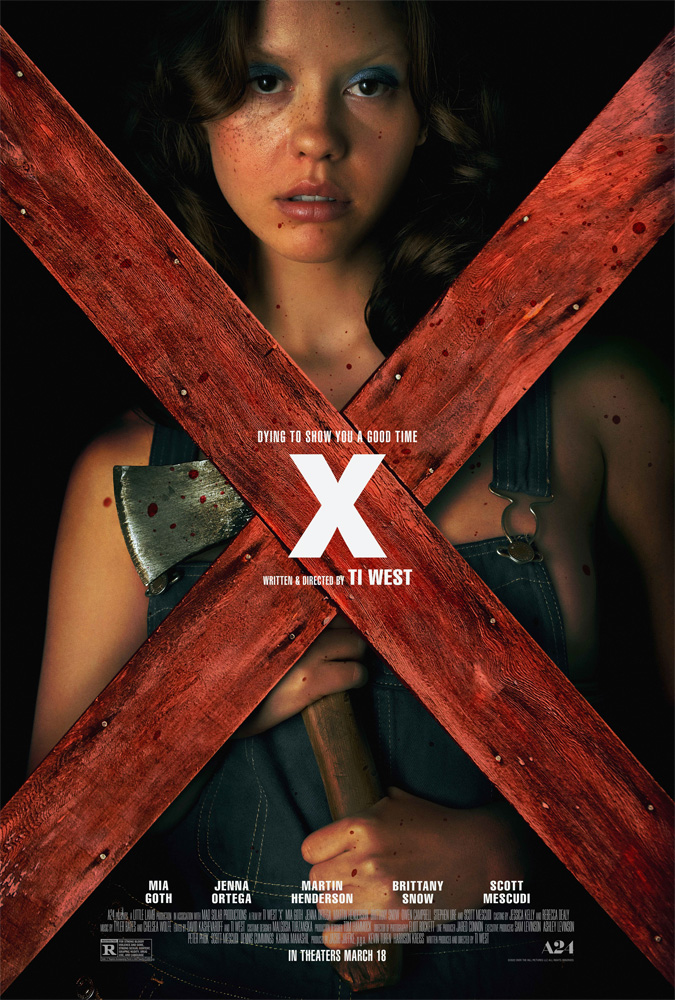