In Victorian England, the feared "Woman in Black" (Liz White) is the ghost of a woman deemed to have been an unfit mother, unable to save her son (Ashley Foster) from drowning at the hands of her sister's family. She wanders her mansion, and every time she is spotted at least one child mysteriously dies. An attorney and single parent (Daniel Radcliffe) takes on the ghost, but finds he must now fight to save his own young son (Misha Handley). Also with Ciarán Hinds, Janet McTeer, Sophie Stuckey and Alisa Khasanova. Directed by James Watkins. [1:35]

SEX/NUDITY 0 - A doctor pulls a white sheet over the staring face of a woman; we see a large, red stain on another sheet between her legs, indicating childbirth. In close-up we see a woman's pregnant belly and a man's hand (wearing a wedding ring) reaching to touch it.

VIOLENCE/GORE 6 - Several children die while in a trance-like state and all the deaths are blamed on the ghost of a woman whose son drowned: Three young girls step on their dolls and tea cups in an attic and jump to their deaths from the attic windows (off screen and we hear screams); another girl is locked in a basement room where she smashes an oil lamp onto her own feet and goes up in flames, silently; a white-faced young girl is carried into a police station where we hear she drank lye and she vomits blood and dies (we see her mother, screaming and crying outside their home); two young boys at the beach walk into the sea and disappear and we hear they died; and a four-year-old boy walks to the edge of a train platform, jumps down and walks on the tracks toward an incoming train (his father jumps in to save him and they both die, but we see no injuries and they are shown walking away in an afterlife).
► A man cleans a dead boy's corpse, he wraps it in white on a nursery bed, places a rosary on the body, surrounds it with the boy's old birthday cards when candles go out, wind blows, a rocking chair rocks by itself, a ghost slides across the floor and screams loudly like a banshee into the face of the man and he falls to the floor as the ghost vanishes.
► Throughout the film, a woman's ghost wears a long black taffeta dress and a long veil that hides huge gaping eye sockets in her stark white cheeks and her eyes are sunken in the manner of a skull: the ghost stands in dark corners, in a graveyard of a mansion, in mud beside a tall cross marking the spot where a young boy drowned, at the end of dark hallways and in mirrors; her face appears at the windows of an empty house and behind an unsuspecting man several times and in one scene she jumps from a chair with a white rope around her neck, reenacting her suicide hanging; also the ghost glides in and out of frame numerous times, silently and quickly, we hear loud noises several times somewhere in a distant room and one scene features loud noises coming out of fog (including horses neighing, men and woman shouting and a child screaming).
► Several scenes feature zombie-like children standing in the middle distance in graveyards or on town streets, staring at the camera, white-faced and in tattered, muddy clothing. A man sees the ghost of his wife in a muddy graveyard several times (she is wearing her wedding dress and is surrounded by a golden glow as she walks away). A man sees a ghostly woman dressed in black several times. Off screen, we hear children shrieking several times. A raven screams and flies across the screen twice. A decayed corpse stands at an angle to the camera; the head turns and shining eyes gleam at the camera as the scene ends.
► A young girl spits up a large amount of blood. A doctor pulls a white sheet over the staring face of a woman; we see a large, red stain on another sheet between her legs, indicating childbirth. In a flashback, we see a closed door and hear several long, loud screams; the door opens and a nurse hands a wrapped baby to a man as a doctor tells him that his wife died in childbirth.
► Two men spend a night inside a seaside haunted mansion, they dig up a boy's body from the oozing mud at low tide and one of the men sinks into the mud twice; the other man pulls the man out of the sand by a rope tied to a car. Two men bury the body of a boy in a grave where we see a rotting yellow skeleton with gaping mouth and the men pull back at the terrible smell.
► A woman enters trances several times and performs automatic writing; she speaks simultaneously in her own voice and her dead young son's voice, carving crude stick figures into a tabletop with a dinner knife and a gravestone with a rock. A message appears on a wall, written in blood: "You could have saved him."
► In several scenes a man goes through a dead woman's papers and we hear footsteps, pounding, music, creaking noises, and air in pipes, and we see cobwebs and shadows; windows and doors rattle, a hand slaps a glass pane in the bathroom door from the inside and a man finds a long trail of muddy footprints leading from the front door to an upstairs nursery.
► A dark nursery room scene is full of sideshow windup toys that move without warning (cymbal-clanging monkeys, broken but dancing dolls and a strange zoetrope picture lamp); old taxidermy monkeys rot on shelves. A man travels to a deserted estate in heavy fog across a mud-covered causeway and he has several arguments with townspeople who want him to stay away from a mansion.
► We see a newspaper ad for séances with Arthur Conan Doyle and prints of scenes of witchcraft trials.

SUBSTANCE USE - A man and a woman drink a few whiskeys in a pub and a couple of bottles of liquor are seen behind the bar, a man in a haunted house drinks several short glasses of whiskey, two dinner scenes show glasses of wine that men and women drink and two men drinking brandy beside a fireplace.

MESSAGE - Revenge is a powerful force. 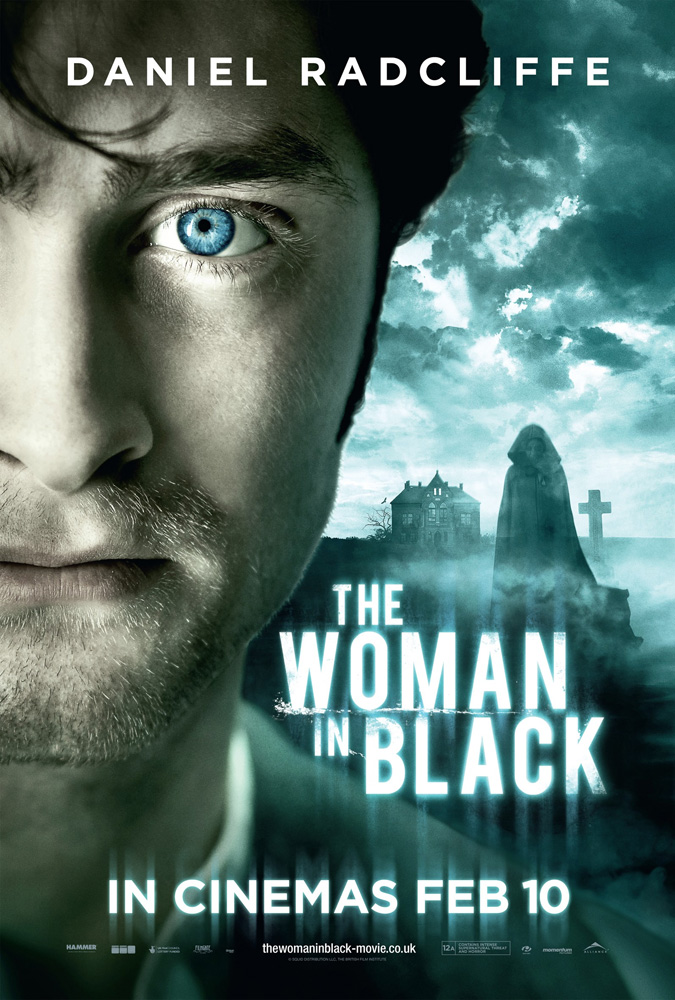