A remote base is in Antarctic is threatened by a huge storm and must evacuate. As the storm approaches though, a body is discovered on the ice and the base's Marshal (Kate Beckinsale) must sort out the details of what happened. Also with Gabriel Macht, Tom Skerritt, Columbus Short, Alex O'Loughlin, Shawn Doyle and Joel S. Keller. Directed by Dominic Sena. [1:41]

SEX/NUDITY 7 - Several nude men run through snow (bare chests, legs and penises are visible). A woman undresses down to her underwear (cleavage, bare abdomen, legs and part of her bare buttocks are seen), she takes off her bra (her bare shoulders are seen), gets into a shower and we see her flesh silhouette through the steamed-up glass. A man looks at a pornographic magazine (we see bare breasts, nipples covered by arms, bare buttocks, back and legs). Later, another man looks at the same magazine.
► A man stands bare-chested with a towel around his waist and says to a woman, "Don't you owe me a strip search?" A man helps a woman to button her sweater.

VIOLENCE/GORE 8 - A woman opens a body bag with remains inside (we see the bloody body and the wounds and hear squishing as she searches the bag); she then opens another bag, cuts away autopsy stitches, lifts the skin and pushes her hand in the opening (we hear squishing and tearing). A body is examined on a lab table: we see bloody wounds on the head, the chest and a stitched wound on the leg while two people discuss what might have lead to his death. We see a dead body on the ice (we see blood and splatter), a man and a woman turn the body over and it creaks; when the body is turned we see that half of the man's head is missing and his limbs are twisted. We see a dead man on a sofa with bloody throat wound and abdominal wound. Several dead and frozen bodies are found (we can see bloody gunshot wounds on a few of them and one with the front of the head blown off).
► A man is found with a bloody wound on his throat, he gurgles and blood spurts, another man comes behind a woman and swings an ax at her, missing and striking the wounded man in the abdomen (more blood).
► A man is shot in the head on an airplane, other men draw guns and shoot at each other: a man is shot and wounded (blood spurts), a man is shot in the chest (we see bloody holes in his clothing), the pilot is shot (blood and matter are blown onto the windshield) and a window is shot out, the plane loses altitude and dives toward the ground, striking a mountain top and crashing (all passengers and crew are dead).
► A man is stabbed in the back with an ice ax, he crawls out a door and through snow that is stained with blood, and the attacker follows, grabs the man's head and twists it breaking his neck. A woman's head is slammed into a mirror (we see her with blood on her forehead and mouth) and she struggles against her attacker. A man is struck in the head and stomach twice with a shovel.
► A man is shot, and he breaks through the window of a high-rise and crashes onto the ground (we see his body hit and splatter). We see a man falling from the sky and we see his twisted body after he hits the ground. A wounded man lies on a floor with a large, bloody abdominal wound (he breathes heavily).
► A doctor amputates a woman's two fingers; we hear a snip and see the woman twitch when the first finger is taken off and we later see the stitched stumps. A woman grabs a metal hatch crank and after turning the frigid metal tears away the skin on the inside of her hand (we see the skin pulling away). A woman unwraps bandages from her hand and we see two blackened fingers; a man pokes at them to test for feeling, (we see the needle poking the skin) there is none, and he tells her he must amputate.
► Three people go outside during a large storm, they are thrown by the wind, one man is struck by blowing debris (he's OK), one person strikes another with a bladed object, two men fight with punches and kicks, their safety ropes are cut and one person slams into two pylons (he disappears in the thick snow but is presumably dead).
► A man accidentally stabs himself in the leg with an ice tool (we see blood spurting and this scene is shown several times). A woman holds cutters on a man's finger and threatens to cut it off (we see a trickle of blood but she does not cut).
► A man with an ax swings at a woman as she runs away from him. A woman holds a gun on a man. A man with a knife stands in a room with a woman and seems threatening. A woman thrashes in her sleep and strikes a man in the chin when he tries to wake her.
► We see a man in a hospital bed with bandages on his abdomen. A man's nose bleeds when in an airplane.
► A woman falls into a hole in ice and through an opening that has blood on it (she's OK). Three people are trapped 15-20 feet under ice and talk about running out of air (they get out OK). A woman throws things off her desk and kicks a chair in frustration.
► A man walks out into a fierce snowstorm with no protection (he presumably dies). A large storm blows toward an observation base and people scramble to evacuate. We see several men outside in frigid winds shivering and turning blue while a man talks about the extreme temperatures and whiteout conditions.

SUBSTANCE USE - Several men share a bottle of vodka, a man takes a bottle of scotch out of a secure area, and a man drinks two shots of scotch.

MESSAGE - Being secluded in extreme environments can lead people to do things you would not ordinarily do. 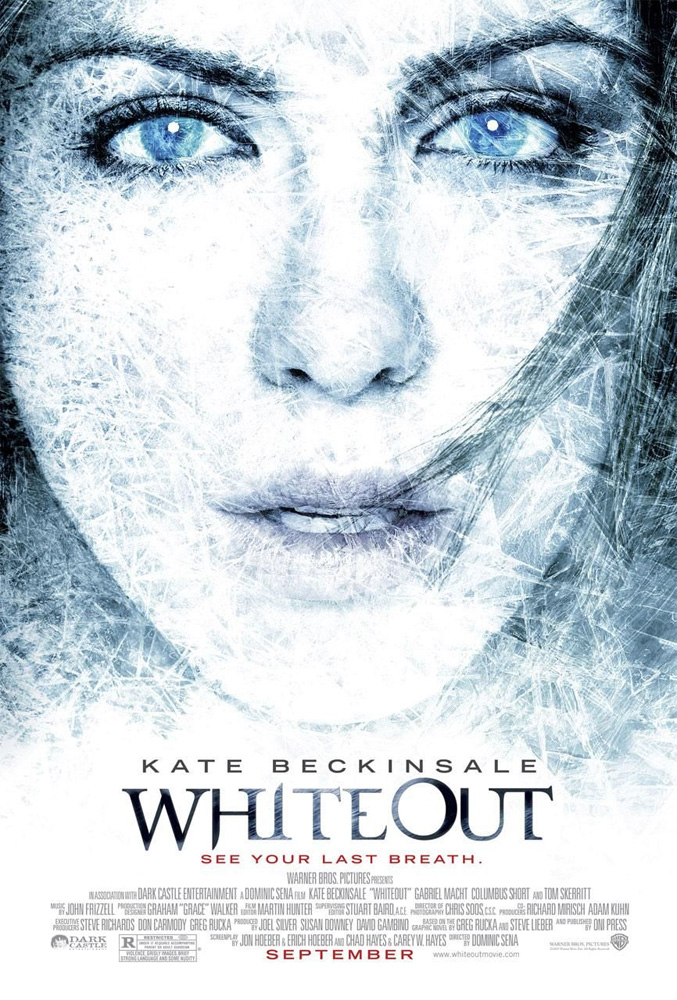