Why is “The Wasp Network” rated TV-MA? The TV Parental Guidelines Monitoring Board rating indicates “This program is specifically designed to be viewed by adults and therefore may be unsuitable for children under 17.” The Kids-In-Mind.com evaluation includes a couple of implied sex scenes with topless nudity, a few kissing scenes, cleavage revealing outfits, several scenes of bombings of buildings that leave people injured or dead, two American planes shot down by Cuban planes, discussions and evidence of illegal drug trade, many arguments, and 5 F-words and other strong language. Read our parents’ guide below for details on sexual content, violence & strong language. Based on true events: From 1991-1999 several Cuban nationals, including a war hero (Edgar Ramírez), infiltrated Miami’s anti-Castro organizations, blew up buildings, dropped supplies to defectors on rafts near Florida, and smuggled drugs. Both American and Cuban intelligence networks intended to stop them. With Ana de Armas, Penélope Cruz, Wagner Moura and Gael García Bernal. Directed by Olivier Assayas. Several lines of dialogue are spoken in Spanish and Russian with English subtitles. [Running Time: 2:03]

– A husband pulls off his undershirt and climbs on top of his wife in bed (she wears a thick, closed robe ending at her knees); he lies between her legs and we see her underwear briefly as they kiss, she flips over on top of him, rips off her robe and we see bare breasts as the scene ends (sex is implied). A woman dances suggestively near her husband who is sitting in a straight chair; she sits in his lap, and then he carries her upstairs into a hotel bedroom, out onto a porch, and lays her on a couch as the scene ends (sex is implied).
► A bride and groom kiss briefly. A man and a woman kiss briefly in two scenes and they hug briefly in three other scenes and in one of the scenes, they both cry as they hug.
► A man and a woman flirt, smiling and giggling at each other; they later date and marry. A woman says that she is pregnant and we see her about a year later with a baby.
► A man sits in a chair wearing only underwear (we see his bare chest, shoulders, abdomen, thighs and knees). A shirtless man is seen in a shower from the hips to his head and he steps out of the shower wearing a long towel around his hips (we see his bare chest, back, shoulders and abdomen). Two scenes show a man wearing mid-thigh length shorts that reveal his lower thighs. Two men wear long shorts that reveal lower thighs. Four women wear strapless floor-length gowns that reveal bare shoulders and cleavage. Several women wear dresses, including one wedding dress, with shoulder cutouts, and a women in two scenes wears a square neckline that reveals cleavage. A woman wears a miniskirt. A woman wears a clingy top through which we see the outline of her nipples.

The Wasp Network SUBSTANCE USE

– An agent cuts open a brick of drugs and we see white powder, and a woman swallows a large unknown tablet of medicine at bedtime. Men and women at a wedding sip from glasses of wine in a toast, a bar scene shows several men and women holding tall colorful drinks as they dance in a crowd, two men and a woman each drink a Tequila shot in a home, a man drinks from a small glass of wine at a restaurant counter, a man removes a bottle of beer from a refrigerator and drinks from it in a couple of scenes, two men sit on a concrete step and each drink from a beer bottle, two men each at cafe tables drink from beer bottles or glasses of beer, a man at a café has a glass of wine, and a man and a woman in a restaurant sip from large cocktails. A man smokes a cigarette in an apartment, a man smokes a cigarette in a hotel lobby and puts it out in an ashtray, a man smokes a cigarette in an office, and three men smoke cigars in house.

– Many infiltrators into anti-Castro groups in the 1990s were captured and Fidel Castro remained in power. 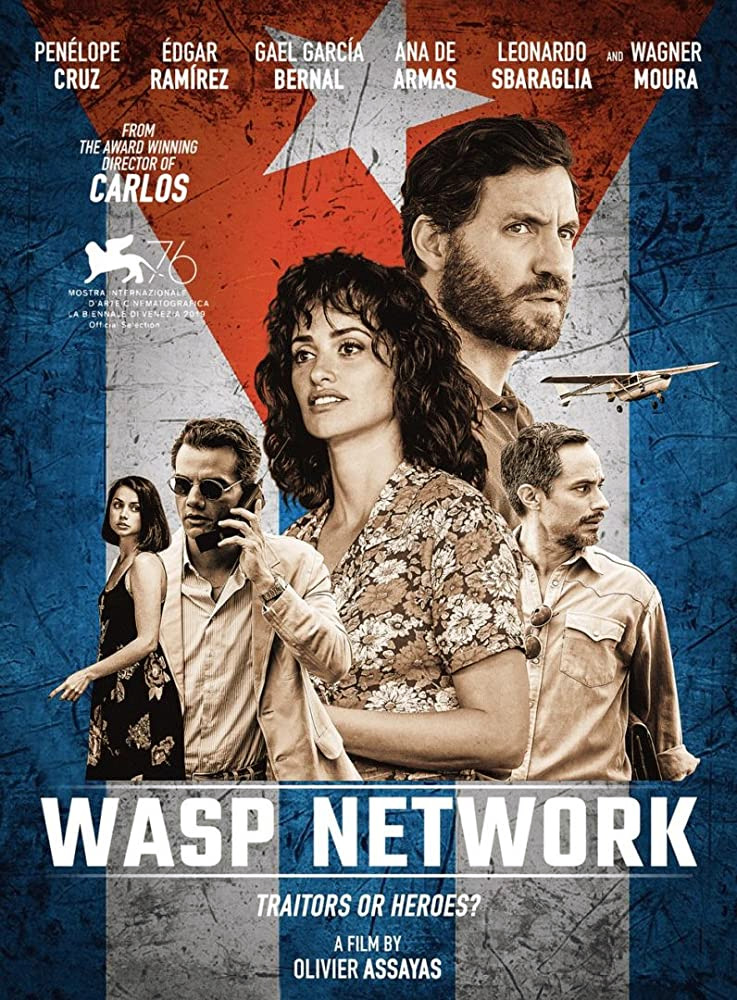