Why is “The Vast of Night” rated PG-13? The MPAA rating has been assigned for “brief strong language.” The Kids-In-Mind.com evaluation includes references to a woman becoming pregnant out of wedlock, and a few scenes of women wearing cleavage-revealing outfits, many discussions of unusual occurrences implying extraterrestrial activity, discussions of illness caused by exposure to radiation and the disappearance of a child, some arguments and panic, and at least 1 F-word and other strong language. Read our parents’ guide below for details on sexual content, violence & strong language.” In a small New Mexico town in the 1950s, a teen (Sierra McCormick) that works as a switchboard operator and a young man (Jake Horowitz) who’s the radio station DJ, are intrigued by a strange audio frequency. Deciding to investigate, they begin to suspect that the origin may be extraterrestrial and it may also have been encountered decades earlier. Also with Gail Cronauer, Cheyenne Barton, Gregory Peyton and Mallorie Rodak. Directed by Andrew Patterson. [Running Time: 1:29]

The Vast of Night SEX/NUDITY 1

– A woman talks about falling in love with a man and conceiving her son out of wedlock; the man did not stay with her and she was shunned by the other townspeople. A man teases another man about the other man never getting another date.
► A teen girl is shown wearing a nightgown and robe and complains when a man comes into her home; the man says, “I’m not interested in seeing you in your nightgown.” Women wear low-cut dresses that reveal cleavage in a few scenes.

The Vast of Night VIOLENCE/GORE 3

– A man, a teen girl and her young sister ride in a car with a man and a woman; the man and the woman seem to be overtaken by something and they look up toward the sky causing the driver to swerve on the road and nearly crash into an oncoming vehicle, and the teen girl rushes into woods where she falls to her knees crying. A man and a teen girl see charred ground and trees in a forest, then see a hole in the upper story for trees. A man, a teen girl and a young child are seen in a clearing and they see lights in the sky, and a large vessel is shown with a smaller vessel moving toward it; we then see a tape recorder they were carrying in a pile of ash on the ground, implying that they were taken by extraterrestrials (we do not see what happened to them).
► A teen girl rushes into a house where her young sister is crying in a crib and runs outside with her. A teen girl steals a bicycle and a man steals a car and they race around a town trying to track down what is causing a noise over the radio and through phone lines.
► A woman calls a switchboard in a panic and the operator hears the woman reporting something in the sky over her land before the line goes dead. We hear whirring on a tape recorder and the power goes out in a radio station; the man and the teen girl inside run outside and the girl runs to the switchboard where she receives many calls about something seen in the sky.
► A man on the telephone talks about experiences he had while serving in the military and that because he is black he was made to take part because no one would believe him if he told them about it; he describes underground labs and something buried in the ground and the strange sounds that he heard. A woman talks about her son disappearing when he was young and pleads with a man to take her to see what took him. A woman describes an incident with a train stopping on the tracks and when it was discovered it was completely empty with no evidence of what happened to its occupants; one woman from the train eventually was found battered and she muttered an unknown language in her sleep. A woman talks about her infant son making strange sounds in his sleep and that he fixated on objects; she says that she feared it was, “Something from the occult.” A woman says that no one ever believed her about her son’s disappearance and that they accused her of murdering him. A woman reads words in an unusual language and says that her young son was repeating these words before he disappeared. A woman says that extraterrestrials “play with people’s minds, cause nations to go to war,” and that, “Free will is impossible with them up there.” A man describes getting very sick after exposure to radiation and that he developed a lung condition. A man talks about something flying higher than anything can fly. A man says that he thinks, “We’re being spied on, or we’re about to be invaded.” A man and a woman argue in a car. A woman says that a truck spilled a load of avocados all over a road. A reference is made to a mouse being eaten by a possum. People talk about squirrel biting through a power line and the squirrel died. A woman talks about finding animal bones and a bat skull in a room in a school. A comment is made about a dog being electrocuted. A comment is made that a basketball team, “Beat us like a drum.” A man tells a man on the phone that they do not allow any swearing on the air (before a radio interview). A man says, “I hurt girls’ feeling all the time.”

The Vast of Night LANGUAGE 5

The Vast of Night SUBSTANCE USE

– A man smokes cigarettes frequently including outside a school and inside a school gymnasium, a man gives a teen girl a cigarette that she holds but does not smoke, and a man a smokes outside a radio station.

The Vast of Night DISCUSSION TOPICS

– Extraterrestrial encounters, disappearance of children and people, fear of the unknown, technological advances.

The Vast of Night MESSAGE

– Sometimes the quest to discover answers may yield more than is expected. 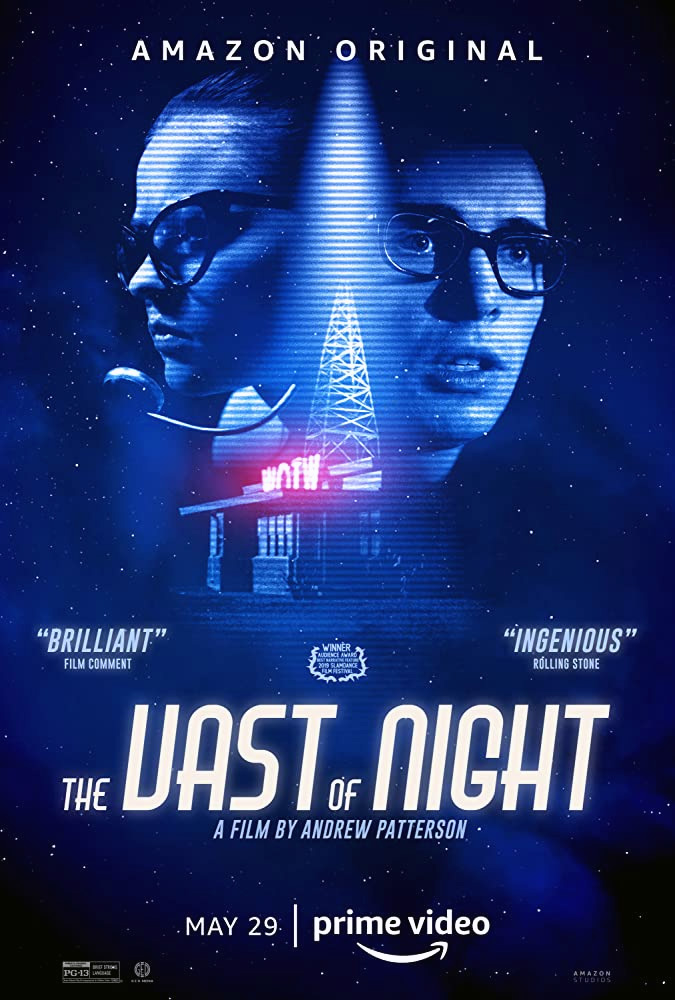