A film adaptation of Walter Kim's book "Up in the Air," about a corporate downsizer (George Clooney), who constantly travels around the country from one assignment to another. He is confronted with the lack of purpose and companionship in his life when his company grounds him and he no longer has to spend 320 days a year in the air. Also with Vera Farmiga, Anna Kendrick, Zach Galifianakis, and Jason Bateman. Directed by Jason Reitman. [1:49]

SEX/NUDITY 6 - A man and a woman discuss SkyMiles for airline travel, using it as a thinly veiled euphemism for sexual organ size and sexual fulfillment, and the woman says that she is being turned on by their discussion, which soon turns to implying that they previously had sex while in an airplane bathroom.
► A fully nude woman (her bare buttocks are visible, as well as a portion of her bare chest when she turns to the side) walks toward a bare-chested man lying on the floor of a hotel room, she lies down on a bed and they discuss how they had sex on various pieces of furniture in the hotel room. A woman wears a cleavage-exposing, low-cut dress. A woman wears a dress with a low-cut back, exposing half of her bare back. An overhead shot of a shirtless man (bare back visible) swimming in a pool is seen. As a man is waking up in a bed, we see a portion of his bare chest; he sees a woman putting on a dress (exposing cleavage), standing beside the bed, they talk about how her leaving might make the man feel "cheap" and that the woman should leave money on the nightstand before she leaves and she kisses him. A woman is wearing a man's dress shirt (we see her upper thighs).
► In a text message conversation which we see, a woman (seen lying on a bed wearing a robe) tells a man to masturbate; the man (seen lying on a different bed wearing a robe) responds that she should also masturbate, the woman responds that she "already has" and the man responds that "the next time" she should call him so he can "listen." During a phone conversation, a woman tells a man not to worry about not contacting her, explaining that she is simply him with a part of the female anatomy. A man asks a young woman if she had awoken a young man before she left his room in the morning (sex is implied), or if she had simply slipped out, saying that it would make the man feel cheap (using a crude term for a prostitute). A woman tells a man, "Call me when you get lonely," the man says, "I'm lonely," and she walks away. In reference to a photo of a man holding a woman in his arms, a woman comments that the man and woman in the photo will "make" cute kids. A young woman acts shocked when a man tells her that he will only have casual relationships. A man jokes to a woman that he is giving her a "key to his place" and hands her a hotel keycard. During a phone conversation, a woman tells a man that their sexual relationship had been an "escape" from normal life. A man says that children love athletes because they "screw lingerie models." A young woman tells a man that he is only interested in "peeing on everything," using a crude term for erections, and then states that men are always trying to compensate for not being able to have children. A young woman tells a woman that she should "try women," she laughs and says she had and that it did not work out. A woman asks a man if he had previously "fooled around with" a teacher, and the man asks the same of the woman; she replies, "not until college."
► A man and a woman are seen kissing passionately on a sofa. A man and a woman kiss passionately. A man and woman kiss. A woman kisses a man. A man and a woman kiss. A man looks longingly into the eyes of a woman and kisses her. A man tells a woman that he used to "make out" in the stairwell in his high school and the two are later seen kissing in the same stairwell.
► A woman helps a man button his shirt (no nudity seen) while the man playfully grabs the woman's waist. A young woman sleeps with her head on a man's shoulder. A man holds a woman in his arms as they sleep together.
► A young man and a young woman dance closely. A woman rubs her hips across a man's hips while dancing with him. A man and a woman dance hand-in-hand, holding one another closely. A man and a woman dance closely, and then hug.
► A man and a woman walk into a hotel room together, presumably to have sex.


VIOLENCE/GORE 2 - A man shouts at another man. Using multiple obscenities, a man shouts at a young woman and a man, stands up, knocks over a chair and storms out of the room. In pantomime, a man and a young woman get in a loud argument and the man then shouts at the young woman saying that he will sue her.
► We see a montage of a man cocking an assault rifle, laughing manically and shoving objects off a desk, as another man states in a voice-over that some people go "crazy" when they are terminated.
► A woman says that she is going to kill herself by jumping off the nearest bridge; a young woman becomes upset, a man says that "no one goes through with it" and we hear later that the woman did, in fact, kill herself. A man tells another man that losing his job was similar to having a death in the family. A man thinks that a woman asks him if he would like "cancer"; the woman corrects him, but he appears to be slightly upset. A man says that the act of terminating a person's employment is brutal but that he helps ease the process and another man says that it is like "stabbing a person in the back, rather than in the chest." A man says that he "ferries the wounded souls across a river of dread," "or I shove them in when it will affect them as little as possible." A man shouts at a young woman, saying that he will no longer be able to afford the medicine for his daughter, who is suffering from asthma. A man tells a crowd, "the slower you are, the faster you die." A young woman says that she can defend marriage because it will prevent people from "dying alone" and a man responds that everyone will die alone. At airport security a man says "old people are the worst, littered with random metal and don't value the time they have left"; he then points to men who look of Arabic descent and says, "These will be selected for random security checkpoint," a young woman tells the man that he is "racist," and the man explains that he is simply "stereotyping."
► A man points out a stairwell in his old high school, where he had gotten in his first fight, and was beaten up. A man weeps openly after being terminated.
► A man tells another man that he had defecated for the first time in two weeks and that it "felt good."

SUBSTANCE USE - A woman asks another woman if she would like a Xanax and a man interrupts and says that a Xanax is not going to help the woman. A flight attendant hands a man a drink, a man in a bar has a drink and watches a woman nurse a drink, two women are sharing a drink with a man, a bartender hands a man and a woman a drink, a large crowd of people are seen drinking alcoholic beverages at a party, two men drink at a bar, a young woman drunkenly hangs onto a man, a young woman drunkenly sings karaoke while a man holds a bottle of beer and watches her, a young woman apologizes for her drunken behavior, a man opens a refrigerator to reveal a shelf full of small bottles of alcohol, and a man and a woman are shown with glasses of champagne.

MESSAGE - You cannot live with nothing and nobody -- everyone needs friends and a family. 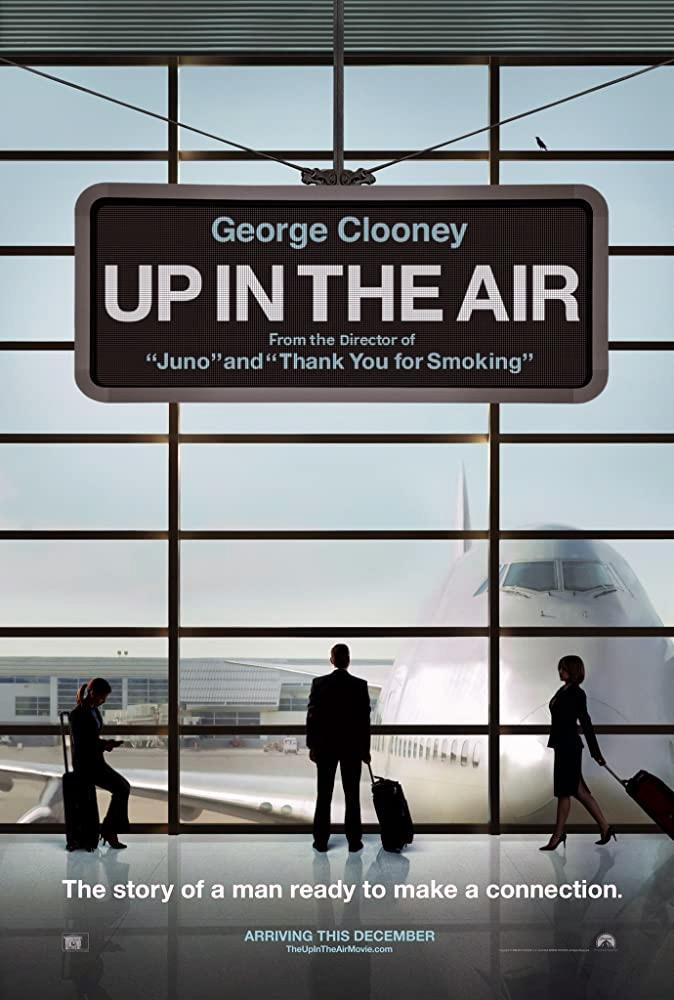