An alien (Scarlett Johansson) entices men to follow her to remote places for sinister reasons. Also with, Jeremy McWilliams, Lynsey Taylor Mackay, Dougie McConnell, Kevin McAlinden, D. Meade, Andrew Gorman and Paul Brannigan. Directed by Jonathan Glazer. Some of the dialogue is indiscernible with no subtitles. [1:48]

SEX/NUDITY 9 - A woman leads a man through a dark gate and into a dark room where she removes her coat and top and he takes off his shirt (we see her wearing a camisole and he is bare-chested); she steps away from him and he removes his pants (we see him wearing jockey shorts) and then his underwear (revealing his bare buttocks and erect penis) as he continues to walk toward the woman and she is shown wearing a bra and jeans (please see the Violence/Gore category for more details). A man is shown bare-chested and dancing while a woman is shown wearing a bra and panties; the man moves toward the woman and removes his pants revealing his bare buttocks and erect penis (please see the Violence/Gore category for more details). A man follows a woman through a dark doorway and up a flight of stairs into a dark room; the woman is shown wearing a bra and panties, the man is shown bare-chested, and the man is then seen fully nude (bare buttocks and genitals are shown) and the woman is shown fully nude (bare breasts and pubic region are seen).
► A fully nude woman undresses the dead body of another woman (the bare breasts, abdomens, buttocks, backs and legs of both women are shown and the shadowed pubic region of the first women is seen). A fully nude woman looks at herself in a mirror (we see her bare breasts, buttocks, abdomen, back, legs and the pubic region is in shadow). A fully nude man (bare chest, abdomen, buttocks and genitals are seen) walks through tall grass and climbs through a fence (please see the Violence/Gore category for more details). Two fully nude men are shown under the surface of a pool and we see their bare chest, abdomen, buttocks and genitals. Several women are shown wearing low-cut dresses that reveal cleavage and bare shoulders in a night club. A woman wears low-cut tops that reveal cleavage in several scenes.
► A man and a woman kiss in bed, he lies on top of her and kisses her neck and chest, then removes her pants (we see her bare legs) and her panties and he moves between her legs (we see his bare buttocks); he seems to be trying to have sex and she stops him, moves to the edge of the bed and shines a light between her legs (she seems to be looking for something) and he seems confused.
► After a woman entices a man to join her in her van, she asks him when he last had a girlfriend, then if he wants to look at her and when was the last time he touched someone; she takes his hand and presses it to her face, and he then strokes her cheek and neck. A man and a woman hug while dancing in a nightclub. A man compliments a woman on her appearance.
► A woman falls asleep in a shelter in a thick forest and wakes up to find a man molesting her (we see his hand caressing her clothed leg and some other movement (please see the Violence/Gore category for more details). A woman stands in a room (fully clothed) and a man stands behind her, then moves around her and then moves very close to her face before leaving. A man picks a woman up and carries her across a deep puddle of water and then puts her down on the other side.


VIOLENCE/GORE 6 - A woman swims into rough waves near rocks to rescue her dog that seems to be stuck in heavy undertow and we see the dog disappear under the water's surface, and the woman as well when her husband struggles to reach her; another man pulls the husband to the shore, but he goes back in and does not come back out leaving their young child crying on the beach (we see the baby again later in the dark and continuing to cry on the beach). A man pours gasoline on the ground and splashes some on the back of an alien being; he lights the liquid and the alien runs, fully engulfed in flames, before succumbing and falling to the ground (we see a pile of embers on the ground).
► A man falls on a beach, exhausted after trying to rescue a man from a heavy undertow; a woman stands over him, strikes him in the head with a rock (we hear the thud) and then drags him off the beach and into a van.
► A man walks down a hill at the side of a road into the dark and returns carrying a woman's dead body, he places the body in a van and we see a woman undressing the body (please see the Sex/Nudity category for more details). After a fully nude man climbs through a fence another man approaches him, presumably killing him and we then see the man's body being put in the trunk of a car (no attack or injuries are shown).
► After a man follows a woman into a dark room we see him walking into what looks like a pool of liquid and then disappears under the surface; we see the man floating under the surface and we see another man whose flesh is bloated and loose, the second man reaches for the other man and touches his hand before he pops and his flesh (it looks like a snake skin) billows in the liquid. After a man follows a woman into a dark room, we see him walking into what looks like a pool of liquid and he then disappears under the surface (presumably dying) as the woman leaves.
► A woman wakes up in a shelter and finds a man molesting her: she shoves him and runs out into a thick forest where she hides and then runs again; she finds a truck parked on a roadway and gets inside before seeing her attacker walking toward her, she runs and he chases her, then tackles her and pulls her clothing off as she struggles against him; she manages to get away and the man looks at his hands to see black liquid and he runs away. Several young men surround a woman sitting in a van, she rolls down the window and they shout at her and pound on the van; one young man jumps on the hood and another spits on the window before the woman drives away. A woman in a van entices a man to join her and the next scene shows her alone in the van (implying that the man has come to an untimely demise).
► A woman peels an outer dermis off to reveal an alien being (humanoid with black flesh). A stream of sludge flows through a passage way (it is not clear what it is, but it could be the organs and remains of people). A woman finds blood on her hand after a man hands her a rose; we see the man wrapping his bloody hand with a cloth. An extended introductory sequence ends with a close-up of an eye. A young man is shown to have facial deformities. A woman walks along a roadway and into a dense fog where she stands for a while.
► A woman trips and falls on a sidewalk and lies face down on the ground before two men help her up (no injuries are seen). A woman stares into a mirror in an extended sequence.
► We hear a news report about a man's body having washed ashore and that his wife and child are missing.
► A woman in a restaurant takes a bite of cake, and then gags and spits it out; other diners appear concerned.


LANGUAGE 5 - A couple of possible F-words [very thick accents and use of unfamiliar regional terms make it very difficult to discern specific words].

SUBSTANCE USE - Men and women in a nightclub are shown holding drinks and drinking alcoholic beverages. A man smokes a cigarette while walking along a street, and several people smoke cigarettes while standing on a sidewalk and talking.

MESSAGE - Be careful who you get in a van with. 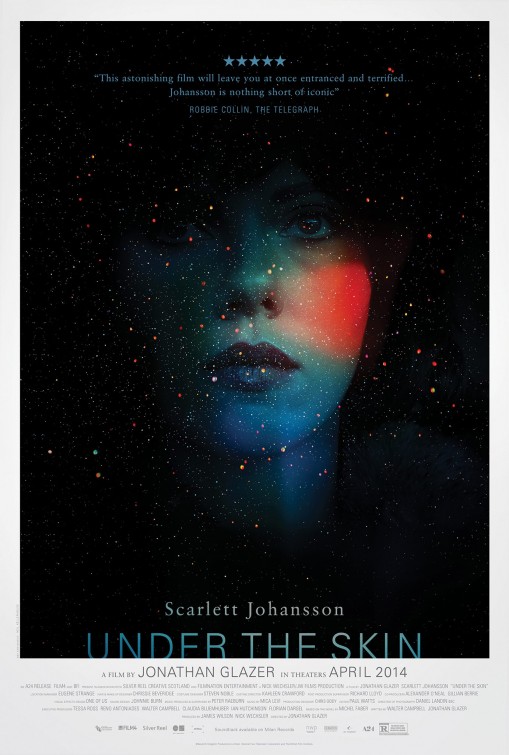