Nick Cannon stars as a young-looking police detective assigned to go undercover on a private high school campus to find information about the death of a student there, despite the fact that his captain considers him to be a loose cannon. While trying to dig up clues he uncovers a highly organized international auto-theft ring. Also with Roselyn Sanchez, Shawn Ashmore, Cheech Marin and Kelly Hu. Directed by Marcos Siega. [1:35]

SEX/NUDITY 4 - A topless woman on a beach sits up and covers her bare breasts with her arms (we see her cleavage), a woman's top is low-cut and reveals cleavage, a woman wears a low-cut top that reveals cleavage in several scenes, a woman wears a low-cut and short top that reveals cleavage and bare abdomen, and a young woman takes off her bikini top as inspiration for two men who are about to race (we do not see her breasts). We see beach side scenes of women in bikinis (revealing cleavage, bare abdomens, bare thighs and part of bare buttocks) walking and rollerblading. Several young women wear bikinis at a pier. A young man's pants are pulled down revealing his boxer shorts. A young man admires young women wearing short skirts as they walk by.
► A woman kisses a young man.
► A young woman talks about having sex, a young man (he's an undercover detective) flirts with his teacher, and a young man prays for "hot young ladies all night" before a basketball game.
► A camera focuses on a young woman's hips as she dances. Two young women dance suggestively around a young man. Young men and young women dance together at a party.
► A young man grabs another young man around the thigh in a rugby huddle and the one being grabbed reacts as if he is making a sexual advance. A young man makes a joke about prison rape.


VIOLENCE/GORE 5 - Three men shoot at a police officer, he shoots one of them in the leg (we see the wound), another man runs, and the officer chases and slams him into a pile of garbage bags.
► A man speeds away on a boat, a young man jumps onto the back of the boat, is dragged in the water, climbs onto the boat, punches the man repeatedly (he ends up with a bloody nose), the boat almost runs into another boat, and the young man is hit with a pole; the other man is knocked back and impaled on a pointed pole (we hear a crunch) and the boat crashes into a crane and the young man jumps into the water as the boat explodes.
► During a drug bust, the suspects escape by speeding away in a truck, while a police officer holds onto the back of the truck and is pulled along on a skateboard; he is thrown off the skateboard, he takes a 4-wheeled vehicle and continues to pursue the truck driving through a market (stalls are knocked down), and two other police officers on bicycles try to give chase too, but they fall off their bikes, although one officer shoots the tire of the truck it flips on its side and explodes.
► Several people shoot back and forth at each other, a police officer is shot (we see blood on her arm), another officer is shot in the leg, and a man is shot in the crotch with a nail gun.
► A young man shoots the tire out of a car, it crashes into a pole, a man pulls a woman out of the car and uses her as a shield, and the woman is shot in the shoulder with a paintball gun and the man runs away. A grenade launcher is fired and hits a car that explodes, and a man's sleeve catches fire.
► Several young men play paintball, one is shot in the face (he's wearing a face mask), one is shot in the stomach and another is shot in the chest.
► Two young men race on jet skis, one speeds over a ramp and is thrown off into the water. A young man drives a car fast and recklessly through traffic, he drives between two oncoming trucks, drives into a warehouse and men shoot at him, and he shoots back with a paintball gun.
► Two young men shove each other, several punches and kicks are exchanged and one punches the other in the nose. Two young men shove each other and insult each other, as well as a young woman over whom they are fighting. Young men shove and slam each other on the rugby field: one is punched in the face and one is pushed back onto a drink table and it collapses. A young man is hit hard and lands on the ground. A man holds a man by the neck and squeezes.
► A man and a woman are shoved into a car and they are held at gunpoint. We see a car being stolen by two masked people -- a few other cars are stolen in different scenes (one car is stolen and a young man chases on foot).
► We hear that a student was found dead. A young man talks about his father having died.
► A police captain yells at an officer. Young men argue and shove each other on a basketball court in several scenes.
► A man holds a jar filled with urine. A man flatulates and is presumably going to the bathroom behind some bushes. A young man burps loudly.

SUBSTANCE USE - A man has a bag of drugs and there are discussions about drug dealing and a drug called "Bliss." High school age young people are shown drinking alcohol in several party scenes.

MESSAGE - Education makes you a better person and is the key to making something of yourself. 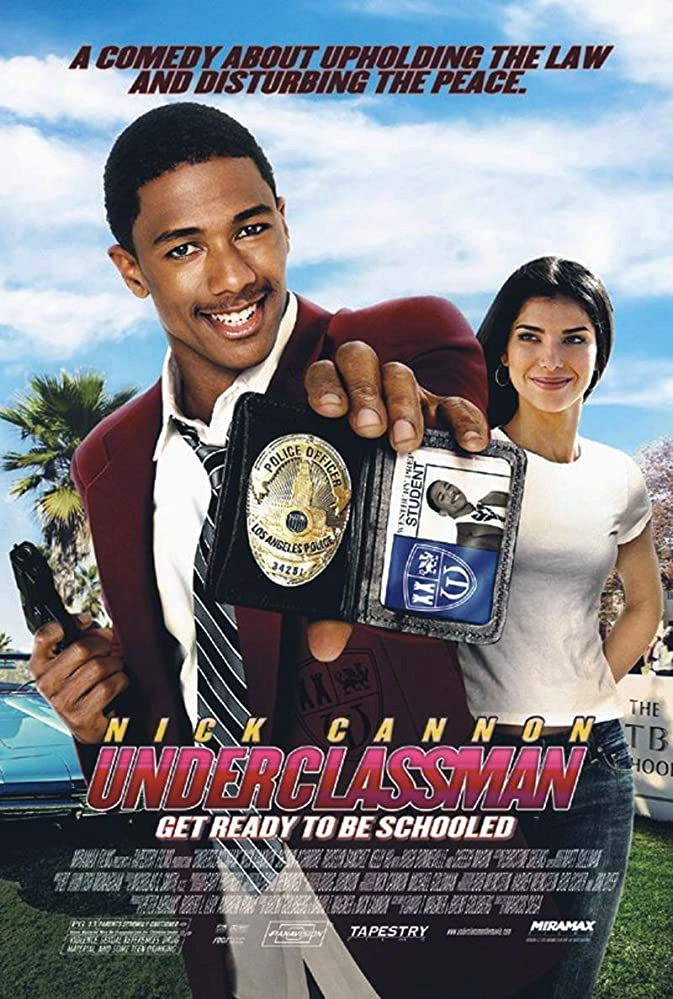