Succumbing to peer pressure in 1993, a young woman (Aubrey Plaza) decides to become more sexually experienced before going away to college. Seeking to lose her virginity, she makes a step-by-step checklist of sexual acts to follow, although it doesn't always bring the results she expects. Also with Johnny Simmons, Bill Hader, Alia Shawkat, Andy Samberg and Connie Britton. Directed by Maggie Carey. [1:43]


VIOLENCE/GORE 3 - A young man knocks down another young man in a parking lot, straddles the downed man around the throat and pushes his crotch into the young man's larynx to cut off his air; the attacker says he's "Smashing meat" and that he had sex with the downed man's girlfriend; the two men roll around on the ground and fight for a few minutes before getting tired and leaving.
► Throughout the film, two young women ages 18 and 19 argue constantly, shouting sexual profanities, name-calling and pushing each other; in one scene, they grab each other in anger and roll on a bed and onto the floor. Three young women shout and call one another names, because they are dating one another's boyfriends; two of the women shun the third woman and leave her house together while the third woman cries. A teen boy and a teen girl argue about their relationship or lack of one and he tells her that he hopes she dies of AIDS, since she has so many boyfriends; he slams a door as he walks out of her room and she cries.
► The staff of two rival swimming pools trash each other's pools with debris and soapsuds on alternate nights. Several lifeguards push a new lifeguard into the pool; she pushes the pool manager into the water and he yells for help, because he cannot swim and she jumps in and rescues him.
► A teen boy drinks beer from a funnel and vomits it back up onto the carpet (we see the vomit). A young woman vomits into a toilet after drinking peppermint Schnapps and we see greenish vomit in the bowl and on the outside of it. In a swimming pool, a lifeguard thinks that a lump of feces is a candy bar, so she picks it out of the water and takes a big bite; screaming, she jumps out of the pool and runs to the bathroom.

SUBSTANCE USE - Several men share a marijuana cigarette, a man smokes a marijuana cigarette in a maintenance building, and two young men and two young women at a party smoke a bong and drink beer and wine coolers until one young man falls asleep. Teenagers drink cups of beer from a beer keg at a graduation party, a teen boy drinks beer from a funnel and vomits it back up onto a carpet (we see the vomit), a teen girl becomes drunk as she does a handstand and chugs beer from a tube running from a keg (she falls without injury), several young women chug peppermint Schnapps and one vomits it into a toilet (we see greenish vomit in the bowl and on the outside of it), two teen boys drink peach Schnapps from a flask, a man and a 19-years-old boy drink cans of beer around a public swimming pool in the early morning and we see empty crushed beer cans on the cement, a man drinks cans of beer alone at night by a pool in two scenes and one daytime scene, several men drink beer around a swimming pool at night, and a teen girl's older sister tells her to drink a can of beer to relax before sex and that night while on a date the girl chugs a can of beer first before beginning to have sex (please see the Sex/Nudity category for more details). A man smokes a cigarette.

MESSAGE - Love is not a checklist. 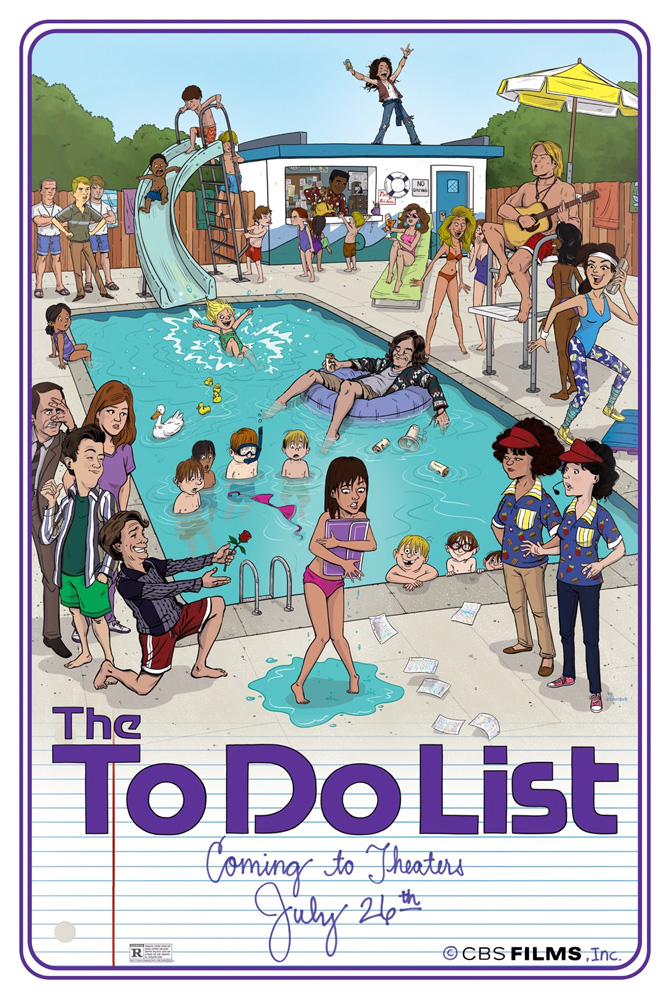