Daniel Day-Lewis stars as a silver prospector in the late 1800s who strikes oil and becomes wealthy by buying up petroleum-rich but un-farmable land in Texas from poor farmers. However, he soon discovers that wealth and power do not guarantee a happy life. Also with Ciaran Hinds, Dillon Freasier, Kevin J. O'Connor, Russell Harvard and Paul Dano. Directed by Paul Thomas Anderson. [2:38]

SEX/NUDITY 3 - A man pays for a prostitute and we see another man and a woman kissing in the distance.
► A man says, "we can buy some women" and another man says, "we can get liquored up and take them to a dance." A reference is made to "lusting after women."
► A doctor examines a boy wearing period underwear. Two men swim in an ocean, we see their bare chests and one of them is shown under water wearing long john-type underwear. A young woman wears a low-cut dress that reveals cleavage.

VIOLENCE/GORE 7 - A man holds a gun to the head of a sleeping man, he asks him questions and then shoots him in the head (we see blood spray, the man twitches, gasps and dies).
► A young man is struck in the head by a bowling pin, he falls to the floor motionless, and he is struck two more times (we hear thuds and a crunch and we see blood pooling under his head and body).
► A man in a well is struck by a metal pipe and killed; we see the body pulled out of the ground covered with mud and blood.
► A man climbs into a hole, pulls a metal pole out of the ground, and a heavy beam on the surface falls into the hole striking the man in the head and killing him (we hear a crunch).
► A man strikes a young man hard in the face several times, the young man falls to the ground and we see that he has a bloody nose; the man drags him by the hair, straddles him, continues to slap him in the face, smears his face with oil and pushes his face into the ground. A man throws a young man to the floor and rolls bowling balls at him (the young man is struck in the foot with one and he yells).
► A young man slaps a man in the face repeatedly while trying to "get the ghosts out" of him and we see the man with red welts on his cheeks. A boy punches and slaps his father briefly.
► A man climbs into a hole, a ladder rung breaks, he falls deep inside (we hear a thud and a crunch), strikes his head on the wall and breaks his leg; we see him pulling himself out of the hole and dragging himself along the ground to get to a nearby town.
► A young man lunges across a dinner table, pushes his father out of a chair, sits on top of him and yells abusively at him.
► A man slaps himself in the head a few times trying to collect himself (he's in a drunken stupor).
► A young boy lies on a perch near a hole in the ground where oil is being drilled for, a gust of steam blows out of the ground, the boy is struck by the blast, falls off the perch and lands hard on his back; he holds his head and cannot hear.
► A man digs a grave for a man he has just killed, pushes him in and begins to cover him with dirt.
► A boy runs away from a man who chases him, the man catches him and carries him back to a cabin. A young boy sets a fire in a cabin where a man is sleeping, the man wakes up, struggles to put out the fire and the boy runs away (no one is harmed).
► A man takes his young son onto a train and then abandons him as the train pulls away; the boy yells and panics when he realizes what's happening (another man holds the boy).
► A man mixes alcohol with milk and forces his young son (he's 9 or 10) to drink it. A young boy thrashes and moans during a medical examination.
► A man acts threatening to another man. A man disowns his son. A man is dismissive and verbally abusive to his young adult son.
► A man takes target practice at a pile of furniture inside his house. A large fire blows out of a hole from where oil is spewing, explosives in barrels are pushed toward the hole, and they blow up and extinguish the fire. A man mining for silver lights an explosive in a hole, climbs out of the hole and there is an explosion (he is not harmed).
► A young man "heals" a woman suffering from arthritis -- he yells, "get out of here ghosts" and "I will kick you in the teeth... I will bite you..., I will gum you…" and people in a congregation cheer and hoot.
► A man threatens to kill a man by coming to his home in the night and slashing his throat. After slapping a young man repeatedly, a man tells him that he will bury him underground. A man tells a young man "I told you I would eat you up." We hear that a man beats his young daughter if she doesn't pray. A man talks about serving time in jail and working on a chain gang. A man asks a young girl if her father is beating her anymore. A young man tells his father, "God doesn't save stupid people." A man talks about "hating most people" and "wanting no one else to succeed." We hear that a woman died during childbirth. People talk about "drinking the blood of the lord." A man tells a man that he is his brother by another mother. We hear that a man died from tuberculosis.
► A man becomes dizzy from fumes while digging in an oil well.
► A man and a boy hunt for quail, they shoot with shotguns and we see several birds on a string dangling from a man's belt. A man spits.
► We hear loud rumbling at a drilling site, oil blows out of the ground and sprays on men standing nearby.

MESSAGE - Greed comes with a price. 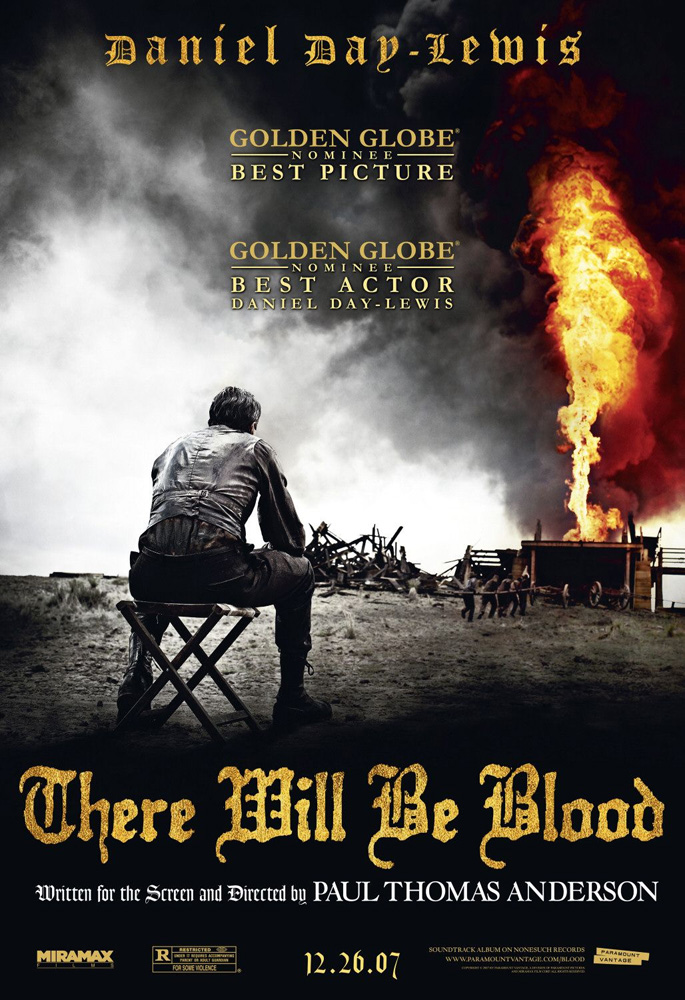