Based on a World War I memoir: an English woman (Alicia Vikander) delays her degree at Oxford University to volunteer as a military nurse attached to the army. After the war she enrolls in Oxford where she becomes a writer, feminist and anti-war advocate. Also with Dominic West, Hayley Atwell, Kit Harrington, Emily Watson and Taron Egerton. Directed by James Kent. [2:09]

SEX/NUDITY 3 - A completely nude soldier in a hospital encampment is shown in profile in a long shot standing in the rain and mud, moaning and muttering; one thigh and his hands conceal the genital area as nurses lead him back into a barracks ward. A grimy soldier receiving a sponge bath in a hospital reveals bare chest, abdomen and a little pubic hair; a little blood splatter is evident in the grime on his chest and we see deep scratches. A woman wears a corset that reveals slight cleavage and a floor length slip in her room as she imagines in a daydream a man's throat, neck, upper chest in an open shirt as the man slips a poem under her door (we do not see or hear the words). A marble statue of a female nude includes arms and hands covering breasts and genitals. A woman looks at a Dali-esque painting depicting dead men and women, some of them partially nude but in shadows, with arms or garments hiding breasts and crotches. A woman under water in a lake removes her outer blouse and swims in a blouse and long skirt; later, we see one man shirtless in profile.
► A man and a woman kiss passionately for several seconds in three scenes and in the third scene he proposes and she accepts before they kiss. A female chaperone closes a male soldier and her niece into a train compartment so they may kiss passionately for several seconds before he must board another train and travel to the war front.
► A man and a woman hold hands on a date but the woman's aunt sits between them; he reaches behind the aunt and tickles the younger woman's neck. A man and a woman hold hands in a café.
► A mother finds her adult daughter and a man talking on a garden path and asks what is going on; the man asks to see her daughter again with a chaperone. A woman's brother asks her about a relationship between her and another man and she is noncommittal. A nurse proposes to a friend who is a patient and he declines.

SUBSTANCE USE - Nurses administer pain medications to wounded soldiers, a nurse injects a shot of morphine into a soldiers arm (the needle is hidden by the cloth of the sleeve), a woman gives a solider two tablets to swallow for a fever and he does so, and we hear a nurse call for antiseptic to treat a soldier's infected leg wound (please see the Violence/Gore category for more details). Two scenes feature a parade on Armistice Day 1918 with a man holding a large bottle of champagne by the neck (no one drinks). A few soldiers smoke cigarettes in a trench and a man smokes a cigarette on a beach, two men smoke pipes, a man holds an unlit cigarette in his mouth, and two nurses share a cigarette in a dormitory room.

MESSAGE - War experiences can enhance a writer's determination to make a difference in the world. War is awful. 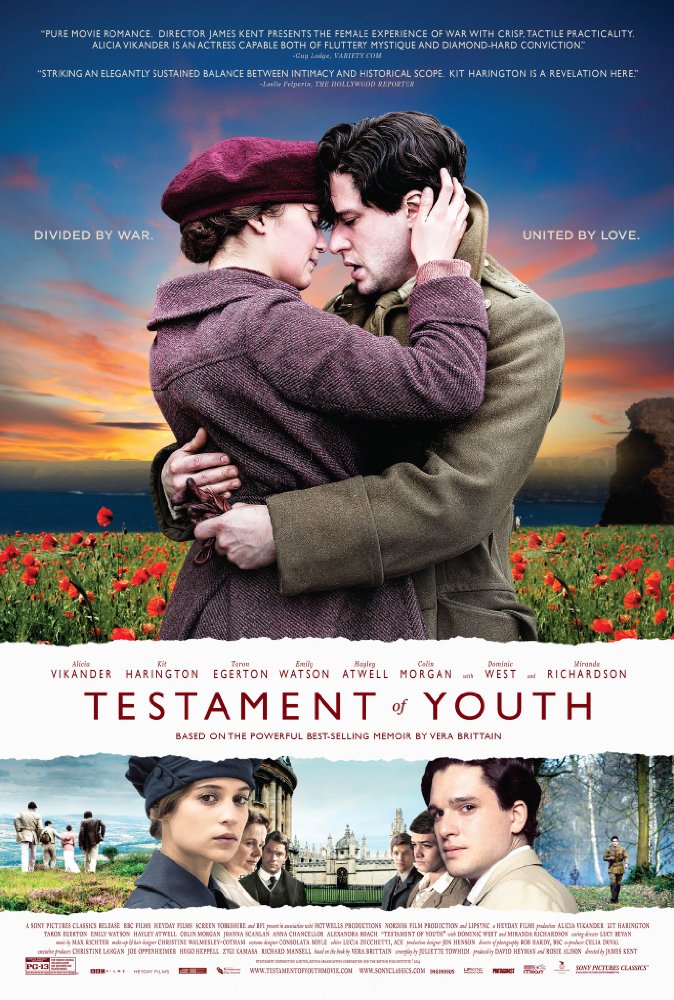