A U.S. Navy S.E.A.L. unit is sent on a mission into Nigeria to safely extract a doctor (Monica Bellucci) along with two nuns and a priest who are in danger of being attacked by rebels. The rebels are making their way through the country after a violent coup, brutalizing and massacring civilians. When the doctor refuses to abandon the refugees under her care, the leader of the U.S. force (Bruce Willis) must decide whether to follow orders or his conscience. Also with Cole Hauser, Fionnula Flanagan and Tom Skerritt. [1:58]

SEX/NUDITY 5 - A woman's top is torn open and exposes her bare breasts (this is during a rape scene, please see the Violence/Gore category for more details). A woman caresses a man's face and head and he rests his head on her chest. A woman's shirt exposes cleavage.

VIOLENCE/GORE 9 - We enter a hut where a woman screams and we see a man on top of her thrusting; we discover that what he was doing was cutting off her breasts (it is not clear whether or not she was also raped), and her dead infant is discovered under a nearby rock -- the woman is covered with blood and convulses from the pain before dying. A man is knifed to death. We see a village being attacked by rebels: we see a woman being shot, we hear women screaming, we see a man being brutally beaten, we see a man with a rubber tire around him struggling to get free while gasoline is poured over him, another man is beaten (he has blood on his chest and face) and shot. We see a man on top of a woman as he is raping her -- he is then killed by another man -- and we see a large pile of bloody bodies. There is a battle between rebels and the S.E.A.L. team with lots of gunfire exchanged and many grenades launched back and forth; we see several people who were injured or killed by falling trees and one man dies from a very bloody stomach wound. During another exchange between rebels and the S.E.A.L. team the soldiers try to hold the rebels back while civilians run for cover: a man tries to save a woman who is stuck and they are both mowed down by gunfire, two other men are shot, a woman is shot (we see blood coming from her ears), a man is shot and he falls dead in a stream, and a man is shot three times in the neck. Planes drop bombs and we see many people tossed into the air when they explode and a huge plume of smoke and fire. A man is shot as he runs away and we see a bloody hole in his chest and his shirt covered with blood. A man is shot through the shoulder (he falls back onto the ground and is stunned), and a man is shot in the leg. Several men are shot by snipers and other armed men as they go through a village, and some are stabbed with knives. A group of rebels enter a mission's compound, barge into the church, push a priest to his knees and one man raises a machete high over him and brings it down -- the camera cuts away before seeing the man being beheaded. We later see the mission buildings burning, bodies strewn through the compound, and the water surrounding the compound is red with blood. A man is grabbed from behind and stabbed (he struggles a bit and falls to the ground). Explosive charges are set off sending men through the air (we see one with a part of his leg missing) and there is a plume of red spray. A man is slashed on the arm by a man with a knife and we see blood dribbling from his hand later. We see images of streets burning and civilians running in fear from armed men: one man is shot down in the street, a woman is hit by a soldier, and we see a pile of dead bodies lying on a street. There are a few scenes that show a makeshift hospital where there are many people with very bloody wounds: a doctor is shown finishing surgery on a young man whose chest is very bloody, her surgical gown is blood-spattered, and blood drips into a bowl from a table. A man holds a gun to another man's head and threatens to shoot him. A man dreams of a rebel party racing through the jungle toward them. There are many tense scenes when a group of civilians, with a military escort, travels through a jungle and is nearly discovered by a band of rebels who are chasing them (people hide in the scrub and lie very still). There are many scenes of people grieving over dead people. A woman slaps a man in the face and yells at him. A woman is startled and frightened by men surfacing from the water where she is filling a bucket; she is grabbed over the mouth and held. We hear reports of ethnic skirmishes, we hear a report that an entire presidential family has been assassinated, we hear that a baby's mother has died from her injuries, and we hear that a woman's husband was killed. Soldiers parachute off the back of a plane. A man has a bloody cut on his forehead. A baboon yawns and we see its really long fangs.

MESSAGE - The only thing necessary for the triumph of evil is for good men to do nothing. 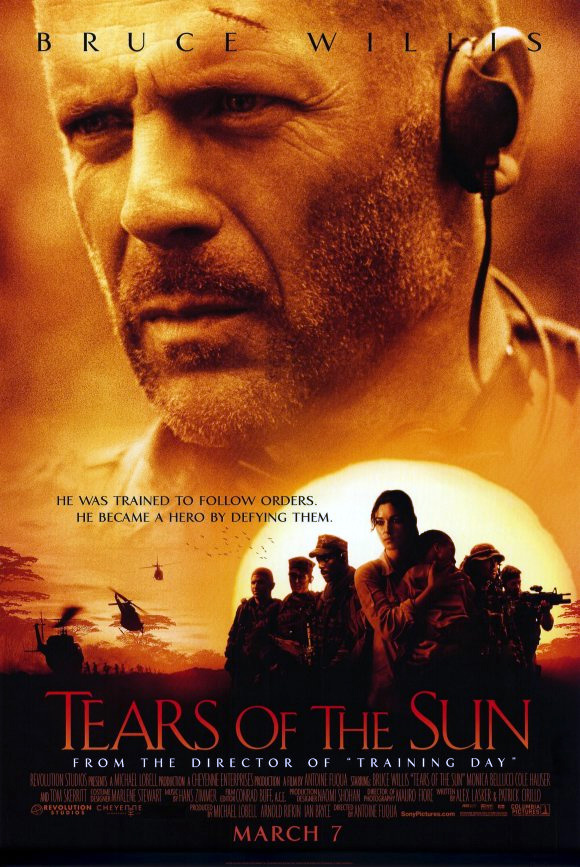