A small mouse named Despereaux (voiced by Matthew Broderick) does not fit in with his family and community because he is not afraid of things that cause automatic panic among his fellow mice. After being banished to a deep drain where rats live and from which no mouse has ever returned, Despereaux determines to save the life of a beautiful princess who is being threatened by the evil rat ruler. Also with the voices of Tracey Ullman, Emma Watson, Tony Hale, Frances Conroy, Frank Langella, Sigourney Weaver, Dustin Hoffman, Kevin Kline, William H. Macy, Stanley Tucci, Robbie Coltrane, Ciaran Hinds and Christopher Lloyd. Directed by Sam Fell & Rob Stevenhagen. [1:34]

SEX/NUDITY 1 - A young woman kisses her finger then touches a mouse's nose with it. A mouse describes a young woman as "beautiful, amazing and she smelled like a garden" and says, "she held me in her hand."

VIOLENCE/GORE 3 - A mouse is placed in an arena, a large cat is released while a large crowd of rats watches, the cat sharpens its claws (they sound like metal and the cat has large, pointed teeth), and it bats the mouse across the arena; the cat is then taken away by a chain.
► A young woman is tied to a piece of wood and dragged into an arena where rats clamber to get to her to eat her; a cat is released into the arena, and the rats run away. A girl holding a cleaver takes a young woman who is bound with ropes to a dungeon cell and locks her in.
► A mouse imagines many knights with swords fighting (we hear metal clanking, crunching and slashing), a platform falls and several men are crushed under it (we see them partially under the platform and the portion that is exposed is motionless).
► A rat falls into a bowl of soup and when it stands up and speaks to the woman eating the soup, she collapses and falls face first into the bowl (we understand that the woman is dead).
► A rat threatens a mouse, and holds him up for a cat to eat (the mouse is not eaten). A rat falls to the floor from a balcony, is chased by a cat, we hear meowing and slurping coming from inside a cage and we understand that the cat has eaten the rat. A mouse is lowered by a thread tied around his waist into a sewer drain, he is dropped, stops short, swings into an opening, falls down a flight of stairs, and is startled when he walks into a human skeleton.
► A man picks up a mouse, squeezes him in his fingers, throws him against a wall, and he falls to the floor where he is surrounded by many rats.
► Guards take a mouse away to court where he is sentenced to the dungeons (his mother weeps). A mouse walks on a partially rusted away grate over a deep sewer drain and other mice tell him that there are rats below, which "will pull your arms off and eat you." A mouse runs across a beam on which there are mousetraps, the mouse sets off a chain reaction and the traps snap closed (he is not caught). A mouse grabs cheese bits out of a mousetrap that springs shut, and while the mouse jumps clear, he lands on his head (he's OK). A mouse stabs a man in the foot with a needle (the man yells). A rat is struck by a ball and falls down a deep chute and lands on the ground, a man stabs at him (he misses) and the rat falls through a sewer grate and down the drain. Knights with swords and axes chase a rat, and the rat runs away. Rats chase a pile of vegetables that resemble a man, they bite at it, they pull a leg off and it falls to pieces.
► A mouse sees a man sleeping and many rats are crawling on him. Two beetles fight while rats watch and cheer them on.
► A young woman screams and tries to strike a rat, and the rat is chased by knights with weapons (he gets away).
► Many rats charge into a pile of slop and garbage to eat (we hear gnashing and slurping). We see rats in a dark sewer swimming in dirty water and we see piles of bones and other remains including fish bones and tails.
► A young woman screams when she sees a rat on her shoulder, the rat covers her mouth, she continues to scream, and then calms down. A man is startled when he sees a girl holding a cleaver. A woman yells at a girl when she discovers that she has taken things that do not belong to her. A man yells at a girl who is working in a pig sty. A young woman tells a girl that she looks ridiculous. Mice tease and laugh at another mouse. We see a man and a young woman grieving over the death of his wife and her mother.
► Automated butcher knives cut potatoes moving on a conveyor belt. Vegetables magically swirl around in a pot and come together in the shape of a man who speaks. A man pulls bits of vegetables off a group of vegetables in the shape of a man and it complains. A man and a vegetable man throw things at each other; one throws a bottle of wine that lands in a large pot of soup.
► We hear that a king's proclamation includes "no soup, no rats" and anyone who disobeys will "suffer the wrath of the king." We hear that when a heart is broken it can become twisted and gnarled. We hear that a woman is locked up in a place where she can see the world but not touch it. An angry-looking stone gargoyle is shown on a building.
► Many grubs squirm in a bowl in a couple of scenes and rats eat them. A man hits a meal tray and spills the food on the floor. A classroom of mice screams and cowers at the sight of a picture of a carving knife (all except one). A coin rolls through a village of mice and knocks things down (mice scurry out of its way and gasp). A mouse imagines a knight falling off his horse and being attacked by a three-headed dragon that blows fire at him (he protects himself with his shield). A rat sitting on a man's shoulder accidentally pulls on his earring when he tips over (the man complains). A rat has one pierced ear and the other has a piece missing.

SUBSTANCE USE - Wine is spilled into a soup pot and the soup is eaten by several people (no one seems affected by the alcohol).

MESSAGE - Every place has something special. No one starts out afraid. As long as you have hope you can never be anybody's prisoner. 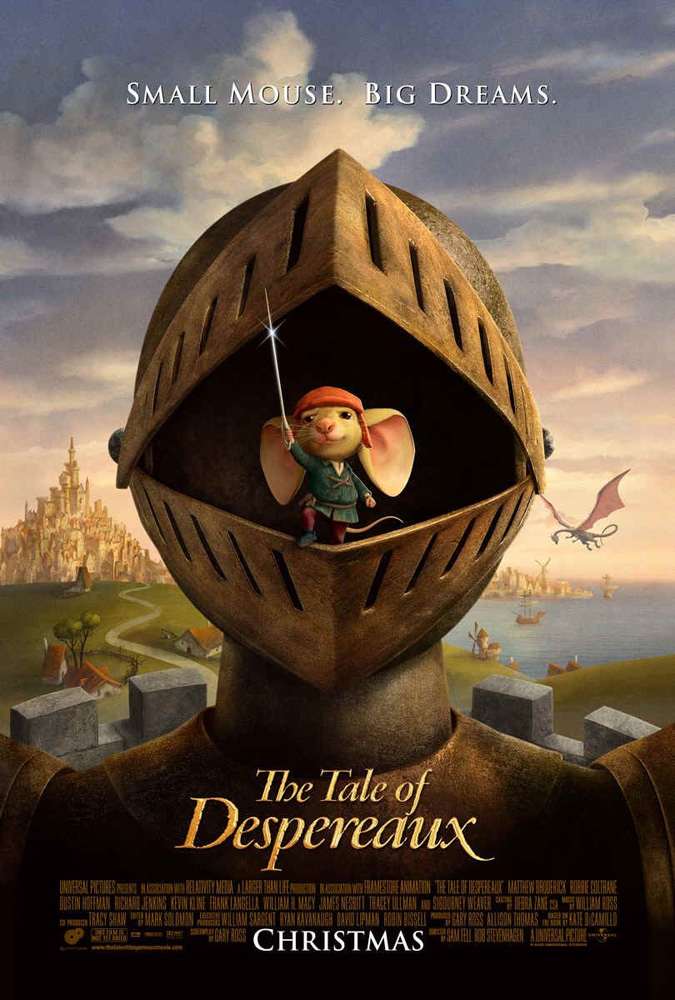