SEX/NUDITY 7 - A young man is sexually assaulted by various animals at once: A dog, a rabbit, a skunk, a hedgehog, a monkey, a lizard, and a snail all individually attempt to mate with the young man.
► A young man rubs a man's crotch underneath a desk. A man grabs a dead woman's breasts, lies on top of her and thrusts against her. A young man puts his crotch in a man's face.
► A young man shows another young man something "nasty" he downloaded on his laptop: we do not see the screen of the laptop, but we hear a sheep bleating (bestiality is implied).
► An explosive device adheres to a young man's crotch, and he attempts to convince a young woman to remove it. A man tugs at the crotch of his clothing.
► A young man and young woman kiss passionately (we see that they both have prominently erect nipples), and several couples are shown kissing passionately. A young man and young woman kiss and their tongues stick together and stretch out to an impossible length. A young woman kisses a young man on the cheek.
► A woman wearing a bra and panties slides down a pole. A boy takes a picture up the skirt of a girl. We see a woman with large breasts wearing a tight jumpsuit that reveals prominent cleavage. We see a young woman wearing a bra. A man rubs lotion onto his bare chest. We see a man in his underwear.
► A young man who is hanging upside down and a young woman are about to kiss when the ladder he is hanging from drops so that their faces are aligned with each other's crotches. Two inflatable characters rub against each other in ways that suggest sexual positions. A young woman grabs and manipulates her breasts. A man smothers a woman with a "roofie nap."
► A young man watches a young woman take off her bra, revealing that she is wearing another bra underneath. A young man rips off a man's underwear (we hear the sound of ripping off-screen, but do not see nudity). A young woman holds up several different pairs of panties as if choosing which one to wear, while a young man watches her through a window. A young man rips the pants and shirt off a man (we see the man's bare chest and boxer shorts). A young man's hands get stuck to the clothed breasts of a woman (he tears off sections of her shirt, revealing her bra underneath).
► A man refers to "2 girls, 1 cup" (a reference to an internet video with extremely graphic sexual and scatological content). A young woman bends over and a man makes a lewd comment about her body. A man lists "cheap internet porn" amongst a list of virtues. A young man comments that he is not sure if a person is a woman or a man dressed as a woman. A man explains that he received bruises from "meeting a girl on craigslist," implying that he met a woman for sex. A young man explains that he received bruises from "meeting a guy on craigslist," implying that he met a man for sex. A young man describes a group of men as "sexual predators." A man claims that having sex with one person is equivalent to having sex with all the people they have had sex with, therefore anyone who has had sex with a partner who has had a previous relationship is homosexual. A man reads a book about the changes that occur in a girl when she reaches puberty, including a description of menses. A man talks about menses. A paralyzed man talks about his inability to have sex, and his disappointment that his nurse is a lesbian. A man insults a woman by implying that she is no longer sexually attractive. A woman insults a man by claiming that he has a small penis. A doctor explains that they have removed a man's testicles. A man tells a young man that he needs to be circumcised. A young man's uncle says that he had an affair with the young man's mother (it is never revealed whether the uncle is the woman's brother or brother-in-law). A woman describes herself and her daughter as "whores." A man mentions his desire for a "Hooter's" restaurant. A young man is disturbed to see a headline about Rosie O'Donnell posing nude. A man includes "fixing a prostate" and "seeing through a tube top" in a list of superpowers. A hero's nickname is a word that describes male genitalia.
► A man who is trying to fit a corpse into a closet appears to an observer to be having sex with a woman.
► A man shaves his legs. A young woman inserts tampons into her nose.

SUBSTANCE USE - A man is seen taking steroids, there is a gag that makes reference to "roofies," and a doctor injects himself with pain medication. A young man smokes cake frosting out of a bong, a paralyzed man encourages teenagers to smoke marijuana, and a young man claims to have cut his lip on a crack pipe. A man and a dog drink alcohol out of a bag, a father figure gives a teenager a beer, and a woman shoves cigarette butts and vodka into a turkey. 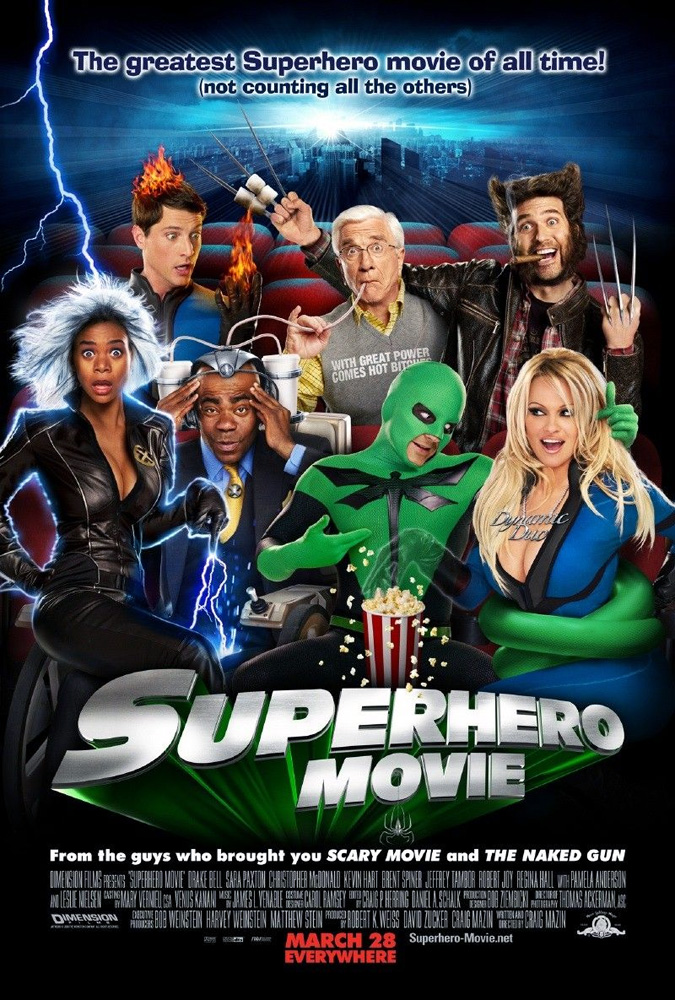