Keanu Reeves stars as a member of a vice squad, who takes the law into his own hands when dealing with criminals that traffic in sex slavery, drugs and guns. However, when his ex-partner talks to Internal Affairs about his less-than-upright job performance and then turns up dead, he becomes the prime suspect. Also with Forest Whitaker, Hugh Laurie, Chris Evans, Jay Mohr, John Corbett, The Game, Cedric The Entertainer and Naomie Harris. Directed by David Ayer. [1:47]

SEX/NUDITY 4 - We see a man bare-chested with a towel around his waist. Women wear low-cut dresses that reveal cleavage, bare shoulders and backs. A woman wearing a bikini swims in a pool.
► A man and a woman kiss in a hospital emergency room and she pulls the curtain to block them from view.
► There are comments made about young girls being kidnapped and kept for use as sex slaves ("kiddy rape"). A man threatens to rape a woman and then break her neck.
► A man makes a suggestive remark about another man performing oral sex on a man. A man accuses another man of going to prostitutes for sex and that his wife should know. A man talks about his wife's autopsy and being angry that the coroner did not do a vaginal swab on her. A man talks about his wife having been with another man.
► We see a plastic covered bed that it is implied is used for sex between a man and two girls.

VIOLENCE/GORE 8 - Two armed men burst into a store firing their weapons, the person behind the counter is shot repeatedly (we see blood spurt and the man's body jerks with the strikes), and another man is shot repeatedly and we see him with a bullet hole in his cheek while he lies in a pool of blood, and twitches and gasps.
► A man strikes a man in the head with a shovel (he collapses dead), and shoots another man in the head (blood spurts), who also falls to the ground dead.
► A man with a gun drawn kicks down the door of a house, shoots a man sitting at a table (blood spurts out of his chest), and then shoots another man sitting on a toilet (blood spurts and water pours from the broken toilet tank); another man shoots at the shooter, striking him in the side (he has a bulletproof vest on), he shoots back, striking the man in the back and the back of the head (there is a large, bloody hole through the man's cheek), and another man starts shooting and is shot in the neck (blood spurts).
► A man is shot in the neck (blood splatters, he gags, twitches and dies), another man is shot in the stomach, then in the leg, then several more times (we see bloody bullet holes), and another man is shot in the head (blood spurts). A man is shot in the chest twice and he falls back and dies.
► A man insults two Korean men using racial slurs, the two men then punch and kick him repeatedly and leave him writhing on the ground while they steal his car (he has blood on his head).
► A man in the back seat of a car, reaches to the driver and shoves an open handcuff into his mouth, the driver swerves the car, the man is punched in the face and knocked unconscious and we then see the other man with a bloody hole in his cheek, covered with a bandage.
► A man punches another man, shoves him to the floor, twists his arm back and breaks it (we hear it crack), and then shoves him in the trunk of a car and punches him hard in the head. Two men fight with punches, one holds the other around the throat, he twists a finger back until it breaks and one is handcuffed to a banister.
► A man punches and shoves a woman against a wall (she has blood in her mouth), she spits in his face and he threatens to rape her (they are interrupted).
► Two men with guns drawn enter an apartment, hold guns on a man and a woman, cuff the man and take him away. A man holds a gun on two men. A man kicks a door open, holds a gun on another man, puts handcuffs on him, then beats him in the head with telephone book (no blood), and then holds him in a choke hold.
► Two police officers with guns drawn enter a trailer and find a trail of blood: they follow it outside, then smell something, they uncover a body wrapped in plastic and buried in the ground and then another body (we see the bodies decayed and with gunshot wounds in the head and face). We see a body wrapped in plastic (we can see blood on the inside of the plastic) on a coroner's autopsy table.
► A man runs, a police officer chases him through alleys and over fences, and the man runs up onto a roof, slips down the other side and is stuck in razor wire (he complains of the pain and we see blood on him).
► A handcuffed man pulls himself along the ground while two other men shoot at him (he is not struck).
► A man has a bloody gunshot wound on his arm and a woman wraps a bandage around it. A woman wraps a heavy bandage around a man's ribcage (we see a bruise from a gunshot).
► A man opens a door and finds two young girls locked in a cage (they are huddled together and crying). Two women on TV shove and punch each other.
► A man threatens to rape a woman and then break her neck. A man stands up and moves aggressively toward another man (other men hold him back). Men yell at each other and shove each other in several scenes. A man threatens to pour gas on a man, light a match and burn him (figuratively). A police officer hears complaints about other police officers from citizens. A man tells another man to wash his mouth out with buckshot.
► A man throws a rock through a window. A man breaks a wall down using a lamp. A man cleans and loads his handgun.
► A man talks about his wife's autopsy and about being angry that the coroner did not do a vaginal swab on her. A man talks about being beaten up. A man talks about his wife dying from a brain aneurysm and that she died alone on a sidewalk in front of a hospital.
► We see a funeral and people grieving.
► A man vomits into a toilet (we see goo, hear him gag and spit). We see a dead shark floating on its back in a fish tank.

SUBSTANCE USE - Two men compare drugs that they have for sale. A man accuses another man of being a heroin addict. In several scenes a man is shown drinking from small bottles of vodka, people drink alcohol in a couple of party scenes, and a man eats Fruit Loops with beer. Two men smoke cigarettes, and a man smokes a cigarette or skinny cigar in a few scenes.

MESSAGE - More bloodshed does not wash away evil. We all have the capacity to be evil. 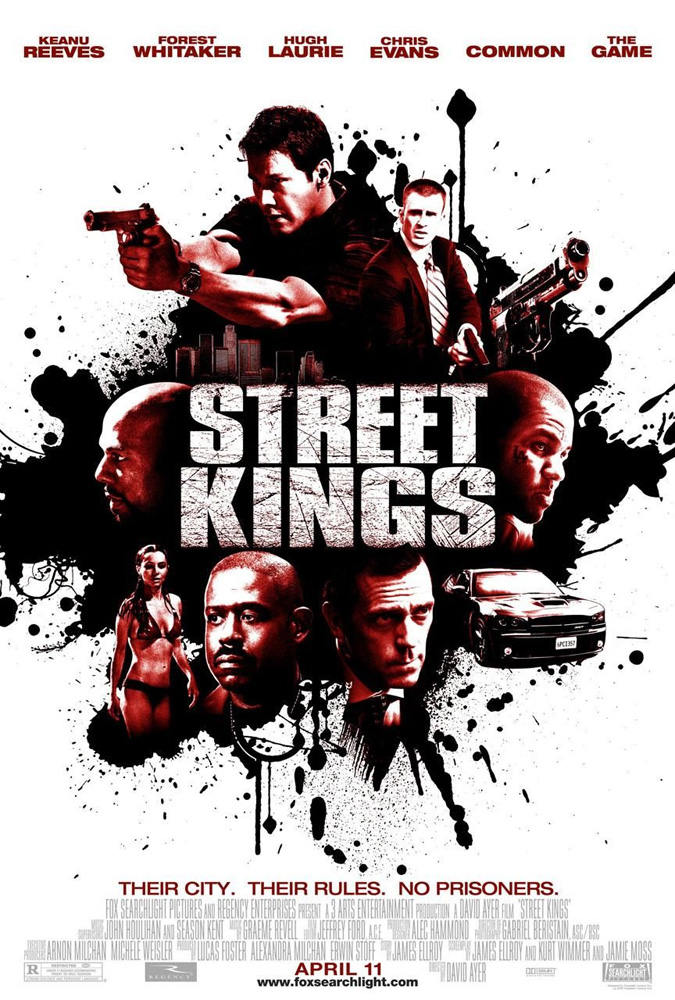