SEX/NUDITY 4 - A man rubs a woman's thigh, he puts his hand up her dress, removes her panties (we see her bare thigh) and the man unfastens his belt (they are interrupted by knocking at the door).
► A man unzips a woman's dress (her bare back is seen), we see a woman in a bathtub (her bare shoulders and legs are visible), we see a woman's bare back as she zips up a nightgown, and we see a woman wearing a shirt and panties as she pulls up a pair of pants.
► A man and woman kiss. A man and woman hug passionately.

VIOLENCE/GORE 7 - A man shoots a man in the head with a shotgun (blood splatter drips down a wall, and we see that the body is missing part of its skull and face and it lies in a pool of blood and matter); we see the corpse several other times throughout the film.
► A man stabs a man in the stomach twice with a knife, causing him to moan in pain; we see some blood on the man's shirt, but no visible wound. A woman stabs a man in the stomach twice with a knife. A teenager stabs a man in the stomach with a knife. A woman screams off-camera, implying that she is being stabbed. A man lies dead in a pool of blood, he has bloody cuts on his face, and his shirt is covered in blood.
► A man grabs a woman and slams her head into a wall, she falls and we see a bleeding cut on her cheek. A man is thrown violently to the floor (there's no blood and he is still conscious). A man runs toward another man, and we hear a thud, implying that he hit the man.
► A woman who is tied to a chair struggles to free herself, she has a large cut on her face which bleeds and a man who is also tied to a chair has many cuts on his face which are also bleeding. A woman, whose face and clothing are bloody, screams. A woman cuts her hand on broken glass and we see her hand covered in blood. A man bandages a woman's bloody hand.
► A man pushes a woman back to the ground to prevent her from looking at a dead body. A woman trips and falls into a hole, twisting her ankle and she moans in pain. We hear a man scream in pain, and a woman screams.
► There is blood splattered on a wall, we see a knife covered in blood, a man wipes blood off a knife, and a man drags a semi-conscious woman, leaving a trail of blood.
► There are many instances throughout the film where people in masks appear abruptly, startling the audience. A man hears loud knocking at the door, he approaches the door and an ax head breaks through from the other side. A woman smashes a radio with an ax.
► A couple speeds away in a car, and they are chased by a truck that smashes into the rear of the car, disabling it. A man in a parked car is startled by a rock thrown through his windshield (we do not see who threw the rock). A man fires a gun at a door, trying to hit someone on the other side.
► A voiceover provides statistics about violent crime.

SUBSTANCE USE - People drink alcohol at a party, a man and a woman drink champagne from a bottle, a woman drinks a beer, we see an inebriated man, and a man drinks alcohol and then immediately drives a car. A woman smokes cigarettes several times throughout the film.

MESSAGE - Violent crime can affect anyone without warning or reason. 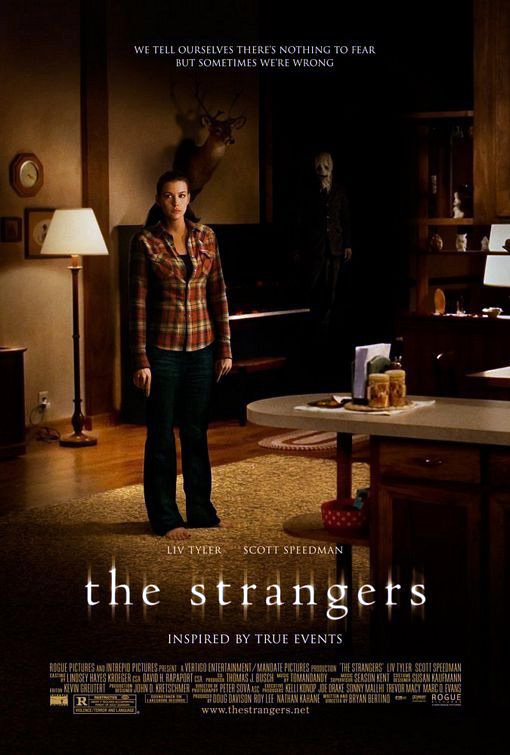