SEX/NUDITY 5 - A man and a woman (with green skin) kiss in bed: he is wearing only boxers, she is wearing bra and panties, he thrusts briefly and they are interrupted by her returning roommate (the man hides under the bed).
► During a fight a man stumbles into a woman and inadvertently places his hand on her clothed breast (they both look surprised). We see a woman delivering her baby (her bare knees and thighs are shown and a female doctor places her hands between the woman's legs to deliver the child). A woman wears a short skirt that reveals her bare thighs in several scenes.
► A woman enters a room and removes her clothing (we see her in bra and panties) not realizing there is a man in the room; he comes out from under the bed and holds clothes over his bare chest, wearing only boxers.
► A woman kisses a man, and she hugs him and caresses his head and neck. A man and a woman kiss tenderly and caress each other (they are both clothed and in public).
► A man tries to flirt with a woman. A man says to a woman while in a bar, "You've got a talented tongue" (we are told she is a linguist). A woman remarks to a man that she is surprised he "Doesn't only have sex with farm animals" and he replies "not only." A man remarks in suggestive terms about a spaceship, "I'd like to get my hands on her ample nacelles."


VIOLENCE/GORE 6 - A man is stabbed through the chest with a multi-bladed weapon (we hear a crunch). A man fights an alien with punches and kicks, and one is pushed over the edge of the platform they are on and one is stabbed through the back by another man with a sword (we see green goo on the sword when it pushes out through his chest).
► Several men fight in a bar scene, with many body and face blows and kicks; one man is s truck on the head with a bottle that shatters, and one man lands on his back on a table and we see his very bloody face and nose. People shoot at each other on a space vessel, and two men fight: one is struck on the back of the head, and one grabs another around the throat. Two men fight with punches and kicks, and one is held around the throat (he gags and gasps). A teenage boy attacks another teenage boy, punching him in the face repeatedly.
► A man is strapped to a table, a large beetle is held over him and we are told that it attaches itself to the brain stem; we hear the bug screeching and we see the man struggling as it is placed in his mouth.
► A man is held around the throat by another man, and he grabs his gun and shoots the man holding him at close range. A man with a sword fights an alien with a larger sword and one is pushed into flames.
► A man is crushed under a crumbling stone statue (we see the man disappear underneath). A man in a space vessel crashes into a much larger vessel (we see the man thrown forward on impact and a large explosion). A woman falls out of sight when the ground under her breaks away.
► A huge space vessel with long, spiked outcroppings approaches a much smaller vessel, starts firing its weapons, the smaller ship is struck, we see explosions and people being thrown, and one crew member is sucked out into space with no protective gear; people panic and scramble to escape pods, which are launched. A ship flies into a massive attack on a planet and through floating debris; the ship is fired on by a larger ship and returns fire (we see explosions). A space vessel is fired upon and breaks up as it implodes and is sucked into a black hole.
► Large columns of flames or laser beams shoot toward a planet and begin drilling a hole on its surface. We watch a planet implode and disappear. We hear about a star going supernova and we see an explosion.
► A man walks on a snow-covered planet, he is chased by a large creature with large, sharp teeth that is grabbed mid stride by another creature, which breaks up through the ground (it has a big beak-type jaw and pointed teeth); it chases the man down a steep hill, they run into a cavern and the man is trapped but the creature is scared away. Two men fall off a platform, one grabs the other, pulls his parachute, the parachute breaks, but they are saved before crashing down on a planet's surface. Two men are held at laser gun point.
► Three men space jump out of a pod and toward a planet surface, one crashes into a platform and is pulled over and into a column of flames, and the other two crash onto the platform (they're OK). A man is pinched on the neck by another man and he collapses.
► A large drilling device falls from the sky and crashes into water. A space vessel is pulled toward a black hole, and then pushed out by a large explosion.
► A man enters an alien vessel and is escorted by aliens with weapons. A man bumps his head on a beam in a transport ship (he's OK). A man is stuck in a water tube, and he is pushed through the tube and falls out of an emergency hatch just before being caught in a turbine.
► Several men argue in a few scenes. Three teenage boys try to provoke an emotional response out of another boy (they call him names and taunt him). A woman yells when she goes into labor and yells more when she delivers her baby. People talk about the destruction of a planet. A man speaks angrily to a boy over a speaker. A man tells another man "I may throw up on you."
► An alien has a large fleshy head and large eyes. An alien in a bar scene has an over-sized, human-looking head with large bumps on the skin. A female alien is humanoid with green skin, another alien is shown with gray-tinged skin and raised ridges on the head and face, and another is small in stature with very large black eyes and ridges on the head and face.
► A boy drives a car recklessly, is chased by police, speeds toward a cliff, jumps out of the car, slides toward the edge of the cliff, recovers, and we see the car go over.

SUBSTANCE USE - A man gives another man several injections in the neck, the man begins to sweat, his hands swell from a reaction to the medication and his tongue swells. Men, women and aliens are shown drinking alcohol in a bar scene, and a man drinks alcohol from a flask and shares it with another man.

MESSAGE - Going by your gut instincts can prove more effective than following the rules. 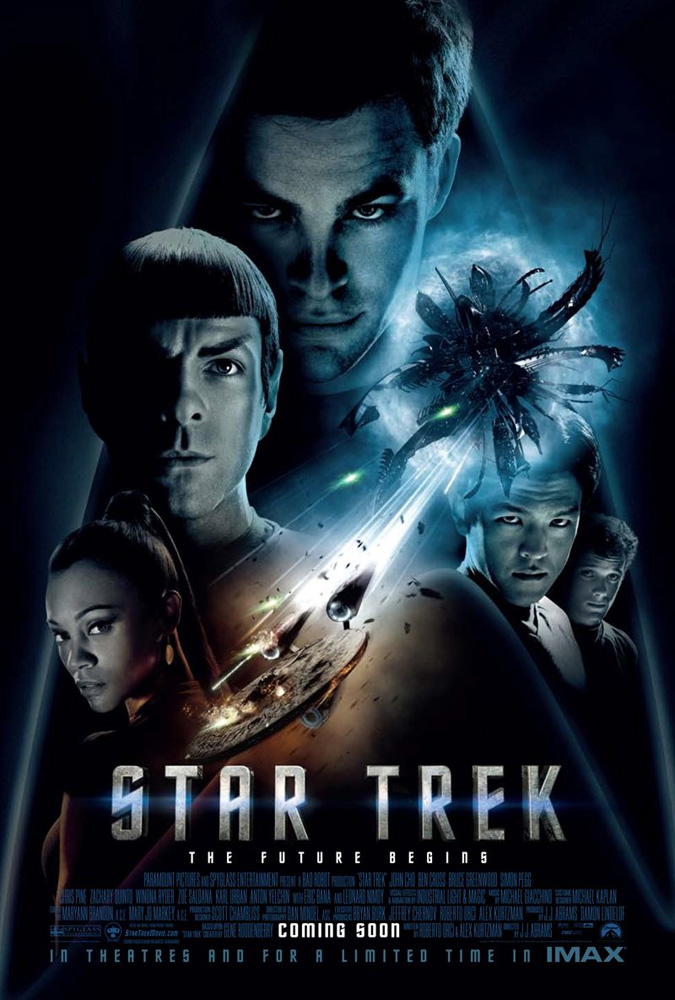