A married couple (Aaron Paul and Mary Elizabeth Winstead) struggle after the woman realizes that she has a drinking problem and seeks help to get sober. Also with Octavia Spencer, Nick Offerman and Megan Mullally. Directed by James Ponsoldt. [1:25]

SEX/NUDITY 6 - A man and a woman kiss passionately and attempt to have sex: we see the woman thrusting on top of the man (they are both fully clothed) until the man appears to fall asleep or black out, the woman slaps the man waking him momentarily, she realizes he has fallen back to sleep and continues to thrust on top of him.
► A husband hugs his wife from behind, kissing her shoulder; they kiss briefly and he kisses her face. A husband wraps his arms around his wife and they kiss; he compliments her repeatedly. A husband tries to kiss and hug his wife and she pushes away his drunken advances. A husband tries to kiss and climb on top of his wife and she pushes him away. A wife tries to engage her husband sexually by kissing him, rubbing his chest and trying to straddle him; the man turns the woman down and she berates him while crudely asking why he will not have sex with her.
► A man tells a woman that he has a crush on her, he then describes wanting to have sex with her using crude terms, detailing how he thought of her genitals; the woman is disgusted and shouts at the man for being crude and coming onto her since she is married. A woman shouts at a man, accusing him of being jealous that she does not want to perform oral sex on him and the man is flabbergasted. A woman tells a man that she is not upset that the man had come on to her, but tells him that he cannot use crude language to describe female genitalia or he "won't see" female genitalia. A man tells his former wife that he is masturbating frequently. A man asks his wife if when she was younger she would "hook up" with boys in the woods and the woman laughs and does not answer his question. A man tells his former wife that he would like to "flirt with her all day" and take her on a date; the woman declines.

VIOLENCE/GORE 3 - A woman shoves her husband away, but gets on top of him on the ground moments later as they appear to make up after the man tries to placate her (they are both drunk). A woman is upset and storms away after seeing her husband and two other men extremely intoxicated and the woman then pushes away the advances of her husband (please see the Sex/Nudity category for more details).
► During a drunken confrontation, a woman shouts angrily at a man who tells her to leave a shop. A woman shouts at her husband. A woman half-yells at her husband as he lies in bed.
► A woman tells a classroom of children that she had a miscarriage (the woman was never pregnant); a girl in the classroom shouts that the woman had killed her baby or had a doctor kill her baby, and the woman calms the children down saying she had not murdered her baby. A woman tells her husband that she wants to admit that she had lied to a classroom of children after they confronted her about her lying about being pregnant, including one of the children accusing the woman of "killing" her baby. A woman tells another woman that she had been confronted by a classroom of children asking if she had "killed her baby"; the woman then explains that she had not been pregnant but had lied to the classroom and the woman about a pregnancy to cover up for suffering from a hangover.
► A woman warns her former husband that he could have been killed riding a bike while intoxicated; the man replies that he used to worry about the woman being injured while intoxicated but no longer worries about it because she is sober.
► A woman throws up in front of a classroom of children (we see the vomit leave her mouth and then on the floor); the children act disgusted and one student asks the woman if she is throwing up because she is pregnant (not because she is suffering from a hangover). A woman tells another woman that she had thrown up because she was pregnant. A woman tells a man that she had thrown up because she had been drinking excessively and was not pregnant.
► A woman urinates on the ground of a store as the shopkeeper shouts at her; we see a pool of urine under the woman (no nudity is visible). We see a wet stain on a bed and a man tells a woman (his wife) that she had urinated on him; the woman says that she has a "weak bladder." A woman confesses to a room of people that she wants to be able to drink a beer "without wetting the bed." A woman jokes to a roomful of people that she would frequently pee in her pants when intoxicated.

SUBSTANCE USE - A woman accepts and smokes a crack pipe with another woman while extremely intoxicated, we see two women smoking from a crack pipe and we later see both women acting intoxicated (one woman talks rapidly and implies that she smoked crack with homeless people and she is then seen waking up under an overpass), a woman tells a man that she had smoked crack the previous night, a man teases a woman about smoking crack, a man tells a woman that her husband had told him that the woman had smoked crack and the woman becomes upset, a man asks a woman if she still smokes marijuana since she no longer drinks alcohol and the woman says no, and a woman tells a man and her adult daughter that she thinks the house next to hers is a "meth house." Throughout the movie we see men and women drinking to the point of extreme inebriation: A woman wakes up from a drinking binge outside and in a strange place on two occasions (once after smoking crack), a woman drinks from a flask in the early morning before going to work as a school teacher, a woman vomits due to her excessive drinking, a woman drives a car while inebriated, a woman rides a bike while inebriated (she swerves in front of traffic), a woman makes a scene at a liquor store while obviously inebriated after a man tells her she cannot buy liquor past a certain hour and the woman then steals two bottles of wine, a woman drinks a beer while taking a shower, a man warns a woman that she should not drink while pregnant and the woman tells the man that she is not actually pregnant, a woman is told by another woman that she frequently drinks and drives, a woman is seen drinking multiple shots of liquor and then stumbles around, a man rides a bike down a road while extremely inebriated and he swerves in front of a car and then crashes on the side of the road (a police officer is seen arresting the man and we later hear the man tell a woman he had been arrested for public intoxication), a man is seen in a constant state of inebriation, a man is shown drinking straight liquor, a man is shown having difficulty engaging sexually with his wife (please see the Sex/Nudity category for more details) without passing out, a man tells a woman that he has been sober for nine years and that he had previously had a problem with drinking and cocaine use, and a woman remarks that "No means yes" in reference to her adult daughter turning down a drink and the older woman serves her an alcoholic drink. We see a woman smoking a cigarette. 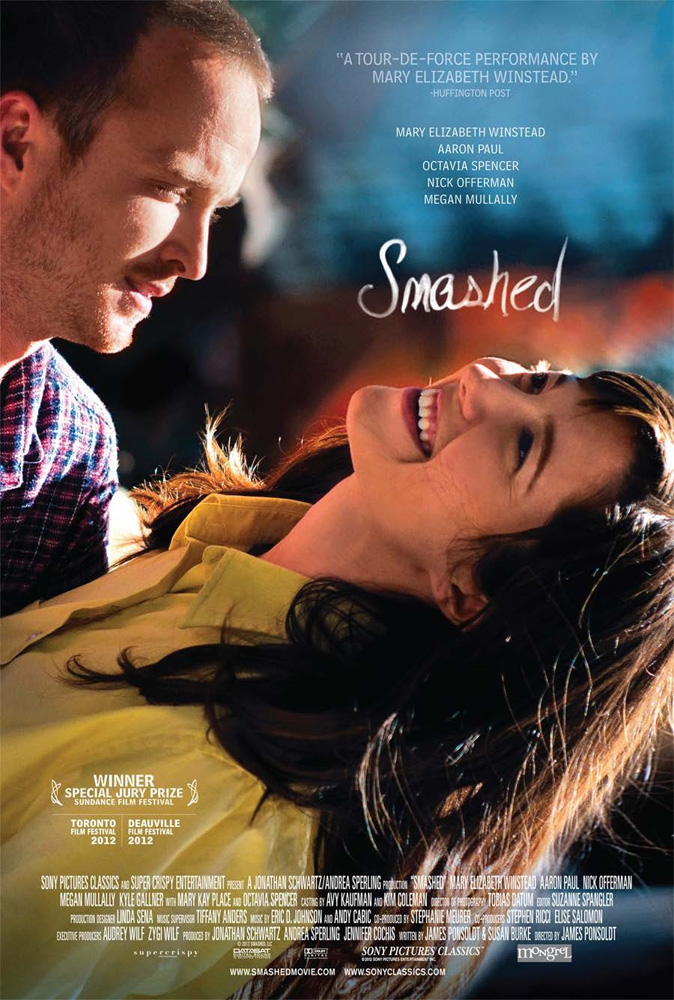