Chucky, the killer doll, along with spouse Tiffany decide that they are meant to become parents when they meet another doll which is convinced that they are its long lost parents. Several killings later the three choose appropriate humans to inhabit in order to complete the little family of killer dolls. With Jennifer Tilly, Redman, Hannah Spearritt, Bill Boyd and Brad Dourif. Directed by Don Mancini. [1:27]

SEX/NUDITY 7 - A male doll prepares to masturbate and asks a female doll for inspiration, so she pulls down her dress revealing her bare breasts; we then see the male doll moving rhythmically, we hear it moaning and we see it in silhouette, including its genitals. A man and a woman kiss passionately, he kisses her bare chest, they caress each other, and he unzips his pants and then pushes the woman's head into his lap. A woman kisses a man and he caresses her bare knee. A man and a woman kiss. A woman tries to seduce a man, and then invites him to her house to show him how "passionate" she is about playing a role in a movie that he is directing. Two dolls kiss passionately and moan. A man asks a woman about a sex scene she did with another woman in a movie, and the woman suggests that the three of them should get together sometime (implying having sex). A woman calls to her husband that she is going to take a shower and he says, "I'll be right there." A man admires a woman's cleavage during an interview. A woman eats a candy bar and moans with pleasure. We see a woman in a shower, the outline of her form is visible through an opaque shower curtain, and we see her bare shoulders and abdomen when the curtain is opened, as well as her bare breasts when she falls out of the shower (please see the Violence/Gore category for more details). A female doll inseminates a woman with a male doll's semen, using a turkey baster. We see a doll holding a cup of semen. We see animated sperm swimming through the cervical canal, attaching themselves to an egg and fertilizing it; the cells then divide, and we see a baby developing in utero. A woman wears low-cut and tight-fitting tops throughout the movie and they reveal her ample cleavage. A doll's pants are pulled down in an effort to determine its gender, we see its crotch, but there are no details. Two dolls talk about artificial insemination. A woman accuses another woman of prostituting herself for her career. A man talks about a puppet not being "anatomically correct." A woman screams when she sees her reflection and realizes she is far more pregnant than she thought. A woman's pregnancy moves at a record pace (she discovers that she is pregnant then wakes up the next day ready to deliver and goes into labor).

VIOLENCE/GORE 9 - One sequence shows the doll's eye view as it grabs a knife, makes its way up stairs toward a family, and stabs a man in the shoulder (the man falls back over a balcony and crashes to the floor below with a crunch); the doll then walks toward a woman who's in the shower, it pulls the curtain back, the woman screams, slips, falls out of the shower onto the floor with a crunch and we see blood seeping out from under her head. A doll stabs a man in the stomach while under a table (we hear squishing and see the man looking startled), and the doll continues stabbing and slashing and we see a pile of intestines pour out of the man's body (they're steaming and blood covered) that splatter onto the floor; the man then falls over dead and his head crashes onto the table, cracking the glass. A man puts a female doll onto a table and begins unscrewing its back panel (we see the doll grimacing and moaning), and when the man removes the panel we see blood and tissue; another doll throws a cable around the man's neck, and when it is pulled taut it cuts the man's head off sending it flipping into the air -- we see the body with blood spurting and gushing from the neck and the severed head bounces on the floor, and we see the doll's faces covered with blood. A man is startled when he hears a doll laughing, and he stumbles and falls into a shelf knocking over a bottle of sulphuric acid that spills on his face; we see his skin bubbling, and "melting" and sliding off his skull, and we hear him gasping and moaning and he eventually dies. A woman is sprayed in the face with a flame, she catches on fire, runs away, falls over a balcony and onto the ground below (we see her smoldering, charred face later). A man is stabbed in the chest, and he falls back and spits blood. A doll is hit in the head with an axe and blood trickles down its face. A doll is also stabbed and it bleeds. On a movie set, a man approaches a doll sitting against a tombstone, another doll wraps a Slinky around the man's neck from behind, and the first doll slashes the man across the stomach (some blood spurts); then the doll slashes the man across the throat, (more blood spurts), and then stabs the man in the stomach repeatedly (more blood spurts, sprays and gushes). A woman steps in puddles of blood, kicks a man's severed head, picks it up and kisses it (thinking it's a movie prop), and then drops it and screams when she sees a glob of blood pouring from the neck. A woman hits a woman on the head with a doll, she is splattered on the face with the woman's blood, and the injured woman falls to the floor, with blood trickling down her forehead. A doll hits a man on the head knocking him out. A woman slips and falls onto the floor, she gets up and runs, and a doll hits her in the back of the head with a statue knocking her out. A woman screams while in labor, she pushes, we hear squishing and a splash and see a baby with a bit of goo on its face; we hear more squishing and another baby is born. A doll wraps a sheet around a woman's head, and then ties her to a bed, and a man is tied to the bed next to the woman. A doll with a knife goes to a girl's room, lifts the knife over her bed, pulls back the sheet and stabs a doll in the eye. A boy opens a box with a doll's arm in it, and the arm attacks the boy and grabs him around the throat. A doll looks at a "Fangoria" magazine, which has the picture of a woman with a half-decayed face on the cover. A man puts a rat into a cage with a doll and tells the doll to kill it, the rat bites the man's finger and the doll runs away. A dead man falls out of a closet (we see his shirt stained with blood), and several other bodies fall out of another closet (they are all bloodstained). Two dolls fight with kicking and then one stabs the other and cuts off its arms, legs and head (blood gushes and spurts). A doll breaks a door open with an axe. A doll slaps another doll in the face, and two dolls argue bitterly. We see a room filled with monstrous, life-size dolls and tubs of stage blood. A girl unwraps a gift, looks at the contents with disgust and remarks about how ugly the doll is. A male doll urinates on itself in several scenes (we see a puddle collect by its shoes). A doll hits a man in the crotch (we hear a crunch and he moans). A doll has a badly scarred and gashed face, and another doll has pointed teeth. We see a coroner carrying a body in a body bag and then a severed head separately in a duffel bag. A woman vomits into her purse (we hear splatter). A car goes off the road and we see it explode.

SUBSTANCE USE - People and dolls are shown drinking alcohol. 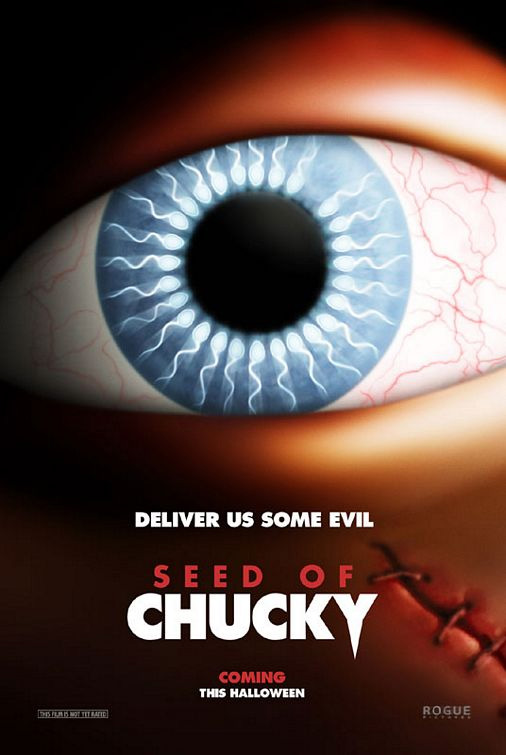