Why is “Save Yourselves!” rated R? The MPAA rating has been assigned for “for language.” The Kids-In-Mind.com evaluation includes, an implied sex scene, an interrupted sex scene, a few kissing scenes, and some cleavage revealing outfits, several encounters with alien beings and attacks that end in the deaths of a few people with bloody wounds, an orphaned child, a hallucination scene from an unknown agent, several arguments, and at least 18 F-words and other strong language. Read our parents’ guide below for details on sexual content, violence & strong language. A Brooklyn couple (Sunita Mani and John Reynolds), existing in their own technological and social media bubble, decides to unplug their devices and reconnect with each other by spending a week in an isolated cabin. Unconnected to news, and lacking any rustic skills, they don’t initially realize that the planet has been invaded by lethal alien creatures that look like furry poufs. Also with Ben Sinclair, John Early, Jo Firestone, Gary Richardson, Johanna Day, Zenobia Shroff and Amy Sedaris. Directed by Alex Huston Fischer & Eleanor Wilson. [Running Time: 1:33]

– A woman climbs onto a man’s lap and they kiss, he picks her up and puts her on a table where they continue to kiss (please see the Violence/Gore category for more details); we see them in bed later (sex is implied) and the man is shirtless (we see his bare chest and abdomen and the woman’s bare shoulders and back). A man kisses a woman’s neck, they lie back on a sofa and kiss as she wraps her legs around his waist; they are interrupted by text messages and do not continue kissing. A man and a woman snuggle in bed under covers. A man and a woman sit on a sofa looking at their phones and the woman has her feet in the man’s lap.
► A man says, “I plucked a gray nipple hair today.”
► A man and a woman shower together and we see their bare shoulders. A woman wears low-cut tops, camisoles and dresses that reveal cleavage in a few scenes. A woman wears a top that reveals her bare shoulders and cleavage and shorts that reveal bare legs to the upper thighs. A man wearing a T-shirt and boxers runs through a forest and seems frightened.

Save Yourselves! SUBSTANCE USE

– A man and woman smoke a marijuana cigarette, and a man talks about having been high on acid. People drink alcohol at a party in a bar, a man drinks bourbon and a woman drinks wine in a couple of scenes, and there are discussion about ethanol.

Save Yourselves! DISCUSSION TOPICS

– Smart devices keep us isolated and obsessing over them robs us of required life skills and real connections. 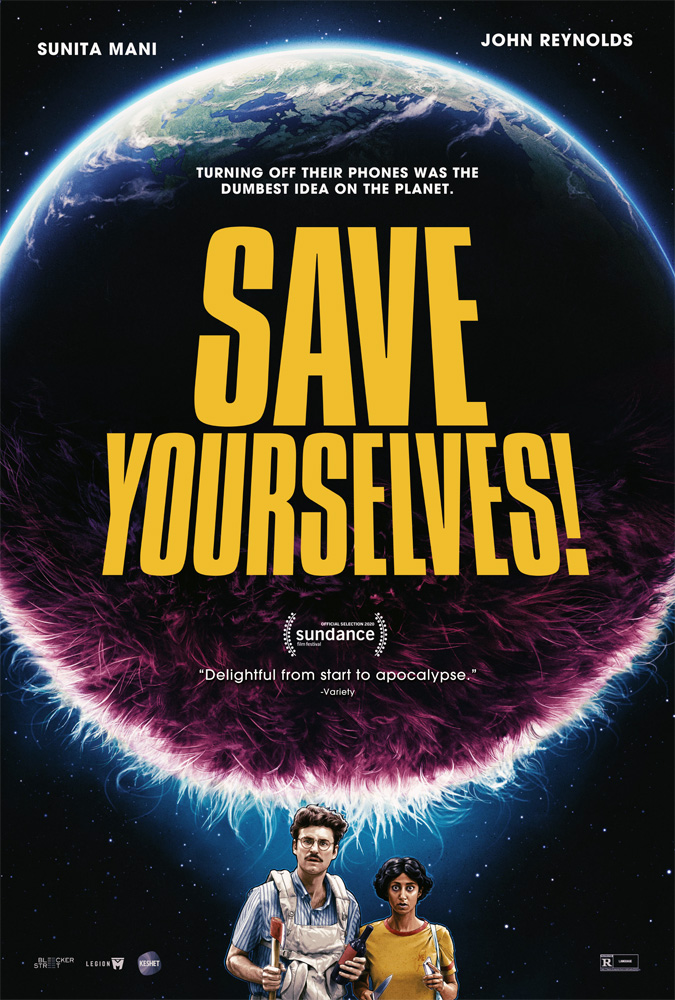