Remake of the eponymous 1975 film. It is 2005 and the world's most popular sport is a combination of roller derby and basketball. When a ruthless team owner will stop at nothing to maximize ratings and consequently profits, several star athletes (Chris Klein, Rebecca Romijn-Stamos and LL Cool J) revolt and try to expose corporate corruption, thus putting their lives in jeopardy. With Jean Reno, Naveen Andrews, Paul Heyman, Shane McMahon and Mike Dopud. [1:39]

SEX/NUDITY 5 - A woman pulls a seated man toward her chest (she's topless but a man's head hides her breasts) they kiss passionately and slam against several lockers; it is suggested that they have had sex -- we see them lying together, and his chest is bare. A woman works out with no shirt and we see her bare back and the side of her breast. Some costumes show the sides of women's breasts. A nightclub scene shows many women wearing revealing outfits and some dance on platforms; we see cleavage, midriffs, bare thighs and buttocks. A couple of locker room scenes show men bare-chested and women in their underwear (a woman's buttocks are exposed by her thong). A man opens his towel in front of a woman as a sexual invitation. A man "talks" to two women's cleavage, a man kisses a woman's chin, and a woman caresses a man's shoulder. A woman wears a cabaret costume that reveals cleavage.

VIOLENCE/GORE 7 - There are several Rollerball matches: the players skate fast around the track jumping ramps, knocking each other down, shoving, punching and flipping each other while there are two people on motorcycles who race around at the same time, jumping from ramps and crashing into the skaters. Some of the more violent sequences during the matches include: A skater is thrown into a Plexiglas wall, another skater crashes through a Plexiglas wall and into a crowd of people who appear to be attacking him (we see some blood on his face); a skater is run over by a motorcycle, a female skater tackles and pounds on a male skater after he grabs her buttocks, motorcyclists are knocked off their motorcycles, a motorcyclist flies off the track and over a wall falling hard to the ground (he has a bloody face), and two skaters fight with many punches (we see a very bloody face and swollen eye); a metal ball is thrown through a Plexiglas window and hits a man in the face (he's very bloody), skaters fly through the air and run into ramps with their heads or torsos, and skaters are hit with a metal scoop-like piece of equipment (it looks like a Jai-Alai cesta) which is sharp at one end -- some are cut and others appear as if their necks were broken. A man is shot in the back, a man on a motorcycle is shot and falls to the ground motionless, and a man is shot and flies back through a glass window shattering it. Two men on a motorcycle are shot at causing them to wipe out, and one man takes the motorcycle and jumps over an open bridge. A man is hit in the face with a metal ball, he falls back and screams (we see some blood on his face); we see this scene in a replay several times. A motorcycle leaks gas, a match is dropped into the liquid, the flame chases the motorcycle and it explodes (the rider is thrown off just before the explosion). A man beats several men who threaten him with guns; he beats two with punches and two with a heavy metal table. A man and woman enter a darkened room and a man threatens them with a gun. A man is punched repeatedly and kicked in the leg. A man yells at a man and pulls out a gun. Two men race on skeleton boards through the streets of San Francisco; they fly over hills and crash back down on the street, they swerve through traffic, they run through intersections, and they bump each other trying to throw each other off the boards. One of the racers runs into a parked car, flies through the air and crashes through a restaurant window. The other racer bounces off a truck tire, sails under the truck and climbs into a moving car. Demonstrators run through a street breaking car windshields with bats and blowing cars up with firebombs. After a Rollerball match people riot: the rioters beat many people up, drag people down to the ground, and overturn cars. A man threatens to throw a man out of a plane, a man grabs a woman's face violently, and a man holds a woman on the ground by stepping on her. Three cars chase a van on a dark road: the van knocks one off the road, squeezes another against a guard rail, and then spins around while its two occupants come out the back on a motorcycle. An airplane flies over the heads of two people on a motorcycle. A jeep tries to follow a motorcycle down a hill but it flips. A man is slapped in the face a few times, in different scenes. Two men race their cars through narrow streets. A woman talks about a man having had his throat slit and his mouth sewn shut. There is a discussion about the types of injuries one can suffer while playing Rollerball, if not properly protected. A woman knocks out a surveillance camera with a stick and sparks fly around. A woman has a large, jagged scar on her face.

LANGUAGE 5 - 3 F-words (there is an instance when the soundtrack has a man saying "fooling" but he mouths an F-word), 3 obscene hand gestures, 24 scatological terms, 6 sexual references, 9 anatomical terms, 10 mild obscenities, 6 religious profanities, 2 religious exclamations, and some insults.

SUBSTANCE USE - A man is shown smoking regular cigarettes and marijuana and people are shown drinking alcohol. A skater is seen being given an injection and there is a discussion about a skater being on PCP.

MESSAGE - Some sports are all about ratings and money. 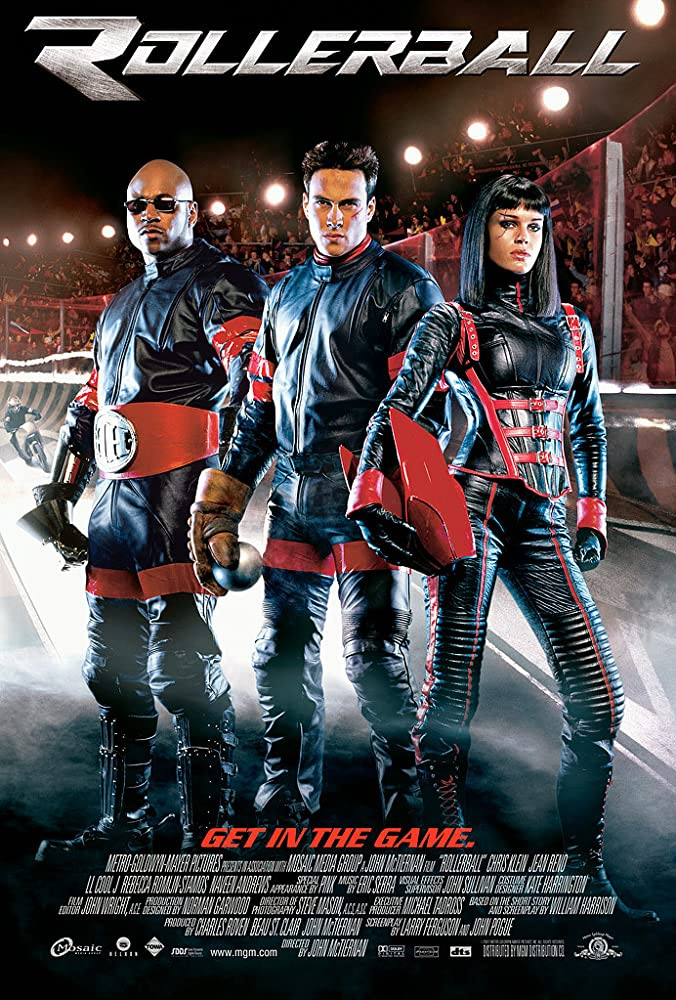