In this sequel to the popular children's film, it is the 1940s and Wendy is married and has a daughter and a son and is trying to make sure her family survives the London Blitz. One night her earnest and rather somber daughter Jane is abducted by Captain Hook. She ends up in Never Land hanging out with Peter Pan, the Lost Boys and Tinker Bell, and under their influence she discovers her inner child. With the voices of Harriet Owen, Blayne Weaver, Corey Burton, Jeff Bennett and Kath Soucie. [1:12]

SEX/NUDITY 1 - A man and woman hug and kiss goodbye. A man wears his long john's while getting a massage. A fairy wears a dress that exposes her bare back, shoulders and legs. Tinker Bell is jealous of Peter Pan's interest in Jane.

VIOLENCE/GORE 3 - A young girl in a sack is held over the side of a ship and a man threatens to drop her into the water where an enormous octopus awaits; she is dropped into the water, disappears with the octopus, a boy jumps in after her, and the octopus is thrust up and out of the water and it lands on a man on the deck of a ship. The man ends up in the octopus's mouth -- but he manages to get out. The octopus grabs a man by the legs, pulling down his pants (we see his underwear), wraps his tentacles around his ankles, drags him into the water, spits him out into the air and the man lands in a ship's hold. A man falls through the deck of a ship accompanied by an anchor, and breaks through the hull and into the water below; he's chased by the octopus but gets back on board. A man is frightened by the octopus and he clambers up a mast trying to get away. The octopus also chases a dinghy full of pirates. A pirate dumps kitchen waste (mostly fish bones) over the side of a ship in order to entice the octopus out of its hole (some of the waste spills on another pirate's hat.) Pirates shoot cannons at a group of young people, pirates shoot at a boy, and one pirate is flung into a group of pirates knocking them all down. A boy is tied to an anchor and swung over a group of pirates -- their swords are pointed up toward him; he's cut down and crashes onto the deck of the ship where a group of boys is tied to a mast. A boy walks the plank at knifepoint. A young girl and her dog run through the streets of WWII London when bombing begins and they hide under some wreckage. They then run into a street where they are almost hit by speeding trucks (we hear the explosions and see wrecked buildings). Pirates with swords attack a group of boys and a girl and end up taking a boy away with his hands tied. A girl is trapped on a sail pole by a man standing over her with a sword; she falls off the pole and manages to fly up and away just before she hits the water. But the man grabs her out of the air and pins her to a mast by placing his hook around her neck. A man and a boy fight with swords, the boy is knocked down, a fairy punches the man in the nose and the boy escapes. A man and a boy fight with swords briefly. A large sailing ship flies over a house, pirates slide down ropes onto the roof, and one opens a window to a room where a girl is sleeping; she wakes up with a start and the pirates stuff her in a bag and take her away on their flying ship. A fairy gets very sick when she learns that a girl doesn't believe in her, and the fairy's light starts dimming (symbolizing that she's expiring). Boys run into each other mid-air, one runs into a tree limb, and a girl crashes to the ground when she tries to fly. A girl is pushed off a tree limb and a boy catches her before she hits the ground. A girl is dropped down a tree stump and slides through a tunnel into a space where boys and a fairy live. We see scenes of a city in rubble from bombings, and we see a building burning while firefighters spray the flames with water. Pirates chase a group of boys; one pirate is tripped and runs into a mast, others jump overboard trying to grab at jewels that the boys are throwing into the water. A sailing ship flies through a city and its anchor tears up a brick-covered street, overturns cars, runs into a chimney, nearly hits Big Ben, and flies through oncoming airplanes. A girl tries to sail a raft, it leaks and sinks and she falls into the water. A man pokes a man in the nose, a girl punches a boy in the face, a man hits a man on the head with a hook, boys ram an object into a boy's mouth, a boy hits another boy on the head with a club, a girl holds a man at sword point, and a fairy is swatted at with a sword. A boy and girl fly through the air doing spins and flips, flying close to water and land. A boy tumbles off a top bunk bed and lands on his sister's shoulders, a can falls off a shelf and hits a girl on the head, a bucket lands on a boy's head and it is pushed down over his face by another boy. Boys are chased by bees, boys land and wallow in a mud puddle, a boy and a girl ride a log over a waterfall, and boys swing on a vine, slip off and land in water. Boys throw things at each other (pumpkins, etc.). A girl yells at her mother and younger brother in frustration and she slams her bedroom door. Boys and a girl spit onto their hands and then shake (there's lots of drippy, slimy saliva and this happens a few times). A boy swallows a book and burps loudly, and a boy blows his nose into the ear of another boy's rabbit costume. We hear bones crunching and cracking while a man gets a massage. There is a scene where young children are loaded onto trains. They are being separated from their families and sent to the country for safety.

LANGUAGE 1 - Some name-calling and some insults.

MESSAGE - There is no such thing as a silly fairy story; It's good for kids to unquestioningly believe in supernatural entities and they should be encouraged to do so.

(Note: A short cartoon prior to the feature entitled "Pluto's Fledgling" contains the following: A young nestling trying to learn to fly jumps out of his nest and lands in Pluto's water dish; the bird struggles to stay afloat, Pluto picks him up, wraps him in his tongue and delivers him back to his nest, high in a tree. Pluto falls off a chimney, down a roof, off a drain pipe, into a wood pile, he tumbles and lands hitting his head on his doghouse (this happens a couple of times). Pluto also runs, pulling the bird behind him and trips over an inner tube. Then Pluto makes a slingshot with the inner tube and he shoots himself and the bird into the air. He lands in a tennis court net and is sent back through the air; he tumbles down landing on the ground and hitting his head on his doghouse once more. All ends well, of course.) 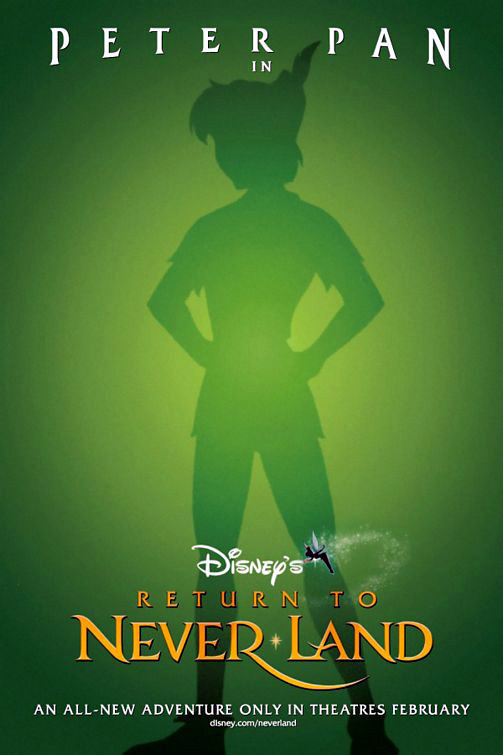