Sarah Michelle Gellar stars as a woman who has frequent and very scary supernatural visions and finds it difficult to stay in one place for very long. Eventually she travels to Texas, where she grew up but vowed never to return. Also with Kate Beahan, Peter O'Brien, Adam Scott and Sam Shepard. Directed by Asif Kapadia. [1:25]

SEX/NUDITY 3 - A man and a woman kiss in bed passionately. A husband and wife kiss.
► A woman wears a tank top in a few scenes that reveals cleavage and bare shoulders.
► A man tries to rape a woman (please see the Violence/Gore category for more details).
► A woman kisses a man on the cheek and touches his face tenderly. Men and women dance together in a bar.

VIOLENCE/GORE 6 - A woman stabs a man in the stomach, pulls the knife out, and he falls on her and he is stabbed again in the neck. A woman stabs herself in the side and falls over on the ground (we see blood on her shirt and hands). A woman takes a knife out of her pocket and cuts her arm deeply (we see the bloody gash later).
► A woman sees another woman being beaten by a man, the woman rips the man's earring out, he screams (we see blood), and he pulls out a knife. We see a badly wounded woman with blood on her abdomen and hands (she gasps and groans). A girl has a bruise on her forehead and seems afraid; she hears a voice, hides under a table, breaks a glass bottle that cuts her hand and uses a shard to cut herself on the leg (we see her bloody hand and leg).
► A man waits for a woman in her hotel room, he jumps on her, pushes her onto the bed and tries to rape her; another man throws the man off her, he follows him outside and beats him mercilessly (we hear loud blows and see blood on the man's face). A man with a chain strikes another man repeatedly.
► A woman hides in a livestock corral when she is chased by a man carrying heavy chains; he follows her, finds her, and she pushes him into machinery and runs away (he yells but we don't see any serious injury). A woman hides under a bed, a man finds her, pulls her out by the feet, she gets away and runs to a barn, he follows, catches her and beats her.
► A car crashes into a parked car, the driver has a bloody wound on his head, the passenger gasps and dies, and a little girl is unconscious with a bloody bruise on her forehead. A woman swerves on a road and crashes into a stream (we see her with a bloody head wound).
► A man punches through a wall to try to get to a woman who is hiding on the other side, and she screams and runs. A man chases a woman through woods and into a barn. A man grabs a woman's arm, she struggles to pull away, and another man shoves the man away.
► A woman hides under her bed when a man breaks into her room, and she screams and runs when he bends down and lifts the bed skirt to see her. A man shoves a woman against a door and seems threatening.
► A woman gets out of her car on a dark road, she steps into broken glass and sees two cars that have apparently collided (we do not see the people in the cars) and she seems terrified (she collapses and wakes up with a cut on her leg).
► A woman walks through a run-down house looking for someone. A woman screams when she sees a girl in her backseat, whispering to her. A woman hears a girl's voice whispering and she wakes up with a start. A woman is frightened several times when she sees another woman's reflection in mirrors instead of her own. A woman flashes back to a car accident in several scenes. A woman is frightened by a man's voice cutting in on a conversation she is having with someone else on her cell phone. A haunting melody plays over and over again in several scenes.
► A man tells a woman that his wife was murdered and he was the prime suspect. We hear that a woman used to see and hear things and hurt herself after having had an accident as a child.
► We see an animal leg hanging in the background in what seems like a hotel sharing space with a butcher or BBQ restaurant.

MESSAGE - Going home can sometimes help answer painful questions from the past. 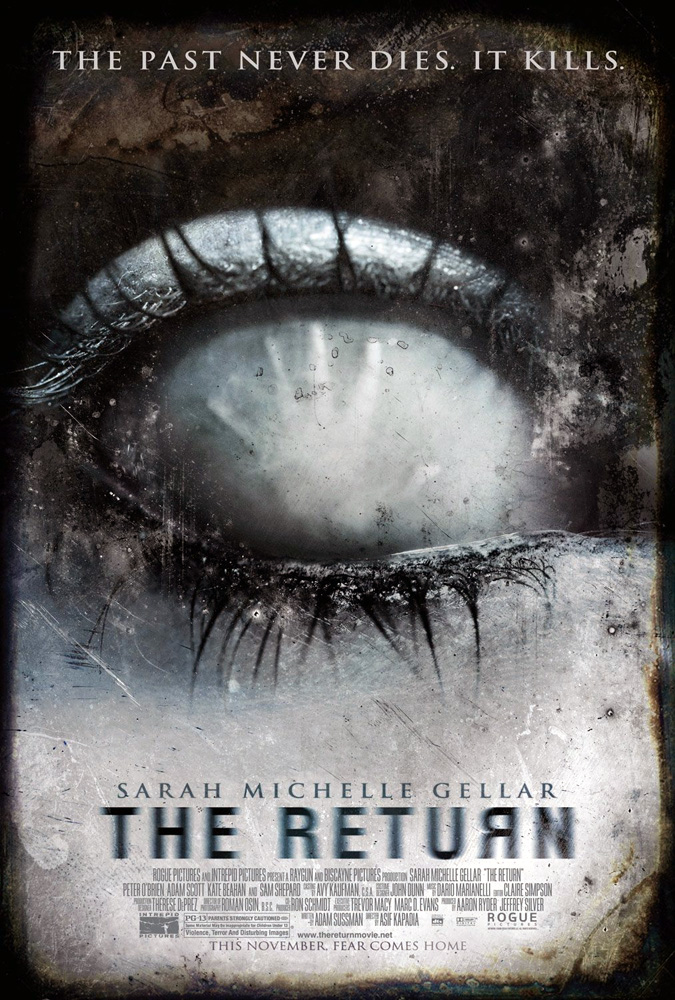