Based on the eponymous video game, it takes place in the near-future, when an all-powerful corporation runs a top-secret research facility where they create viral weaponry through genetic experimentation. One result is a deadly virus that turns into zombies all who are exposed to it. Milla Jovovich and Michelle Rodriguez star as the leaders of a commando team that has three hours to destroy the facility before the virus takes over all of Earth. Also with Eric Mabius, James Purefoy and Martin Crewes. [1:40]

SEX/NUDITY 5 - A woman has a few flashbacks to when she was having sex with a man; we see them kissing and rolling around on a bed, and we see bare backs and shoulders. A woman, barely covered by tissue, lies on a table and when she gets off we see a glimpse of her pubic region, her side, her legs and bare shoulders. We see the side of a woman's breast and nipple as she puts on a robe. A woman lies nude in a shower, partially covered with a curtain (we see her bare back, hip and shoulders). A woman wears a short, slinky dress throughout the movie, which exposes her bare back, shoulders and legs. A woman says, "I could kiss you" to another woman (it's not clear whether there was a sexual connotation).

VIOLENCE/GORE 8 - The zombies are all ashen in color, have blackened teeth, some have gaping wounds, most are malformed (bent limbs, etc.) and they growl and snarl. Four soldiers are trapped in a corridor and a laser beam comes toward them: one man's hand is cut off, a woman's head is cut off (we see her neck separate and her head slides to the ground), another person is cut in half at the waist and yet another is cut into cubes (all the scenes are accompanied by lots of bloody tissue and squishy sounds). A reptilian-looking mutated creature with huge sharp claws drops on top of a man, tears at him, thrashing its head around and then turns around to show us its very long tongue and blood covered teeth -- we see a huge puddle of blood around the man and see him later as a zombie, with fogged eyes and gashed and bloody skin). We also watch as the reptilian-looking mutated creature mutates into a larger reptilian-looking mutated creature. A man opens a door and is attacked by zombies who grab him and begin biting and tearing at him (we hear ripping, gnashing, chomping, and his screams), and we see him later slashed and gouged. A woman walks alone through a laboratory (the walls are smeared with blood and animal cages are covered with bloody tissue), she hears something approaching her and then sees a blood-covered zombie dog that snarls, barks and chases her through a door where a human zombie lunges at her; the woman kicks and punches it sending it crashing into glass shelves. A zombie dog lunges at a woman, she runs through a door and meets a pack of zombie dogs on the other side; she shoots many of them and then jumps and kicks one across the room. A group of people are chased by the mutated creature; it attacks them while in a train, pulling one man out, slashing another on the arm, and it grabs a woman's leg with its tongue; she pierces the tongue with a metal rod, the creature falls onto the tracks and bursts into flames. A woman attacks many zombies, snapping their necks with her hands and legs. A zombie attacks a woman and bites her hand; we see the bloody hole in her hand. Zombies bite a woman's arm and a man's leg. A zombie emerges from under water, sneaks up on a man, bites his shoulder, and he shoots it. A zombie attacks a man and he shoots it in the head. A zombie walks toward a man, pushes him down and tries to bite him until it is hit on the head and falls to the ground. A facility full of people locks down killing everyone: people are trapped in elevators that plunge to the ground, people are trapped in a lab that fills with water (we see a dead woman floating in the water later and her eyes open), and gas is released into a site full of people (we see them clamoring at the door while they gag and convulse). A woman tries to squeeze through a partially closed elevator door, she's trapped and the elevator starts to move again, presumably cutting her in half (we see her moving fast toward the top of the elevator door and hear her scream). A woman hits a zombie in the back with an axe; we see it with the ax in its back. People climb along a ventilating shaft that hangs from cables that break and send two of them into the waiting arms of zombies (one gets free and the other is trapped on a perch with zombies grabbing at him). We see a woman's very bloody arm and hand several times and at one point she drips blood onto a horde of zombies below her. Gunfire causes an explosion that throws people to the ground, and some zombies are shown in flames. Many zombies are shot repeatedly; they go down when they are first hit but become re-animated. A woman begs another woman to kill her; the woman swings an axe and we think she's going to hit the other woman, but crashes it into a monitor instead. The slashes on a man's arm start to sprout quills and he convulses. A man puts his pistol in his mouth and we hear a gunshot. A man is shoved against a grate and many zombies grab at him, a zombie grabs at a man's leg and he kicks it repeatedly. Some people are chased by zombies and are grabbed at as they squeeze through a door. A bloody rabbit lies on a dissecting table. Two people are injected in the arm, and a woman screams as she pulls out IV needles and we see some blood on her arms, legs and head. Armed troops crash into a house, handcuff a man and hold a gun to his head, and a woman is shoved against a wall. A woman walks through a deserted, rubble-covered street with blood smeared on burning cars. A virus is released from a canister and it goes into air vents. A woman has a large scar on her shoulder and a large bruise on her other shoulder, and a woman vomits and we hear her gag and see the goo. A woman is startled when she hears scratching and footsteps, a woman is frightened when a huge flock of squawking birds take flight, and a couple of people are threatened with guns. An unconscious man falls to the ground when a door is opened, and a soldier picks her fingernail with a sharp knife.

MESSAGE - Greedy and powerful corporations can bring about the end of humanity. 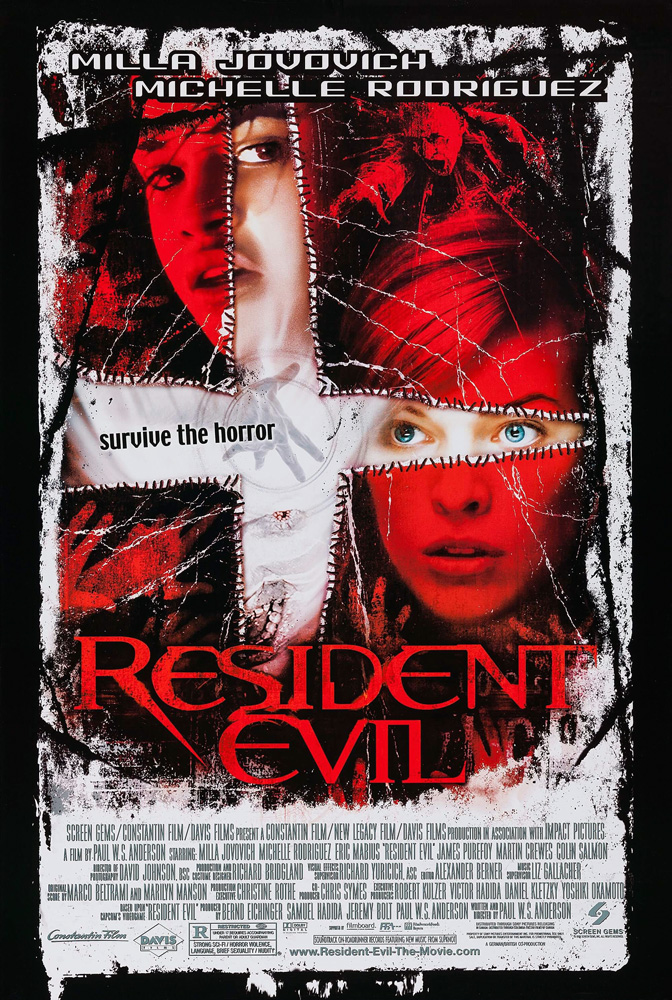