A young boy loses his mother to an attack by a fire-breathing, flying dragon when hordes of the supposedly legendary creatures attack the Earth. Fast forward to 2020 and the orphaned boy has grown to be a man (Christian Bale) who's still fighting dragons. He and a small group of survivors barely hang on in a burned-out castle, until the battle is brought to their doorstep by an overzealous, self-proclaimed dragonslayer extraordinaire (Matthew McConaughey). Also with Izabella Scorupco, Gerard Butler and Alexander Siddig. [1:40]

SEX/NUDITY 1 - A woman touches a man's face tenderly. There appears to be a certain attraction between a man and woman. A few men are shown bare-chested. A man sits on a tank gun turret with the gun between his legs (this could imaginatively be construed as being phallic). There is a discussion about dragons fertilizing their eggs.

VIOLENCE/GORE 5 - A parachutist, being chased by a dragon, crashes into the ground and his blip on a radar screen disappears, and another man is run into, mid-air, by the dragon. A man on horseback charges toward a ridge while being chased by a dragon, which is shot when it comes over the crest; it then crashes into the ground dead. A young man on the roof of a truck is burned when a dragon blows fire at the truck. A group of people is attacked by dragons in a field; one man is snatched off the ground by a dragon, another is burned badly on the side of his face and the remaining people are surrounded by flames. A woman and a boy ride a construction elevator up through a shaft and are chased by a dragon who blows fire on them and slams against the cage (we see the woman with a bloody head later, and she is dead). We hear on a radio as a man is attacked and killed by a dragon. A man swings his ax at a dead dragon (presumably to remove one of its teeth for a souvenir). A dragon is shot with an explosive arrow by a man on a tower, it comes back toward him and the man jumps from the tower, hits the dragon with an ax and ends up in the dragon's mouth (we see the man's arms and legs on either side of the dragon's mouth). A man shoots a dragon with an explosive arrow and it falls to the ground dead. A dragon flies over a group of men on a road, one man shoots his gun at it, the dragon blows fire and we see many bodies engulfed in flames (from a distance), and we hear that all but three people were incinerated. A man on a stairway is engulfed in flames (the flames come down the stairs and a door slams in front of our view so we don't actually see him burning). A dragon flies underneath a helicopter and rams it with its head knocking a man out of the helicopter, two others follow and the dragon chases them. A dragon blows a flame that fills a tunnel and apparently kills two men. Many dragons are perched on burned out buildings, they take flight and one is grabbed mid-air and eaten by another. A man runs through a street and is knocked down by a dragon flying overhead. A boy walks into a hole made by a drilling machine; fires pop up behind and around him and he is spat upon by a large winged dragon (we see that his eyes are bloody later). A dragon blows fire at a man sending him backward through the air. A woman is nearly hit by falling debris and a woman is chased by a roaring dragon. A dragon blows flames that reduce a castle to burning rubble (the people inside the castle scatter in panic and the children are rounded up and taken to a basement room). A man pulls an egg out of a dragon's womb (we hear a squishy sound and see some bloody tissue dangling). A dragon is shot several times as it follows a man and woman along a street. Two men fistfight, roll around on the ground and one is head-butted and punched repeatedly in the head while being held on the ground (both men have bloody mouths and we see one treating his bloody arm later). Tanks and trucks drive along a dark road and we see a charred skeleton. A bird sounds alarms several times alerting people in a castle that the dragons are near. Men arm themselves when trucks and tanks approach their compound. A man talks about his wife and two children being dead, and a man talks about a boy trying to wake up his dead mother. Children are rounded up and taken to a basement for safety a couple of times; they are frightened, scream and cry. There are references to the dragons burning everything in their path, and to people and dragons starving. Two men act out scenes from "Star Wars" for an audience of children. People talk about dragons being able to create natural napalm from secretions in their mouths.

SUBSTANCE USE - People drink alcohol and a man gnaws on a cigar butt throughout the movie.

MESSAGE - We can make a difference if we do not give up. 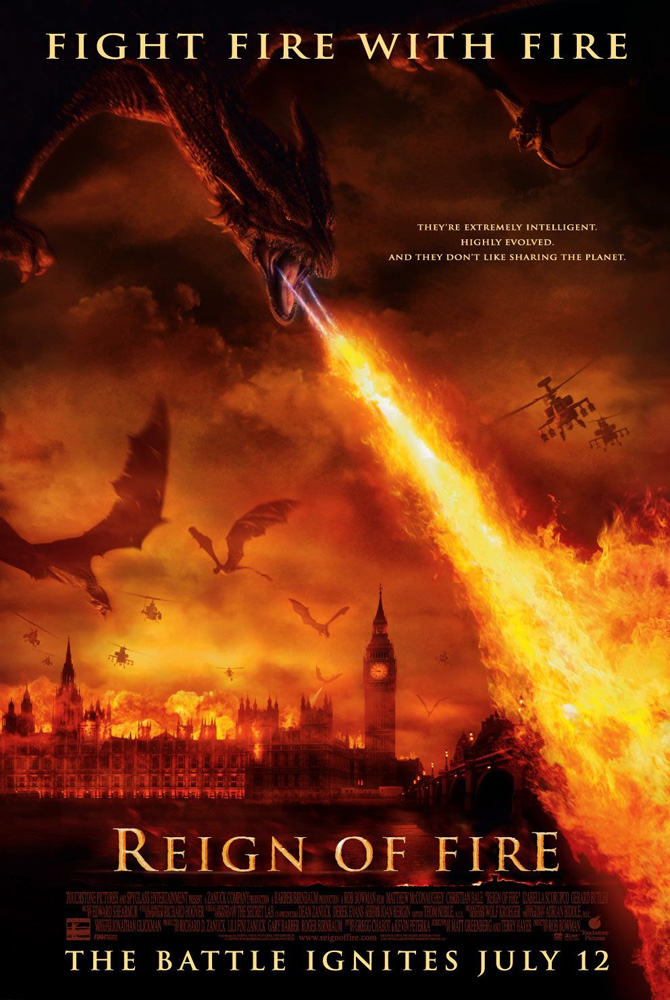