Inspired by true events: While the US air force in WWII was losing bombers in their missions over Europe, some of the best combat escort fighters were kept segregated and away from the action because they were African American. Eventually, the pilots of the Tuskegee training program were called into duty and took their place in history as never losing a single American bomber. With Cuba Gooding, Jr., Terrence Howard, Nate Parker, Kevin Phillips, Daniela Ruah, David Oyelowo, Method Man, Elijah Kelley, Andre Royo, Tristan Palmer, Marcus T. Paulk, Ne-Yo and Gerald McRaney. Directed by Anthony Hemingway. [2:05]

SEX/NUDITY 2 - A man and a woman share a brief kiss and hugs in several scenes.
► A woman wears a white slip that reveals bare shoulders and legs and stands at a window with her fiancé, who is shirtless; the implication is that they have had sex. Men on an air base play basketball and two of them are shirtless (their bare backs and chests are seen).
► A man proposes marriage to a woman and she accepts after thinking it over for a few days. Several pilots joke about not being able to find a girlfriend. A pilot says that he has found a girlfriend and is in love. Pilots tease another pilot and say that they hear he buys lingerie for his girlfriend and the scene ends in laughter. While flying, a pilot tells another pilot over the radio that he's tired, but the girl last night was worth it.

VIOLENCE/GORE 5 - Throughout the film numerous military fighter plane combat sequences depict close quarter air engagements with machine gun fire, crashing planes, in-air explosions, ground explosions with smoke and flames, and buildings being bombed on the ground; also, a train is bombed and flies apart in smoke and flames and a German battleship at sea explodes twice in smoke and flame while crewmen aboard are seen falling off.
► We see about two dozen German soldiers at an air base, shot and killed by American plane crews; we see men fall dead, with staring eyes and motionless (a little blood is seen on the bodies) and we also see two men catch fire and collapse.
► We see four pilots shot in air combat, with blood oozing and flowing from head wounds, one chest wound and one thigh wound; one pilot loses his eyesight and lands at home base blind, another pilot lands with his plane in flames, a third pilot becomes dizzy, passes out and crashes into a farm field (it is assumed that he is dead) and the fourth pilot says he cannot breathe, coughs up blood in his cockpit, slumps to the side, he is silent and his eyes stare unfocused and his plane crashes to the ground in smoke and flame.
► After a pilot lands with his plane in flames we hear that he suffered 3rd degree burns and we see his peeling face; the scene cuts to him lying in a hospital tent with his face swollen and charred and we hear that he will recover.
► An American officer enters a US Officer's Club in Italy, where he is called a derogatory term for African-Americans, and he is told to leave because it's a "white's only" club; the African-American officer punches one man, a fistfight ensues and the camera cuts to the African-American officer in detention, his commanding officer enters the cell and argues with him about fighting with whites and we later see the detained officer receiving a reprimand and new call to duty.
► An American officer ejects from his damaged plane, lands in German territory and is rushed by four Nazi soldiers; they do not injure him. A POW is seen entering a Nazi prison camp building, an American CO explains to him that a secret mission is underway and we see him helping to draw Nazi fire as men escape from several guards firing rifles and handguns (no one is injured).
► A pilot tells another pilot that he is scared with each mission, and that closing the canopy on his fighter plane is like closing his coffin lid. The commander tells the troops, "Victory is saving a bomber with 10 people on board, not taking out a German plane." We hear that an American officer died in a Nazi prison camp, and later hear that he escaped through the woods at night.
► In air base planning meetings, we see black-and-white replay films of air fights. A scene of 100 Flying Fortresses shows at least a dozen bombs drop from each, but we do not see explosions as the planes turn to fly home.

SUBSTANCE USE - An air base pilot discusses his drinking problem with his bunkmate, a man drinks alcohol from a tin cup several times, a man drinks alcohol from a flask three times, a man empties a pint bottle of whiskey on to the dirt floor of his tent, and three Officer's Club scenes show men drinking from bottles and glasses of beer and from rocks glasses holding whiskey. An air base officer smokes a pipe throughout the film, an officer smokes a cigar twice, and an officer says he looks forward to cigarettes and wine on his next leave.

MESSAGE - Segregating people according to race is stupid, immoral and a waste of talent. Embrace your passion and mission, despite the naysayers. 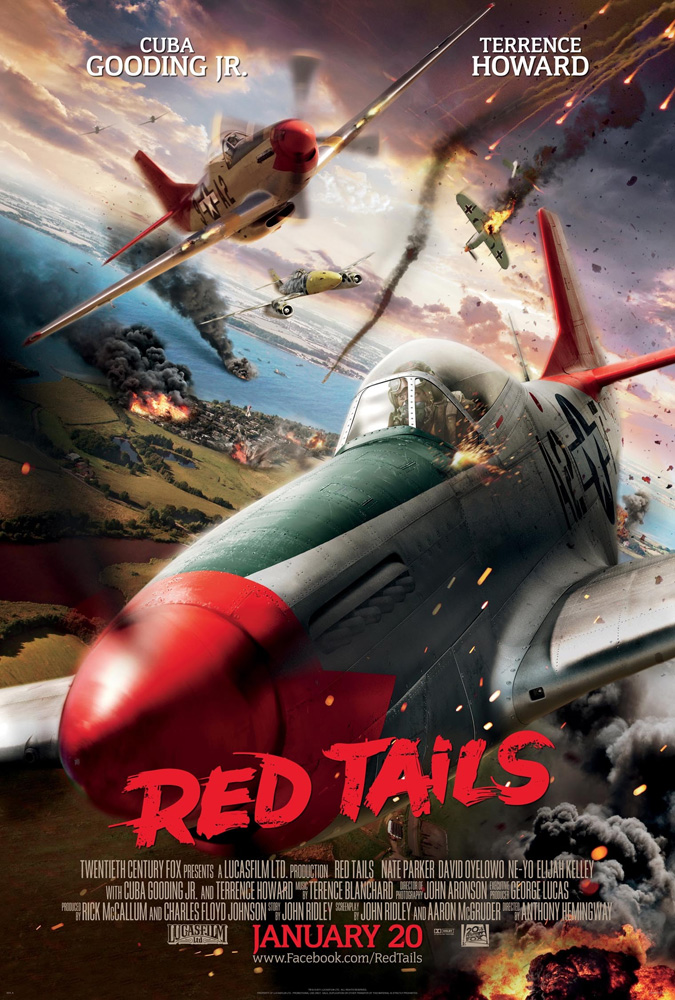