VIOLENCE/GORE 10 - In two flashback scenes, gunfire is exchanged in a battle; we see people being shot (some bloody holes in clothing are visible) and a soldier with blood splattered on his face. In a dream sequence, a man hits another in the back with a hammer, slits him with a knife (blood splatters on the man's face) and then eats his bloody flesh. A man snaps another's neck (we hear a crunching noise) and slits another's throat (lots of blood squirts on a window and from his neck). A couple of men are stabbed (twice we see the knife sticking out of their bodies and once we hear squishy noises as the knife is removed). A man throws a hatchet into a man's back and a man throws a knife into a man's chest. Two men are shot (one of them dies). We hear a thump, see a man hit the ground, and then see a close-up of blood running down his face. We see and hear a man slice another's stomach; the man spits up blood and we see blood seeping from the wound. We hear a slicing noise (it's implied that a man has been stabbed), then see a man's feet as he's being dragged out of a building. A bloody man falls into a hole and hangs by his feet in some branches; blood pours out of his mouth and he briefly chokes another man before dying. Two very bloody men are caught in a large snare trap and we see them die. Two wounded men fall off a cliff. A man falls down a rocky hill and gets bloody cuts on his face and torso (we later see him with a bloody bandage wrapped around his stomach). A man jumps off a cliff and falls through many tree branches, rolls down a hill (he runs into a bloody man and they roll together for awhile) and then falls into a hole (he has bloody cuts all over his face). A man cuts a man's hand with a knife and we see the bloody wound. A man pulls a tree branch out of his shin (we see the bloody wound and hear squishy noises as he removes it). We see a close-up of two men's extremely bloody faces and then see blood pouring from their mouths onto the ground. We see a pile of many extremely bloody corpses; on the bottom of the pile, a man who's still alive -- and is covered in blood dripping from the other bodies -- crawls out. Blood drops on a woman's face; we then see a bloody corpse on a roof above her. We see several bloody skeletons, several bloody corpses with blood running from their mouths, a skull with blood-soaked hair and several bloody, decapitated horses. We see a man hitting a bloody corpse with a hatchet (it looks like the corpse's arm is missing) and it's implied that several men in a later scene eat the flesh. We see a man slice a corpse's leg (we hear lots of squishy noises) and it's implied that the man eats the corpse's flesh. We see a man holding a few logs with a bloody arm on top. A man has a cross painted in blood on his forehead. During an extended fight scene, men hit each other repeatedly with logs, stab each other with knives and a pitchfork and head-butt and choke each other (they get very bloody). A man punches another and pushes him out of his chair. We see a crude drawing of a man with big teeth eating a woman (drops of blood surround the man). We see a man vomit and hear another vomit.

LANGUAGE 1 - A mild obscenity and a mild insult. 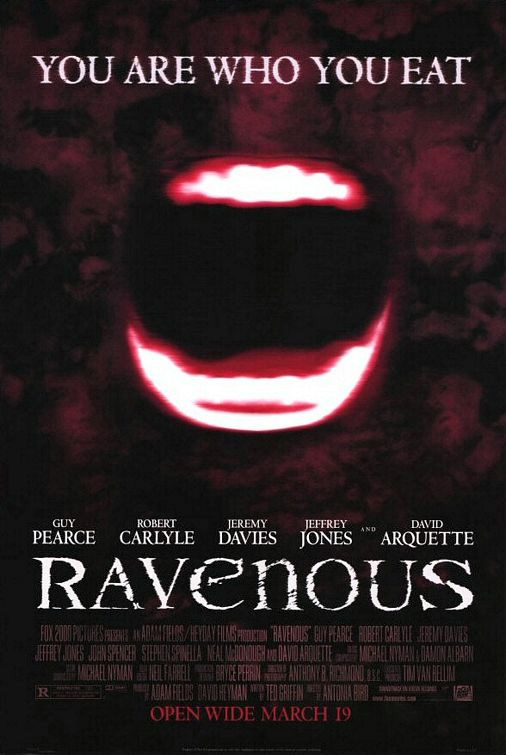