SEX/NUDITY 10 - Lots and lots and lots of sexual innuendo, including references to just about every conceivable aspect of sex: anal sex, oral sex, homoeroticism, multiple partner sex, sadomasochism, masturbation, rape, and necrophilia. Several erotic stories are read verbally containing numerous puns and perversions, covering the above references, and also a story about a priest inserting a communion wafer into a woman's anus (followed by his penis going in as well). Passionate kissing. A man rubs a woman's bare breast under her shirt and she rubs her inner thigh. A man masturbates (we don't see his penis but we see his hand moving back and forth several times). There are three rape scenes: a man rips off a woman's dress and rapes her; we see him humping her and her crying; a man covers a woman's mouth and slams her into a table and rapes her from behind (lifts up her skirt and we see him thrusting into her); a man rapes a woman and then cuts her tongue out. We see a threesome, with a naked woman in between two naked men; the men are thrusting into the woman and there's a close-up of the woman's hand squeezing one man's bare buttocks. We see a completely naked man thrusting into a completely naked woman from behind while they're having sex standing up; she rubs her breasts while he's thrusting. A priest undresses a dead woman and begins to suck her breast and kiss her lips, and then she comes to life and spreads her legs and they have sex (we see him thrusting into her with her legs wrapped tightly around him; she's naked, he's not), but then the man finds he's only dreaming. A woman sits on a man's lap after they kiss and he grinds into her. In several scenes we see full frontal male nudity; the man's genitals and pubic hair are very visible. Several shots in several different scenes of a man's bare buttocks; a naked man grabs his own buttocks. We see three women completely naked (again, full frontal nudity; breasts and genitals are visible). A young girl prostitute rubs her cleavage while trying to attract customers. We see a woman's bare back, bare shoulders and the side of her breast. A close-up of a woman's bare breasts. A woman performs oral sex on a man but we only see her hands on his chest, her head moving and her lick her lips when she's finished. There are several sexual objects on display throughout the movie: a few nude male statues, a painting with a woman showing her breast, several sketched prints of people in erotic positions, several statues of men and women in various erotic positions, a statue of a man with a large penis, small phallic statues that a woman holds in her hand. A man strips and comes on to a priest, telling the priest he's gay. We hear a woman's moaning noises. A man calls the Virgin Mary a whore and slams a statue of her to the ground. A man holds a candle and implies to another man that he's had the candle in his anus. Several times we see men dressed as women, including one dressed as nun, as they act in a play filled with sex: the nun rides a hobby horse erotically (like she's humping it); a cross-dressed man spreads his legs and a man humps him from the front, then from behind, then goes down and pretends to have oral sex with him. Several shirtless men. Lots of cleavage. Marriage between an old man and a girl.

VIOLENCE/GORE 10 - A woman's head is put into a guillotine; we watch the blade drop down on her but we don't see the blade slice her neck. We see several recently decapitated/guillotined heads with blood around their necks. Blood drips from a guillotine blade onto a woman's face. Three rape scenes(see Sex/Nudity). In one rape scene the man cuts off the woman's tongue and kills her (we see him with scissors getting ready to cut her and then we see lots of blood in her mouth afterward; he is covered in blood after the incident). In another rape scene the woman burns the man's face with a hot iron in the middle of the rape. A man grabs another by the throat and throws him into a wall. A man punches a mirror and intentionally pricks all his fingers with broken glass; we see lots of writing in blood. We see a woman's corpse in a pool of blood and water. A man is put in an iron maiden. Two men are dunked several times in a dunking barrel. A woman is whipped numerous times; we see very bloody slash marks and welts on her back. A man whips his bare back with a rope and we see slash marks. A man's tongue is cut out; we see the clamps and scissors ready to take it out and then we hear him violently scream. A man chokes another. We see a recently excised tongue in a jar. A man sets fire to bed sheets and causes a major fire in a building. Talk of mutilation, rape, murder, and sadism. A man apparently killed a 16 year old girl by inserting a crucifix in various places on her. A man spits on another man. A man uses his own feces to write on a wall. A man swallows a crucifix and then dies.

LANGUAGE 7 - About 10 F-words, several anatomical and scatological references, a few mild obscenities, several religious profanities (which could be quite offensive to some viewers), several insults.

MESSAGE - "To know virtue we must acquaint ourselves with vice." 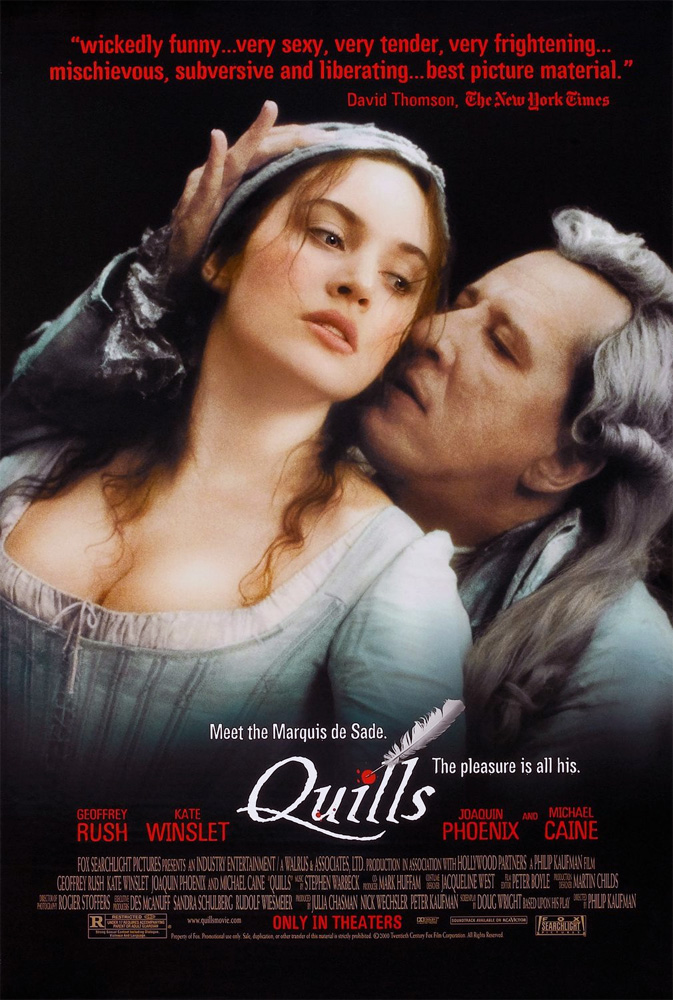