A TV reporter and her camera operator (Jennifer Carpenter and Steve Harris) shadow a group of firefighters on a call to an apartment building where residents appear to be suffering from a very contagious disease, with gruesome symptoms. Also with Jay Hernandez, Columbus Short, Johnathon Schaech, Greg Germann, Dania Ramirez, Rade Serbedzija and Andrew Fiscella. Directed by John Erick Dowdle. [1:26]

SEX/NUDITY 3 - A man makes a bet that for $100 he can have sex with a woman by morning. A man makes a suggestive remark to a woman about being able to "hit the spot." Remarks are made about fire hoses when a woman goes into a locker room and sees a nude man showering. A suggestive remark is made about a "pole hole." A man talks about a "chick-o-meter" that he uses to rate women. A firefighter makes a joke about men wearing panty hose under their uniforms.
► As a woman crawls toward a camera we can see down her shirt and cleavage is evident. A woman is taken into a locker room where men are showering, we see men with towels around their waists and bare-chested, one man opens the door and we see his bare chest and people react to seeing his genitals (we do not see below the waist). We see a man wearing boxer shorts (his bare back and chest are visible). We see a man wearing jockey shorts (his bare chest, back and legs are visible).

VIOLENCE/GORE 10 - Much of the movie is seen through a camera that is filming the events as they happen; there isn't a lot of light and the camera is jerky so it is difficult to discern many scenes, especially when there is a lot of commotion.
► An infected woman screeches and lunges toward men that are walking toward her; she screeches again when bright lights are turned on and finally she attacks a man and bites his neck (we see blood and we see skin being pulled as she tears a chunk of flesh off).
► A man is attacked by an infected man and eaten in a dark room (we hear squishing and crunching). An infected woman lunges toward a man (she has blood on her face and gums) and he beats her to death using a camera (we see each blow and see her head becoming bloodier and bloodier and blood splatters on the lens of the camera).
► An infected woman attacks a man, he beats and kicks her, she then attacks another woman, and the man holds the infected woman off the floor and breaks her neck (we hear a crunch and she is dropped to the floor limp). An infected woman charges toward a man, and he strikes her with a sledgehammer (we hear crunching).
► An infected girl bites her mother's face (we see blood and tissue on the woman's cheek), and then runs away screeching. An infected girl bites a man (they struggle, we hear yelling and screeching and we see blood).
► Many infected people get out of a room, and they attack (we see one woman being bitten and she screams). An infected dog barks angrily and chases a man into an elevator, and it attacks him (we hear biting, tearing, growling and screaming as the doors close). An infected man breaks through a door and grabs a man on the other side, and he bites him and pulls him (the man screams and we see blood on his face).
► We see an infected woman who has bitten her own fingers off (we see blood and stumps). An infected woman is thrown over a balcony (we see her strike the railings on lower floors before slamming onto the ground). We see a woman with a lot of blood on her mouth and chest, she charges toward several people and one of them shoots her (she falls to the floor dead). A man is shot in the head (we see blood splatter and pool on the floor under him). A man falls from an upper floor onto the floor below, landing with a loud splat and we see blood pooling under his head. A man kicks and stomps an infected person (we hear crunching). A man with a sledgehammer strikes an infected dog (we hear it yip).
► An infected man with a leg wound walks into a room where people are gathered and when he steps down his leg snaps under his weight (we see the leg and foot bend unnaturally and hear a snap). A man is handcuffed to a table, injected with a hypodermic needle and a drill is used to drill through his skull and into his brain (blood splatters on the drill and drips from the bit when it is removed).
► A sedated man sits up on a table, grabs a man from behind and tries to bite him (we hear screaming and see the man struggling). A woman in a dark apartment screams and runs, slams into a wall and table and falls to the floor dead.
► A man breaks an apartment door open and we see a woman standing at the end of a long hallway, she moans and rocks back and forth and as we get closer we see that she is foaming at the mouth and has blood on her chest and nightgown. We see a large open wound on a man's leg (broken bone is exposed and blood and tissue are seen). We see a rat in an apartment, and it runs toward a man who steps on it and crushes it (we see blood and intestines on the floor).
► A man with a camera climbs into an open hatch in a ceiling, looks around through the camera, something lunges toward him, and he falls back to the floor below (he's OK). Two people are chased by many infected people, they hide in an apartment and the infected people pound on the door.
► We see a laboratory with what looks like a surgical table, which appears to have blood on it. People wearing hazard suits and carrying guns enter a building. Police with guns surround a building and a woman screams and pleads as they seal the building with plastic sheeting.
► There are many scenes where people walk through dark areas and hear noises and are startled by something. While searching for someone, several people find the remains of a dead human body that has been eaten. A woman is dragged away into the dark and she screams.
► People yell and argue in many scenes and in one scene a man pulls a gun on another man. When emergency personnel arrive at a building, residents report that they have heard a woman screaming.
► A man approaches a woman who is moaning and foaming at the mouth, he helps her up and she vomits (we hear a splat and gagging). A man inside a room vomits blood on a window (we see this from another room).

SUBSTANCE USE - A man appears to be drunk in a couple of scenes.

MESSAGE - Be careful what you wish for. The spread of a pandemic is a frightening, effective weapon. 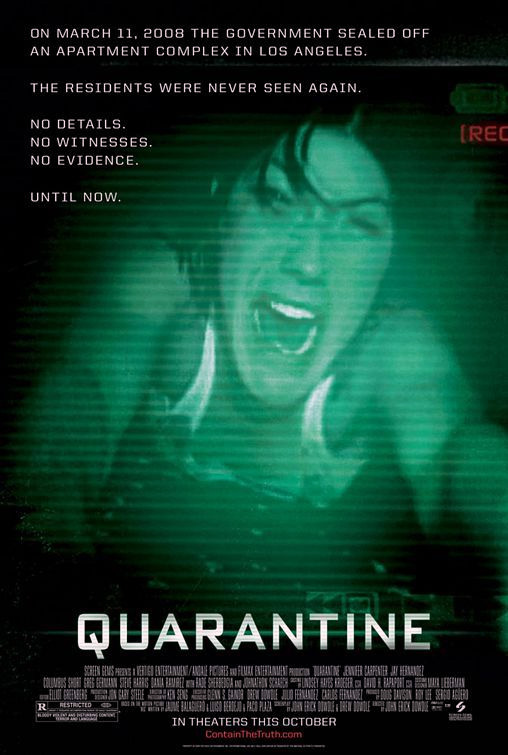