Nathan Lane and Matthew Broderick bring their Broadway hit (which was itself based on Mel Brooks' 1968 film with Zero Mostel and Gene Wilder) to the big screen: Lane is a down-on-his-luck theater producer who is inadvertently convinced by his nerdy accountant (Broderick) that a theatrical flop can be more lucrative than a hit. Also with Uma Thurman, Will Ferrell and Gary Beach. Directed by Susan Stroman. [2:14]

SEX/NUDITY 6 - A woman wearing a low-cut dress that is also cut high on the thigh (revealing cleavage, bare back, bare shoulders, bare thighs) sings and dances around a man, she ends up on top of a desk and when he helps her down, they rub against each other, fall behind a sofa and it is implied that they have sex (we see them kiss).
► A woman sings about, "if you've got it flaunt it" and with other lyrics like "showing my birthday suit" and dances suggestively while two men watch; she wears a dress that is low-cut revealing cleavage and bare back and is also slit high on the thigh revealing bare thigh and stocking top (the two men make a remark at the end of the dance suggesting that they are aroused).
► Two men hug a woman's bosom (one presses his head into her cleavage).
► A man dances into a room and his endowment appears to have been enhanced by padding under tight-fitting pants, creating a prominent protrusion. A man is bare-chested with jewels on his nipples and a man is shown bare-chested during a song and dance scene. Women in skimpy dance costumes dance on-stage (cleavage and bare thighs are revealed), women are shown in low-cut dresses that reveal cleavage in several scenes, and women wear beaded dance costumes during a stage number and they dance with and around a man. We see posters of scantily clad women that reveals cleavage and bare legs. We see a statue of a nude male, and part of its genitals are visible.
► A woman invites a man into a hotel room, she lies back on the bed, and he goes into the room and closes the door behind him (it is implied that they have sex).
► An elderly woman asks a man if they can, "play a dirty little game": she describes the game using sexual terms, pushes the man onto a sofa and says, "I'll be gentle."
► A man and a woman kiss in a few scenes, and a man and a woman kiss in the background of a park scene.
► Many men sing and dance together -- it is suggested that they are homosexual, and they use effeminate gestures, wear leather costumes, etc. A man flirts with another man, a man calls another man "darling," and a man makes suggestive noises and looks at two men suggestively. During a dance scene one man thrusts his hips back and forth and bumps a man standing behind him in the crotch (the man being bumped has an expression that suggests that he likes it).
► A man talks about a "great big casting couch." A man sings a song about elderly women with whom he has romantic (and it is implied sexual) relationships in exchange for money. A man refers to several elderly women with terms like, "hold me, touch me," and "sex kitten." A woman says of a man, "he wouldn't do it unless we got married." A man talks about a "fire down below" and waves his hand over his crotch. A man gestures with his hands as if he is squeezing a woman's breasts.
► A man tells a woman, "we might have several positions for you" when she is applying for a job in his office. A man talks about "pitching woo" and calls women "nymphomaniacs."

VIOLENCE/GORE 3 - A man puts a gun to his head and pulls the trigger three times (it just clicks), and then throws the gun down, and it fires.
► Two men struggle over a book, one sits on the other, one hits the other in the stomach, another man enters the room and shoots a gun into the ceiling (no one is shot).
► A man throws water in another man's face then slaps him in the face hoping to snap him out of a fit he is having, but it does not work. A man slaps a man in the face, a man shoves a man, and a man grabs another man by the chains around his neck.
► A police officer holds a gun on a man. A man with a knife lunges at another man (in a stage production).
► A man hits another man on the arm. Two men run across a street and are nearly hit by cabs driving by.
► A man trembles when another man yells at him. A man dangles from the hook on the back of a door. A man opens a door crushing a cigar in the mouth of a man who's standing behind the door.
► A man swings a cat by the tail, and we hear the cat screeching. We hear clambering behind a door and a man calls out that he has broken his leg. We hear a noises and a ruckus and a man says, "I broke my other leg."
► Two women are knocked down by a crowd rushing out of a theater (they do not appear injured). A man falls over a sofa. A man collapses.
► A man yells at two men. A man yells and people in the room recoil. A man screams and runs from a man and he hyperventilates and quivers while rubbing a small piece of blanket cloth on his face. A man lying on a sofa covered by newspapers startles another man when he sits up and yells.

SUBSTANCE USE - A man drinks champagne and a woman smokes a cigarette.

MESSAGE - Even the most traumatic events in history can be used as comedic fodder. 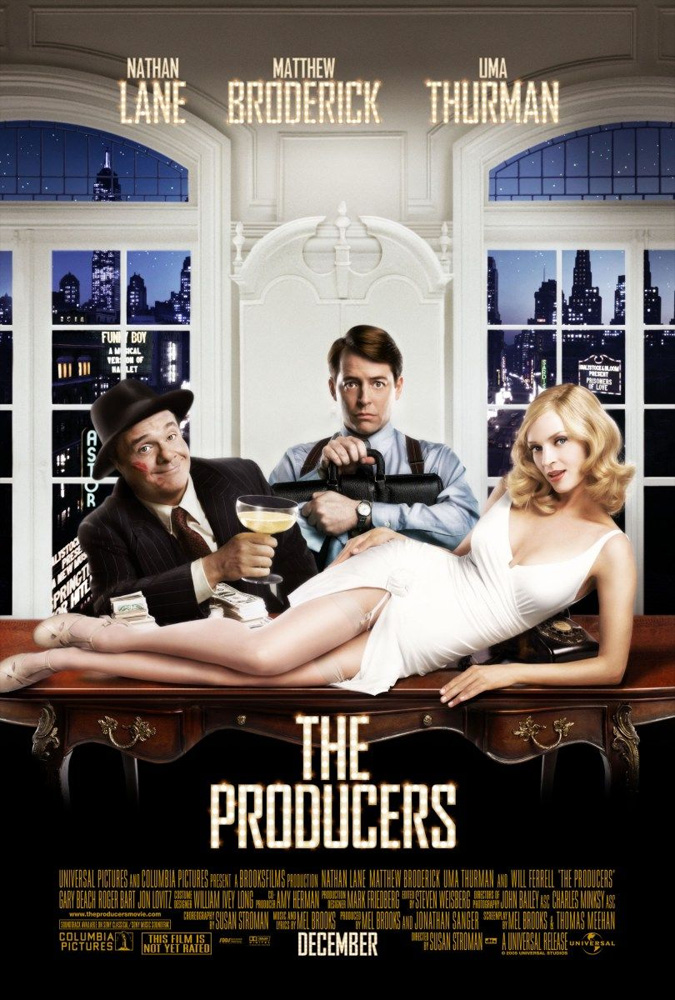