When an astronaut (the voice of Dwayne Johnson) lands on a presumably uninhabited planet and finds a population of aliens, he needs help to get back to his spaceship or he'll be marooned. Because they fear that he is there to harm them, the only one who is willing to help him is a young alien teen (voice of Justin Long), who really just wants to get on with his life. Also with the voices of Gary Oldman, John Cleese, Freddie Benedict, Jessica Biel and Seann William Scott. Directed by Jorge Blanco. [1:31]

VIOLENCE/GORE 3 - Aliens are green, humanoid with four fingers and four toes, pointed, floppy ears and no nostrils.
► A man is beaten by aliens with sticks (we hear repeated thuds and grunts). Two soldiers punch each other in the face.
► An alien doctor holds a saw with a whirring blade and approaches a man who is strapped to a table (presumably to remove the man's brain): a robot snatches the saw and stops the procedure.
► Explosives detonate causing a military facility to burst into flames, an alien is knocked unconscious, and he is pulled out of the flames. A man and an alien are chased and shot at, a tank fires at them, there is a large explosion and they are thrown to the ground.
► A man crashes into an alien man on a bicycle, they speed along a road, sail through the air and crash to the ground (no one is hurt). A man screams and runs through streets when he encounters aliens: an alien dog shoots its tongue out and it sticks to the man's helmet, and then again to the back of the man's space suit as he runs away.
► A robot tackles an alien to the floor. A man crashes through a window and into a house where an alien woman screams and an alien boy guzzles a bottle of medicine. An alien finds a man hiding, they both see each other, scream and run. An alien boy is struck in the head with a telescope and falls to the floor (he's OK).
► An alien runs into the street and is nearly hit by a car. A robot is chased by armed military personnel, it runs through a diner, it flings trays at them, they run through a bowling alley, and one soldier slides head first into bowling pins. A man hits a robot on the head with a rolled up newspaper.
► Many alien women throw cups at a man when he enters a room. An alien teacher screams in a classroom and the children hide under their desks. A woman is chased by two military persons with sticks. An alien dog perched on top of a mailbox snarls at an alien postal person who had just teased it at a previous stop; the scene cuts away but we hear the postal person scream and later see him with bruises on his face.
► Armed military personnel surround a flying vessel, items from inside the vessel scatter on the ground, an I-pod begins to play music, and aliens cower to the round and cover their ears and one shoots it (we see it in pieces). An alien fires a canon, it breaks through a billboard, through a water tower, and crashes into a statue. A flying vessel flies through explosions and flames toward a hatch and the building it flies out from collapses.
► A loud rumbling is heard from underground, a large chasm opens in the street and a robot falls in the opening. A swirling dark cloud forms over a planet, winds blow and a flying vessel lands hard on the ground; aliens watch as a man emerges. Alarms sound in a secured military area, a robot breaks out of a containment capsule, it is surrounded by armed military personnel, and it speeds away unharmed.
► In a movie a large flying vessel looms over a car, the driver speeds away, the vessel fires at the car, the vessel lands and opens fire at armed military personnel (we see one soldier struck by the blast and he disintegrates) and others are put into a trance.
► An alien doctor talks about removing a man's brain. A man tells an alien husband and wife that their son is a zombie. A man tells an alien to attack armed military personnel so that the man can get to his ship. An alien newscaster asks, "Will our species survive?" An alien declares this is a "Battle for our world." An alien says of humans: "They're gonna eat our brains." An alien yells to a group of other aliens that "They've come to harvest out organs." A comic book reads "Surrender or die." A character says, "Resistance is futile." An alien is dressed up in a health and beauty aid costume and says, "What I do best is a suppository." An alien says, "He's a zombie" of another alien.
► An alien boy vomits (we hear a splat but do not see goo). An alien dog urinates in a couple of scenes and we hear sizzling and see a greenish mist that indicates the urine is an acid; in one scene it urinates on a light pole that then tips to the side (as if the metal is burned away). A robot locked in a cage is frightened and "urinates" a black puddle. A robot squishes an alien insect (we hear a squish and see a smudge on the ground). We see two brains floating in a liquid in a lab.
► An alien hands another alien a cork and tells him to use it against "the alien probe"; he then asks for it back because that was the one he had already used. An alien dog sniffs the "rear end" of a robot and they circle each other.
► We see two aliens with bandages over their eyes in a medical lab. When it rains on an alien planet rocks fall from the sky.

SUBSTANCE USE - An alien boy guzzles a bottle of medicine.

MESSAGE - Some aliens really do come in peace. Aliens and humans aren't so different from one another. 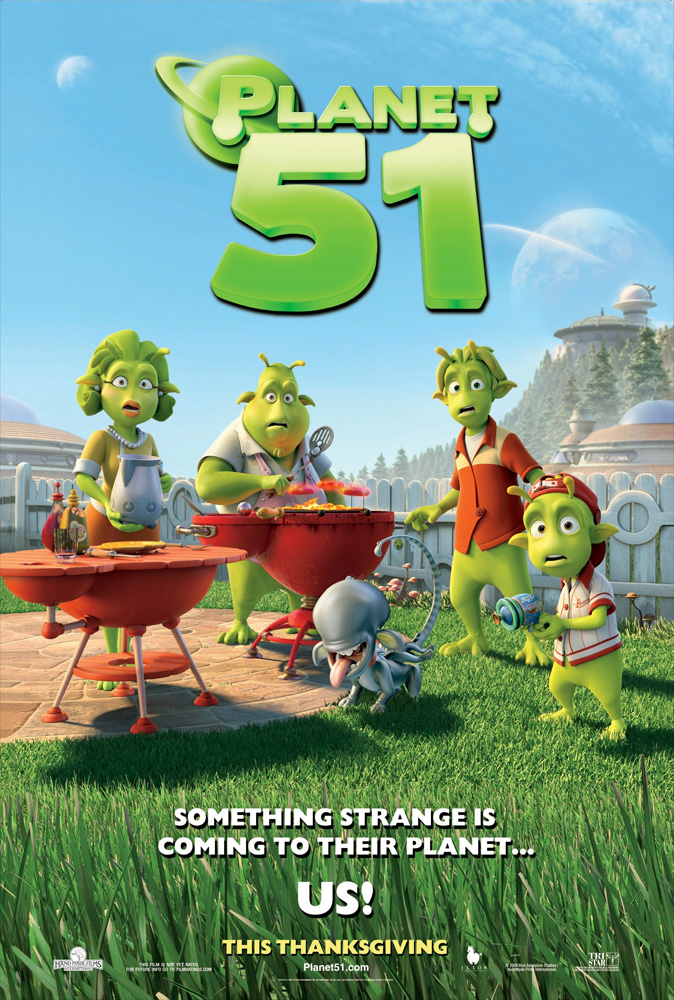